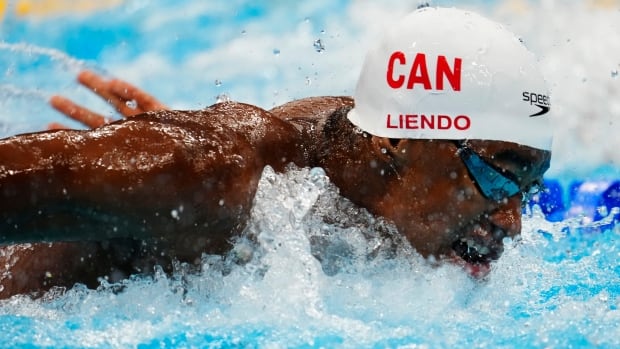 Canadian swimmer Josh Liendo is a man on a mission and he’s not afraid to talk about it.

The 19-year-old has been taking down Canadian records in his pursuit of being one of the best swimmers in the world.

On Wednesday night at the Canadian swim trials in Victoria, Liendo broke his own national record in the 100-metre butterfly with a blistering time of 50.88 seconds.

“It was definitely the plan,” he said. “I want to move forward in the future but I wanted to be at this point right now.”

Liendo is not shy about his confidence in the pool — he’s the type of athlete who commands attention when he shows up at the venue.

“I want to get some medals on the international level,” he said. “That’s my goal and I’m not shying away from that. It’s something I want to do and I’m going to say it proudly.

“I just say it. Even if I don’t get there I’m going to say my goals and make it clear to everybody what my goals are. I feel that’s what goal-setting should be. You should say what you want to do.”

There’s a presence about Liendo. And that’s intentional.

“I like to have a little swag. I like to do things my way. And I like to have fun at the end of the day. Some of that swagger and that confidence comes from international experience now and me knowing I have the ability to be great,” he said.

His greatness is building and he’s making history along the way.

This past December at the short course world championships in Abu Dhabi, Liendo earned his first medals at a senior international event. He won individual bronze in the 50m and 100m freestyle events and was also part of the 4x50m mixed relay that won gold.

With those medals, Liendo became the first Black Canadian swimmer to win a gold medal, and the first to win an individual medal at a major international championships or Games.

That representation is part of what’s motivating Liendo these days.

“It’s so important and it’s exciting to see,” Liendo said. “You love to see it in this sport that there’s more people like me.”

During these trials another young up-and-coming Black swimmer, Antoine Destang, has caught the attention of Liendo – it’s something he’s seeing more of in the sport in Canada.

“I saw Antoine in one of the junior finals. Another Black boy. And we love to see it. I remember my first trials were here and I was 14, a kid like him. Once you see someone like you, it’s more likely you’ll see some more representation in the sport in the future.”

The Markham, Ont.-native spent part of his childhood growing up in Trinidad before moving back to Canada to take his swimming career to a different level.

He competed in his first Olympic trials last June. In a lot of ways it was his breakthrough moment.

On the opening night Liendo won the 100m fly event. But he was saving his best for last in the final event of competition.

Liendo blasted to a personal best time of 48.13 in the 100m freestyle final to book his ticket to the Tokyo Olympics at just 18 years old.

That swagger he talked about was evident that June night.

“I knew I had to be the boss on that first 50,” he said that night after the race, beaming.

He tries to carry that mentality into every race he competes in.

He’s swimming in all those events at the trials and adding the 50m fly to his schedule as well.

In the 50m fly heats Thursday morning Liendo posted a time of 23.72, just off the Canadian record. He’ll compete in the final of the event in the evening.

More than anything Liendo wants to change the way Canadian male swimmers are looked at on the international stage and he’s unapologetic about sharing his personal goals in the most public way.

“We’re coming. We’re coming and working on it. And there’s momentum,” he said.

Horse racing tips: Templegate NAP made a big impression on hurdles debut and can…