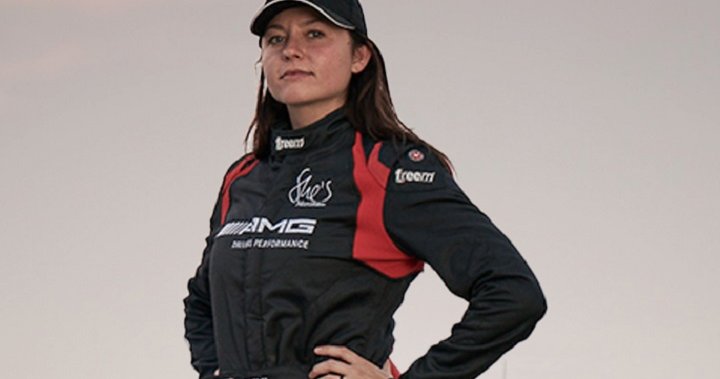 Demi Chalkias grew up in the country, on the outskirts of Stoufffille, Ont. The family had no cable or internet, but there were plenty of dirt bikes, ATVs and tractors to play with.

“I loved driving anything with an engine,” she said.

Chalkias would set up a course on their driveway using basketballs as pylons and steer one of their many vehicles through it, sometimes backwards.

She went on to be a high-level triathlete, but when a serious hip injury ended her career, she turned to driving.

“You feel kind of sorry for yourself for a while, but then you start thinking, ‘OK, well, what can I do? I’m not useless.’

“So I put myself into go-karting, and it turned out that I had a natural talent for the sport and a huge passion. And so, I just pursued it full force and made a career out of it.”

Chalkias and Havrda were guests of Mercedes at the Montreal Grand Prix this past weekend as part of the “She’s Mercedes” platform, a global initiative which aims to empower women in the sport.

Chalkias says motorsports provides a rare level playing field when it comes to physical stature. Being big and strong isn’t an advantage.

“The car sees no gender, it makes zero difference if you’re female or male, or whatever you identify by,” the 27-year-old said.

Still, in a sport in which few could name a female driver beyond Danica Patrick, the percentage of female drivers is minute. Only two women have ever qualified and started in an F1 race: Maria Teresa de Filippis in 1958-59 and Lella Lombardi, with 17 starts between ’74 and ’76.

Mercedes’ F1 superstar Lewis Hamilton is a big supporter of women drivers. He said that a walk down the paddock at the Montreal Grand Prix was proof of the lack of diversity in the sport, from drivers, to mechanics to media, in both race and gender.

“This has been a male-dominated sport for a long, long time,” said Hamilton, the first Black F1 world champion — he’s won seven. “There is so much work that we need to do to improve the representation and opportunities for women in all levels.”

“(The sport) has not shifted anywhere near as much as I would have hoped for,” he added.

The W Series opened the door for 20 female drivers when it launched in 2019. The all-female single-seater championship teamed up with Formula One for eight races. The Montreal Grand Prix currently isn’t one of them.

Caitlyn Jenner owns a team in the W Series, which is free to enter, and all the cars are the same, erasing any financial advantage.

Canadian Taegen Poles was one of 54 drivers from around the world invited to travel to Austria for W Series qualifying, calling it a “fantastic experience.”

The 23-year-old Poles is completing her masters at Queen’s University in applied science in materials and nuclear engineering, hoping it will open more doors in the similarly male-dominated field of mechanical engineering in motorsport.

Poles said while the sport is technically “co-ed,” she’s often been the only female in races. She was one of 17 Canadians in the field of over 300 for the Rok Cup SuperFinal karting event in Italy last year, and the only female in her class of about two dozen.

She believes financial support is the biggest barrier.

Chalkias bought her first race car. She quit university to work two serving jobs, doing the morning shift at Eggsmart and the night shift at Jack Astors, until she’d banked the $12,000 to buy a used car, plus a helmet.

“I pumped caffeine pills to stay awake,” she laughed. “I smelled like a walking deep fryer.”

“For however long my eyes would stay open (in between shifts) I’d work on sponsorship proposals,” she added. “The hustle was very real. It’s very humble beginnings into the sport, but it just makes you so much more grateful for the opportunities that you’re given.”

Chalkias won the 2018 GT4 Championship and in 2020 became the first woman to win the CASC GT3 Championship. She recently locked down a full-time ride in the Mercedes-AMG GT4 with JMS Motorsports and will compete at the 24 Hours of Spa in Belgium this year.

That night she researched driving schools from their hotel.

The 16-year-old from Comox, B.C., said the overnight endurance race last fall was “pretty insane, but a great experience.”

“Cars in front of you would dip their wheel into the desert practically, into the sand, and it would kick up a whole dust cloud, and you would just go straight through it. And for a second, you’d be thinking, ‘Where am I going? Am I going straight still? Am I on the track?”’

Havrda tested with the W Series in Arizona in January, but was told she didn’t have enough experience. She’ll compete in the US Formula 3 series, and hopes to parlay good results into another shot at the W Series.

The W Series’ next stop is at the British Grand Prix on July 3 in Silverstone.