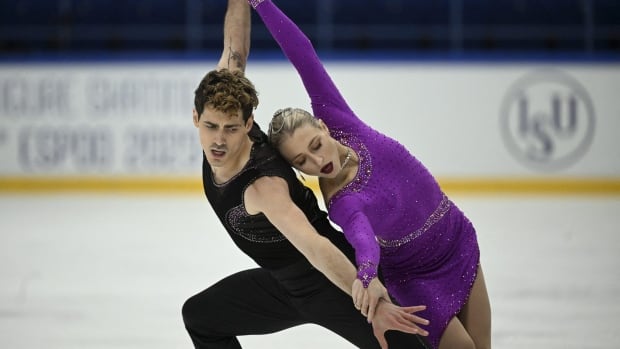 Canadian ice dancers Piper Gilles and Paul Poirier arrived at the Grand Prix Final amid what is so far the best season of their partnership.

Gilles and Poirier captured gold in both of their ISU Grand Prix assignments, setting the Canadians up as a favourite to claim the Final title this week in Turin, Italy. Live coverage of the entire event will eb available at CBCSports.ca, the CBC Sports app and CBC Gem.

But Gilles and Poirier, who had pondered retirement last summer, haven’t paused to reflect on their terrific season so far. They’re much too busy for that.

“We’re very thrilled with the results, we are happy,” she added. “I think we’re just trying to be as present as possible.”

The 2022 Grand Prix Final in Turin, Italy is shaping up to be a dynamic event with a pair of Canadians poised to take gold. Asher Hill previews the competition.

Gilles and Poirier won their Grand Prixs — Skate Canada International and Grand Prix Espoo — with the two highest scores in the world this year. Their best of 219.49 two weeks ago in Finland is nearly six points better than Italy’s Charlene Guignard and Marco Fabbri.

“I think there’s a whole confluence of factors and it’s really hard to necessarily say that we’ve been successful because of one specific thing,” Poirier said. “I think our mindset has helped.

The 30-year-old Gilles and Poirier, who turned 31 last month, skate their short dance to Lady Bri’s “Do What I Do.” Their free dance is a Madonna selection from the movie “Evita.”

Poirier said the first year of a four-year Olympic cycle is always a chance for skaters to reset. After a couple of challenging seasons all but erased by COVID-19, and then a disappointing seventh place at the Beijing Olympics, the Canadians’ summer break was several weeks longer than it normally would be.

The extended downtime appears to have helped.

The Grand Prix Final features the top six skaters or teams from the Grand Prix circuit. Gilles and Poirier, whose top Final finish was fifth in 2019, have company this week. Canadians Laurence Fournier Beaudry and Nikolaj Soerensen earned a spot in the Final after capturing gold and silver in their Grand Prix events.

Following the Final, Gilles and Poirier will have a brief break before the Canadian championships in Oshawa, Ont., kick off the second half of the season, starting Jan. 9.

“This time of year is always challenging, because there’s so many competitions that are close together, and not a lot of recovery time,” Poirier said. “And that’s something that all the skaters are dealing with.

“The trickiest part always heading into this time of year is just managing energy, trying not to get sick, and feeling good. I think we’re feeling good, we’re feeling confident, and we’re excited to go out and compete again.”

Hospital financial decisions play a role in the critical shortage of pediatric beds for RSV patients: “It really has to do with dollars”