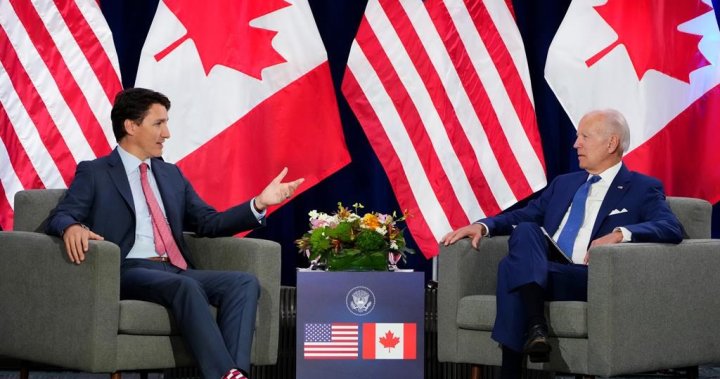 Canadians are growing more confident in the United States as a trusted and reliable international ally, but losing faith in the man who’s currently running the country, a new poll suggests.

In the Pew Research Center survey released Wednesday, only 61 per cent of Canadian respondents said they have confidence in President Joe Biden to do the right thing on the world stage _ a steep decline from the 77 per cent who said the same thing in 2021.

At the same time, 84 per cent of Canadians who took part said they consider the U.S. a somewhat or very reliable partner _ a 16-point increase over the previous year, with 21 per cent describing their southern neighbour as very reliable, compared with 11 per cent in 2021.

Those results are broadly in line with the centre’s findings in other countries around the world, and likely reflect ongoing momentum following Donald Trump’s departure from the White House, said Richard Wike, Pew’s director of global attitudes research.

“That reliability measure is definitely one where we’ve seen some movement in a positive direction, with more people _ including in Canada _ saying that the U.S. is a more reliable partner,” Wike said.

“Last year it was positive, and it’s even more so this time around.”

For Biden, however, Pew found precisely the opposite, although Wike said that probably represents a cooling of post-Trump euphoria than outright disappointment in Biden’s performance to date.

2:15
Biden calls approval of COVID-19 vaccines for kids under 5 ‘a monumental step forward’

“Last year, he benefited in a lot of places, in part, from not being Trump, who was very unpopular in most of these countries,” Wike said.

“It’s important to note that there’s still positive for Biden ? it’s about six in 10 across these countries who do have confidence in him.”

The Canadian portion of the survey was conducted by telephone with 1,324 respondents between Feb. 14 and April 24, and carries a margin of error of 3.3 percentage points.

Biden has been struggling for months to get political traction among Americans in a midterm-election year, a common plight for new presidents but one that has been dramatically amplified in the aftermath of the COVID-19 pandemic and the global impact of the war in Ukraine.

With inflation and gas prices testing new thresholds, Biden’s approval ratings have been plumbing new depths. Only 39 per cent of respondents to a recent USA Today/Suffolk poll gave the president a passing grade, with 47 per cent saying they strongly disapproved of his performance and seven in 10 saying the country is on the wrong track.

U.S. inflation at its highest level in 4 decades

Outside the U.S., last year’s botched withdrawal from Afghanistan hasn’t helped matters: while respondents in 17 countries narrowly supported the decision to pull U.S. troops, they widely disapproved of how it was handled.

In Canada, 50 per cent of respondents said pulling out was the right decision for the U.S., with 40 per cent disagreeing and 10 per cent saying they didn’t know. But 62 per cent said it was done badly, compared with 33 per cent who said it was handled well.

“In every country except Germany, confidence in Biden to do the right thing in world affairs (was) much lower among people who think America’s withdrawal from Afghanistan was handled poorly,” Pew said in a release.

Among those Canadians who said the withdrawal was mishandled, only 54 per cent said they trust the president to do the right thing in world affairs.

While it canvassed participants for their attitudes toward NATO and Russian President Vladimir Putin, it did not include any specific questions pertaining to Russia’s invasion of Ukraine, which began on Feb. 24.

0:37
Biden falls off bike during weekend trip to Delaware: ‘My foot got caught’

Biden falls off bike during weekend trip to Delaware: ‘My foot got caught’

But Wike said the results likely reflect the sense of international solidarity that was emerging at the time toward Ukraine and its allies, including the U.S., which was key in building a global coalition of opposition to Russia’s aggression and providing Ukraine with weapons and aid.

“I think it’s logical to conclude that some of that increase, in terms of people seeing the U.S. as reliable partners, is probably tied to the perception that the U.S. is working closely with allies and partners to support Ukraine.”

The Pew survey found few surprises when it came to attitudes in Canada and around the world toward Putin and Russia.

Trudeau meets with Biden, California governor at Summit of the Americas

Nearly nine in 10 Canadian respondents _ 89 per cent _ said they have no confidence in the Russian president to do the right thing regarding world affairs, compared to 34 per cent in 2001, a result broadly in line with the all-time lows recorded in other countries.

Similarly, member countries reflected a generally positive attitude toward NATO, including strong increases in support among respondents in Germany, the U.K., Poland and even Sweden, a non-member that has since applied for membership in the military alliance.

In Canada, 65 per cent of respondents said they have a favourable opinion of NATO, down two percentage points from the 2021 survey.