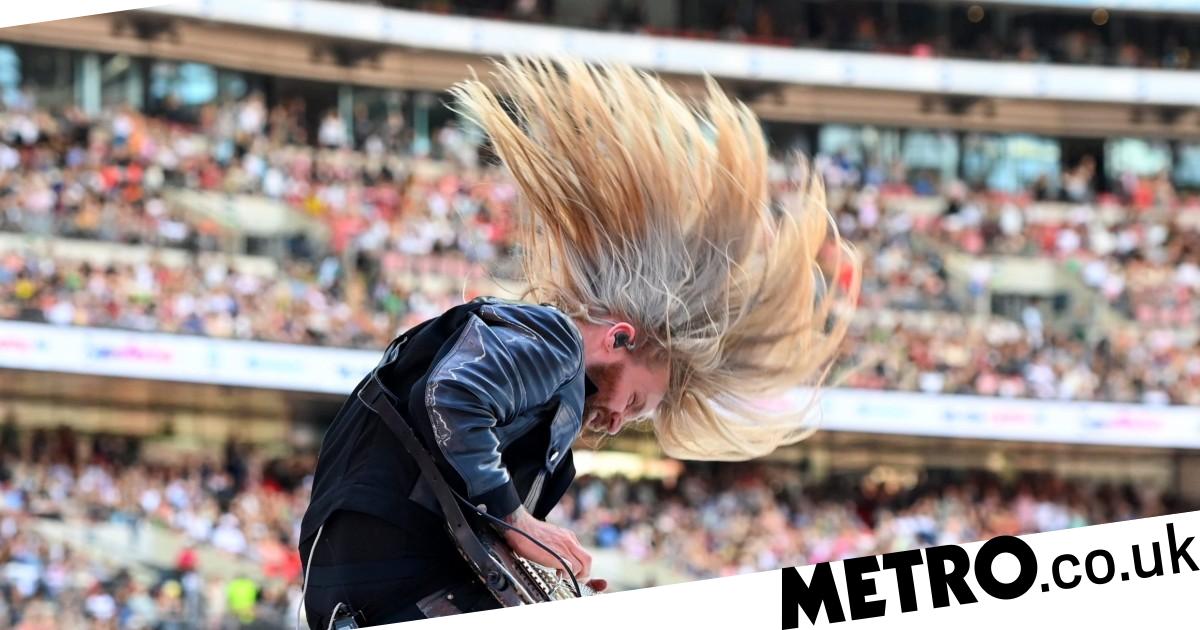 Sam Ryder was clearly having the time of his life at the Capital Summertime Ball, where he took to the stage on Sunday alongside a host of other artists.

The yearly event returned to Wembley for the first time since 2019, after being cancelled two years in a row over Covid restrictions.

But with thousands of fans and a stellar list of acts ready to make an appearance at Wembley, it didn’t disappoint.

With 80,000 Capital FM listeners all ready and waiting for the UK’s biggest summer party, it brought with it some truly memorable performances.

Despite only being added to the list of artists set to rock the stage earlier this week, Eurovision runner-up Sam gave his all in front of the crowd.

In brilliant snaps, he can be seen whipping his long locks back and forth during a performance of his song Space Man.

The newly certified national treasure beamed as he donned a funky denim co-ord number and wore his incredible hair down.

While he didn’t quite reach Number One on the Official Charts, coming in at second place, he did top Capital’s Big Top 40 chart which is based on downloads through Apple and iTunes.

Others who took to the stage on Sunday included George, who, like Sam, was fresh off performing last weekend at the Queen’s Platinum Jubilee: Party At The Palace concert.

He looked thrilled to be performing armed with his electric guitar and smiled away for the cameras.

George’s latest album, Gold Rush Kid, came out on Friday and has already been met with extremely positive reviews.

Elsewhere, Becky Hill brought a load of sass to the event as she got the crowd well and truly hyped up for the summer ahead.

She wore a striking low-cut camo print leotard with adorned with sequins and a big pair of red lips on the front.

Becky finished off her look with knee-high mesh-style gold heels and her hair in her sleek signature ponytail.

The singer treated the crowd to some of her biggest hits such as Better Off Without You, Run and Heaven On My Mind to get everyone grooving.

Ed earlier revealed he had double-booking himself on Sunday, with his latest arena gig for his +–=÷x Tour., meaning he had a very limited amount of time to make it up to Manchester’s Etihad Stadium for tonight’s show.

Either he didn’t notice the date clash, or, in fairness, he was happy squeezing both gigs into one day, but had to make the 200-mile trip up to the city straight after.

As did his support act Maisie Peters, who has been opening for Ed each evening across his UK and Ireland tour.

The pair kicked things off, with Ed at 2pm, with Maisie following on at 2.20pm, allowing them both to make the dash up to Manchester.

Harry Styles closed the evening in style, highlighting his toned physique in a monochrome jumpsuit as he thrilled the crowd at Wembley Stadium.

He teamed the outfit with a pair of black Vans, which was probably the most practical option given all the prancing he does on stage.

Following his appearance at the Summertime Ball, the northerner heads back to his roots for two shows in Manchester on Wednesday and Thursday, for the latest of his Love On Tour concerts.