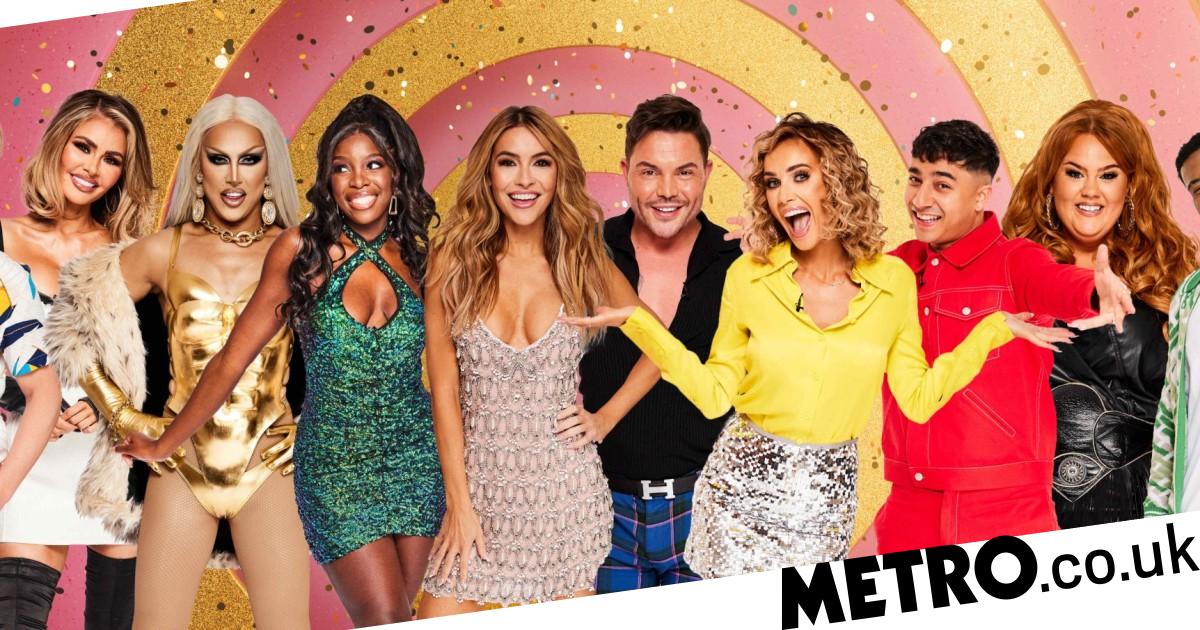 Celebrity Karaoke Club is about to return to ITV, and will see famous faces going head-to-head as they perform in solo performances and group battles.

Ibiza Weekender’s Callum Izzard, Dancing on Ice pro skater Matt Evers and social media stars Arron Crascall and Queen Mojo will also be taking part as the celebs take to the karaoke stage to give the performance of a lifetime.

‘Like previous series, every performer will also be a karaoke judge, so they’ll all need to impress their fellow celebrity competitors if they want to win. At the end of every episode someone will be sent home and new celebrities will join the competition hoping to be crowned the karaoke champion.’

Last year’s reigning karaoke champion AJ Odudu and drag karaoke finalist The Vivienne will pay the contestants a visit to offer their best advice, tips and tricks of the trade.

Let’s take a look at the celebrity contestants below…

Chrishell – who will make her UK TV debut in Celebrity Karaoke club – rose to fame after starring in Netflix’s reality series Selling Sunset, which follows the lives of the ridiculously glamorous female realtors at The Oppenheim Group in LA.

The 40-year-old reality TV star and actress split with her boss Jason in the most recent season of the hit show, and is now dating Australian musician G Flip.

CBBC presenter Karim Zeroual was a finalist with pro dancer Amy Dowdon on Strictly Come Dancing in 2019, losing out on the Glitterball Trophy to Emmerdale’s Kelvin Fletcher and Oti Mabuse.

The 32-year-old reality TV star recently confirmed that she back with Dane Bowers after the couple briefly split up, and they’re already making plans to have children together.

It was also reported that the pair have signed up for the latest series of MTV’s Ex on the Beach.

Love Islander Kaz Kamwi took part on the dating reality TV show back in 2021, where she forged a close relationship with Liberty Poole.

The 26-year-old left Love Island coupled up with Tyler Cruikshank, but the pair confirmed their split towards the end of last year.

Towie star Chloe Sims has featured on the Bafta-winning ITVBe reality series since 2011.

The 40-year-old mum-of-one also took part on Celebs Go Dating in 2019. It was recently reported that she and sister Demi Sims have survived a Towie cull, which has seen 10 cast members being axed from the show.

Bobby Norris is another Towie fan favourite, having appeared on the series since 2012.

The star has also appeared on Celebs Go Dating, Celebrity Ghost Hunt and Celebs on the Farm.

The presenter and activist has also been campaigning to make online homophobia a specific criminal offence, after sharing his experience of being subjected to homophobic abuse on social media.

Last year, he revealed he would be stepping away from Towie to focus on other projects, and wouldn’t be appearing in series 29.

Ibiza Weekender’s Callum Izzard has also appeared on Ex on the Beach and Celebs Go Dating.

Callum proposed to former Love Islander Georgia Steele on the winter spin-off of Ex On The Beach, after just one month of dating. The couple are no longer together.

Dancing on Ice pro skater Matt Evers has been on the hit ITV show since it first aired in 2006.

The star has skated with a number of celebrities during his time on the hit show, including Gemma Collins, Pamela Anderson, Sally Dynevor, and made history in the programme’s first-ever same-sex pairing with Ian ‘H’ Watkins.

Social media star Arron Crascall is a comedian, vlogger and DJ who uploads pranks and funny complications on YouTube.

Mojo – who has a combined following of over 260k across Instagram and TikTok – is known for her motivational messages and spreading body positivity and body inclusivity across her platforms.

Prince William And Kate Middleton Are Clearly Fans Of This U.S. Pastime