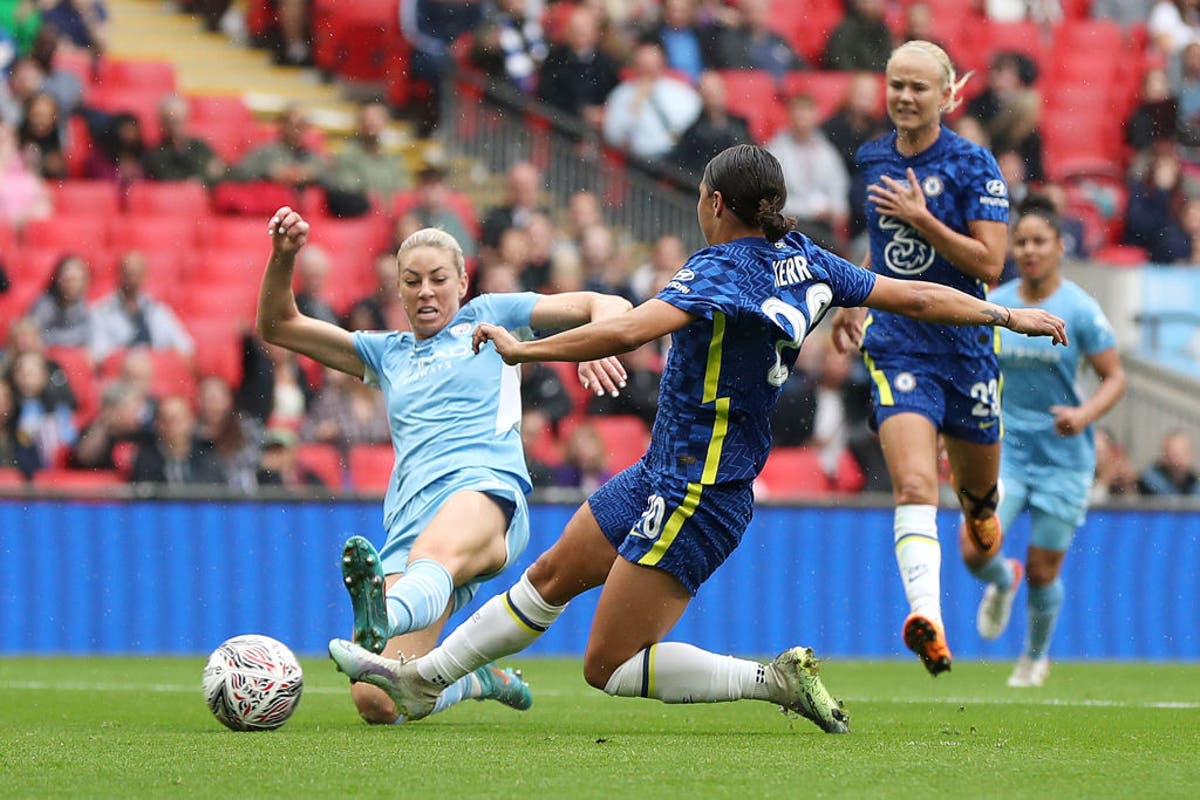 Wembley Stadium takes centre stage all weekend in the football world and we’re back for the Women’s FA Cup final on Sunday, where Chelsea will face Manchester City.

Emma Hayes’ side won this competition last season, beating Arsenal in the final, so while they’re aiming to retain their own trophy it’s also a case of attempting to do the double-double: Chelsea have been dominant over the last few years and won the FA Cup and Women’s Super League double in 2020/21 and are possibly 90 minutes from doing the same this time around. They clinched the WSL title last weekend thanks to a comeback 4-2 win against Manchester United, with FWA Footballer of the Year Sam Kerr netting two spectacular efforts.

Man City, on the other hand, fell somewhat short in their league ambitions this term – finishing third, nine points off the pace – but their reasons for optimism are boosted by the fact they beat Chelsea in the Women’s League Cup final back in March, a second half comeback leading to 3-1 the scoreline on that occasion. Follow all the team news and match action as Chelsea face Man City in the Women’s FA Cup final below:

24 mins: Shaw suffers a knock after a collision with Cuthbert and requires some treatment before the game can resume. She has a brief chat with manager Gareth Taylor before returning to the field of play.

We are back underway as England flicks a high ball on towards Harder but Greenwood heads the danger clear.

22 mins: The match has certainly settled down a lot since that opening five or 10 minutes when Man City were well on top.

You feel this slower tempo might be just what Chelsea want. If they can dictate the pace then Man City will struggle to hurt them with their pace in behind.

20 mins: Kelly does superbly down the right as she darts to the byline and digs out across but Chelsea keeper Berger is there to claim.

The ball is in the net! But it’s offside. Kerr sets off behind the City defence and knocks it past Roebuck before tucking home but she was several yards offside.

17 mins: Chelsea are definitely growing into this match now. They have dictated the tempo for the last five minutes or so without really troubling the Manchester City back line.

City have it now though as Shaw tries to drive at Carter but the Chelsea defender does well to get her body in front and usher the ball out for a goal kick.

14 mins: Chelsea win themselves a free-kick on the halfway line and are beginning to find their feet in this match as they enjoy a lengthy spell of possession.

Stanway chops down Harder and it’s another foul by City. A bitey, physical game so far.

12 mins: Cuthbert has gone down here. She was caught by Demi Stokes in the middle of the pitch and appears to be in some distress. No free-kick was given for the tackle, something Emma Hayes is baffled by.

Cuthbert is back to her feet now. Looks like she will be able to carry on.

10 mins: Kelly drives forward for City as Taylor’s side assume control of the game once more. Shaw clips a ball into the box but Eriksson clears away.

Chelsea then settle down with another period of possession. City clearly the more dangerous in these early stages though.

8 mins: Chelsea begin to settle down as they knock the ball around in a bid to get a feel for the game. That was some first five minutes from Manchester City.

Millie Bright knocks Lauren Hemp to the ground inside the City half and the Sky Blues have themselves a free-kick.

The match has just settled down a little now after that frenetic opening.

Reiten sends a dangerous ball into the box which Kennedy gets to in front of Kerr. Better from Chelsea.

5 mins: Reiten hooks a ball towards Harder but the ball had just gone out of play before she made the pass.

Bronze and Reiten battle for the ball on the near touchline and it is the England international who gets the better of her.

Oh another chance for City! Gareth Taylor’s side have started this match superbly. Hemp drives into the area and finds Kelly but her shot is superbly blocked by Bright! It then falls to White but her shot is also blocked behind for a corner to City.

3 mins: CHANCE! Oh the first opportunity of the match falls the way of Manchester City. Kelly’s effort deflects perfectly into the path of Weir but she blazes over from eight yards out!

To all the iPods I’ve loved before – National