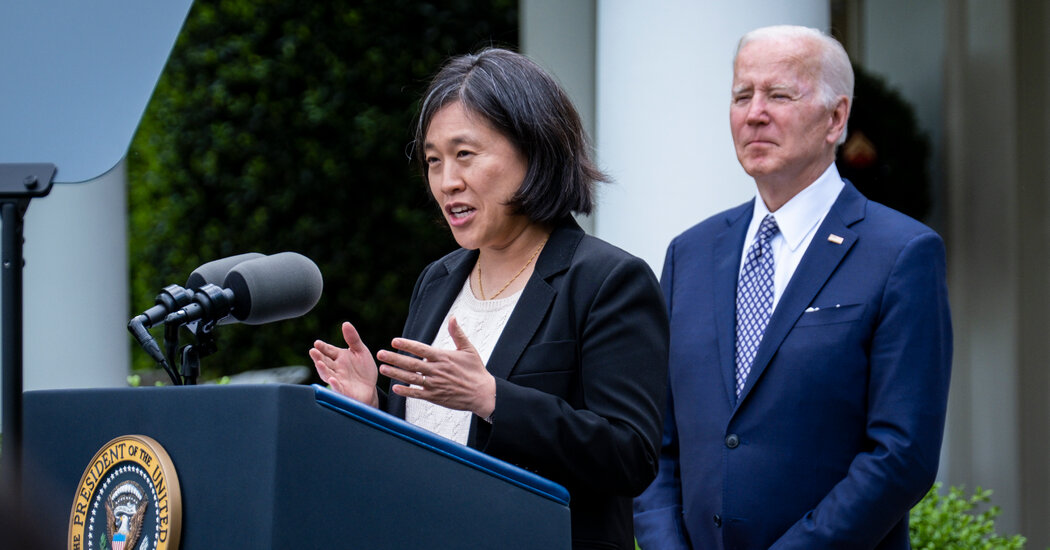 Lawmakers on Wednesday pressed President Biden’s top trade negotiator over the administration’s trade strategy toward China, including what, if anything, Mr. Biden planned to do about tariffs on Chinese goods that were imposed by his predecessor.

The Biden administration has been under pressure to ease some or all of the tariffs as a way to help deal with inflation, which is running at its fastest pace in 40 years. Katherine Tai, the U.S. trade representative, told lawmakers that a decision about tariffs and other actions toward China were “pending” with the president. But she also defended the importance of the levies, calling them “a significant piece of leverage” in relations with China and saying there was a limit to what could be done to address short-term challenges like inflation.

“A trade negotiator never walks away from leverage,” she said.

Mr. Biden has been weighing a decision to lift some of the levies that have been imposed on more than $360 billion of goods manufactured in China, including some consumer products. Proponents of the move say it could help ease inflation, since the levies are often passed on to American consumers who buy Chinese products.

But those who support the tariffs say easing them would remove a barrier aimed at protecting American industries against cheap Chinese products. They also point to the fact that China has not fulfilled all of the commitments it made to the United States as part of a 2020 trade deal established during the Trump administration, including an agreement to purchase an additional $200 billion worth of American soybeans, planes, energy and other products before the end of 2021.

When asked on Tuesday if he would speak with the Chinese leader Xi Jinping before making any decision on tariffs, Mr. Biden said he planned on having a conversation but noted that “we haven’t set a time yet.”

Ms. Tai told lawmakers on Wednesday that she viewed it as worthwhile to have conversations with the Chinese regarding their performance under the trade deal, given that “China does care about international credibility.” But she noted “that has not been enough to motivate China to make good on these purchase commitments in particular.”

“That is what is leading us to conclude that it is time to turn the page on the old playbook, she said. “We do need to enforce our rights with respect to China, and we need to defend the interest of our entire economy.”

Ms. Tai described China as having a state-driven economic model that enabled it to target and take over entire strategic industries. This approach had proved fundamentally incompatible with the more market-driven American economy, she said.

With respect to reducing the tariffs, she said, “we need to be keeping our eye on the ball on this bigger picture.”

She said it was the administration’s responsibility to help provide relief for “the economic challenges and the pinches” that Americans are experiencing. But she implied that maintaining tariffs would be a more effective longer-term tool in maintaining U.S. competitiveness against China.

“We can impact the competitiveness of our economy in the medium and the long term,” she said. “With respect to short term challenges, there is a limit to what we can do with respect to, especially, inflation.”

Streaming Is the New Frontier for Cultural Protectionism in Australia