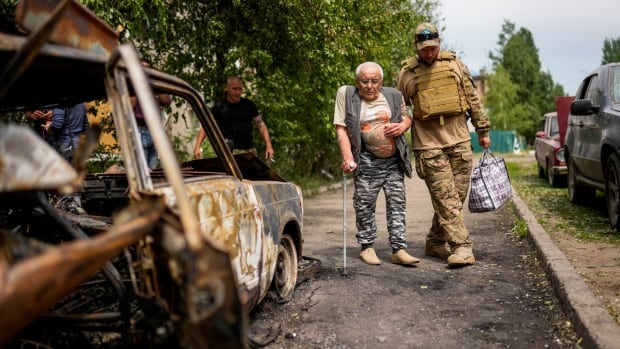 Updates from Day 97 of the invasion

Russian forces have taken around half of the city of Severodonetsk in Eastern Ukraine amid an intense series of artillery strikes and street battles, the mayor said on Tuesday.

Oleksandr Striuk said heavy fighting is ongoing and the artillery bombardments threaten the lives of the thousands of civilians still sheltering in the ruined city.

“Half of the city has been captured by the Russians and fierce street fighting is under way,” Striuk said. “The situation is very serious and the city is essentially being destroyed ruthlessly block by block.”

He added that “the Ukrainian military continues to resist this frenzied push and aggression by Russian forces.”

Striuk estimated that around 13,000 people remained in the city out of a pre-war population of around 100,000, but said it was impossible to keep track of civilian casualties amid round-the-clock shelling.

He said more than 1,500 people in the city who died of various causes have been buried since the war began in February. Evacuation efforts have been halted because of the danger of shelling.

He said that “civilians are dying from direct strikes, from fragmentation wounds and under the rubble of destroyed buildings, since most of the inhabitants are hiding in basements and shelters.”

Help impossible ‘under the hail of grenades’

The Norwegian Refugee Council on Tuesday said thousands of civilians caught in Severodonetsk are “in dire need of aid.” It is calling for humanitarian organizations to be allowed to access the city “with life-saving assistance and to enable safe evacuations of civilians who wish to leave.”

“We fear that up to 12,000 civilians remain caught in crossfire in the city, without sufficient access to water, food, medicine or electricity,” the council’s secretary general, Jan Egeland, said Tuesday.

He said the organization “cannot save lives under the hail of grenades.”

The Kremlin’s military campaign in Severodonetsk and Lysychansk on either side of the strategically important Siverskiy Donetsk River has become the latest focal point in Russia’s war as it seeks to capture the Donbas before more Western arms arrive to bolster Ukraine’s defence. Moscow-backed separatists already held territory in the region and have been fighting Ukrainian troops for eight years.

Military analysts described the fight for Severodonetsk as part of a race against time for the Kremlin. The city, which is 145 kilometres south of the Russian border, is in an area that is the last pocket of Ukrainian government control in the Luhansk region.

In his nightly video address, Ukrainian President Volodymyr Zelensky said the situation in the Donbas remains “extremely difficult” as Russia has put its army’s “maximum combat power” there.

At least three people were killed and six more wounded overnight in a Russian missile strike on the city of Sloviansk, west of Severodonetsk, Donetsk regional governor Pavlo Kyrylenko said in a Facebook post on Tuesday morning. A school was among several buildings damaged.

Video showed residential buildings with blown-out windows and destroyed balconies. Some of the local residents were seen clearing rubble inside their apartments.

In neighbouring Luhansk, two people were killed and four were wounded by shelling, Luhansk governor Serhiy Haidai said on Telegram on Tuesday. Haidai didn’t specify when or where the attack occurred.

European Union leaders came to terms late Monday on an agreement that will see most Russian oil banned from the EU.

European Union leaders have agreed to cut most Russian oil imports over the next six months after reaching a compromise with Hungary.

The sanctions against seaborne imports of Russian oil will be imposed with a phase-in period of six months for crude oil and eight months for refined products, a European Commission spokesperson said on Tuesday.

That timeline would kick in once the sanctions are formally adopted, with EU country ambassadors aiming to adopt them this week, after EU leaders agreed in principle to the sanctions at their summit in Brussels.

EU talks on Tuesday were set to focus on ways to end the trading bloc’s dependence on Russian energy, by diversifying supplies and speeding up the transition to renewable sources.

Matteo Villa, an analyst at the ISPI think-tank in Milan, Italy, said the latest EU sanctions are adding to inflationary pressures on oil and gas.

“We saw the Brent [crude] oil price go up from about $100 barrel [US] to almost $120 per barrel today. So clearly again, that’s an important thing to monitor, which is, we never want to do sanctions that hit much more us than hit Russia in this case,” Villa said.

The EU leaders will also focus on how to help Ukraine export millions of tonnes of grain blocked by the war.

The leaders will call on Russia to halt its attacks on transport infrastructure in Ukraine and lift its blockade of Black Sea ports so that food can be shipped out, notably from Odesa.

Ukraine says Russia has prevented the export of 22 million tons (19.9 million tonnes) of its grain through a blockade of Black Sea ports and is fuelling a global food crisis. The United Nations says African countries imported 44 per cent of their wheat from Russia and Ukraine between 2018 and 2020.

The EU leaders are likely to call for a speedier effort to set up “solidarity lanes” and to help Ukraine get its grain out through European land routes and sea ports.

Turkish President Recep Tayyip Erdogan’s office said late Monday that he has stressed the need to set up a corridor for Ukrainian agricultural products in a phone call with Ukraine’s president.

How pandemic inspired Clare doctor Ivanna McMahon to go for…