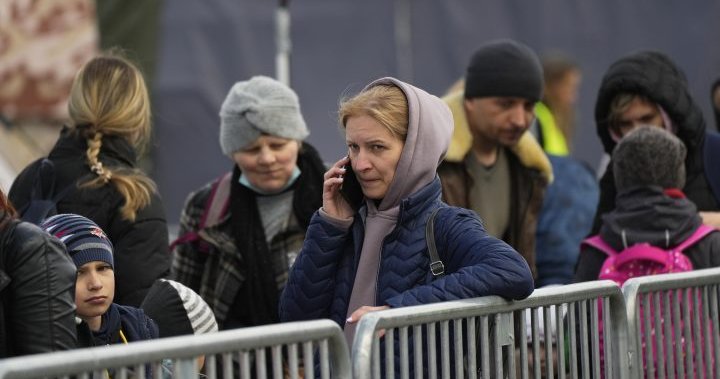 Many Ukrainians applying to come to Canada as Russia’s invasion of their country drags on are doing so as an “insurance policy” and a “backup plan,” the Canadian immigration minister has said.

In an interview Sunday with The West Block‘s guest host, Eric Sorensen, Sean Fraser said more than 100,000 applications have been approved from among the roughly 200,000-large inventory. But, he said it’s difficult to predict how many Ukrainians will actually come to Canada either on a temporary basis or to settle permanently.

Canada has opened its doors for war-ravaged Ukrainians. Does it have the capacity?

“We are finding … that a lot of people who are applying to the program are taking out a special authorization for emergency travel on a speculative basis, whether they have plans to travel in the near future or not,” Fraser told Sorensen.

Since the beginning of the year, more than 28,000 Ukrainians have arrived into the country, according to latest figures by the Immigration, Refugees and Citizenship Canada (IRCC).

1:58
Ukrainian mother of two arrives in Winnipeg: ‘I hope to find our peaceful home here’

Ukrainian mother of two arrives in Winnipeg: ‘I hope to find our peaceful home here’

In March, the Canadian government launched two special programs to assist Ukrainian nationals to come to Canada on a temporary or permanent basis.

Under the Canada-Ukraine Authorization for Emergency Travel program announced by IRCC, Ukrainians can stay in the country for up to three years. This temporary program has no limit on the number of people who are eligible to apply.

Ottawa chartering 3 flights for Ukrainian refugees over next month

Canada is also offering a special family reunification sponsorship program for permanent residency, which allows for a wider circle of family members to be resettled in Canada than is allowed under traditional strains.

This week, the government announced that three federal charter flights carrying Ukrainians will arrive in Canada over the next month. The flights will land in Winnipeg on May 23, Montreal on May 29 and Halifax on June 2.

This is on top of a new fund launched last month as part of a partnership between the Miles4Migrants charity, The Shapiro Foundation and Air Canada to cover the cost of travel for at least 10,000 Ukrainians.

Fraser said the combination of government-financed charters and generous donations to give Ukrainians flexible access to travel on commercial airlines will help bring thousands of people into Canada in the weeks and months ahead. However, he stopped short of giving a precise number of expected arrivals.

Ukrainians are reluctant to travel a long distance even within Europe because that could make getting home that much more difficult, said Fraser.

“People are really reticent to go too far from the western border of Ukraine because they have hope and optimism that returning home in the short term is going to be an opportunity for them,” he said.

The United Nations refugee agency (UNHCR) estimates more than six million people — mostly women and children — have already fled Ukraine since the start of the conflict on Feb. 24, with neighbouring countries in eastern Europe opening their doors to welcome the displaced civilians.