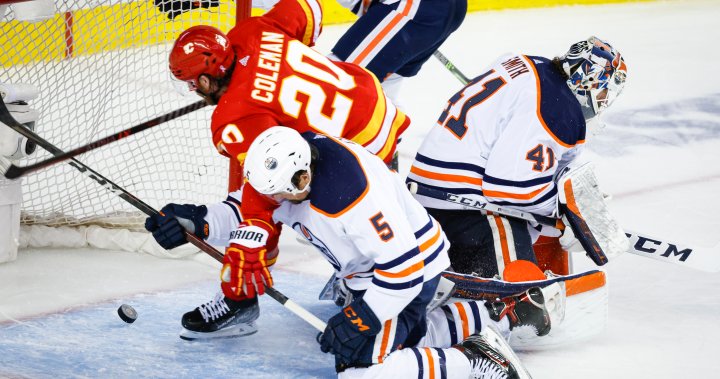 The Blake Coleman kick. Add it to the lore of the Battle of Alberta.

With 5:57 left in the third period of Game 5 between the Calgary Flames and Edmonton Oilers Thursday night, Coleman drove to the Oilers net.

Mikael Backlund’s shot went in off Coleman’s skate. The Flames celebrated a 5-4 lead before the officials used video review to rule Coleman had kicked the puck over the line.

The NHL defines a distinct kicking motion as when “an attacking player has deliberately propelled the puck with a kick of his foot or skate and the puck subsequently enters the net.”

It doesn’t matter if Coleman lifted his foot off the ice or not, he admitted to adjusting the position of his foot to propel into the net.

Calgary Flames eliminated from playoffs amid controversy over disallowed goal

Nonetheless, it was a close call at a crucial time of the season. I asked several people, on the condition of anonymity, what they thought of the play. Here are some replies broken down by group:

“You could win arguments calling it no goal and also calling it a goal. Get rid of the rule. It’s too open to interpretation.”

“I think Coleman knew what he was doing and the NHL got it right. I also think the NHL should amend rule wording from distinct kicking motion to add words like stopping, shoving, intentional redirecting, etc.”

“That’s a tough one. I thought it was a good goal.”

“Surprised it was overturned, but understand the explanation.”

“In my opinion, it’s no goal. But plays worse than that have been called a goal in the past. There’s such a grey area regarding kicks or redirects.”

“I did not see a distinct kicking motion. Compare it to other similar goals allowed this year, it’s a bad decision.”

“There’s no doubt in my mind he directed the his foot to the puck, but I was shocked it was overturned. That stands 95 per cent of the time.”

“I’m on a thread with eight colleagues. I think seven of us weighed in. I was only one who thought it shouldn’t have counted.”

“I think he kicked it, but that call could have gone either way. I really don’t think he extends his leg in that way if the puck isn’t there.”

“My initial thought was no way that’s a ‘distinct kicking motion.’ I thought for sure it would count. I think if you interpret by the book, he for sure made an effort to push it in, just not sure it should have been called off based on how it’s typically called.”

“I think it could’ve gone either way. There’s so much room for interpretation in some of these rules that it kind of always feels like the final call will be a surprise. Unfortunately I think it tainted the win a little bit. I’d be bummed if it was us on the other side of that call.”

“Initial angles, thought Coleman was braking so it was fine. But then I saw the reverse side replay and there was definitely an intent to direct the puck in.”

Perhaps this will lead to a clarification of the rule in the off season. The Oilers will be back at practice on Saturday to prepare for Colorado or St. Louis in the Western Conference Final.

Where Each Player Trending at Season Quarter Mark – NBC Chicago