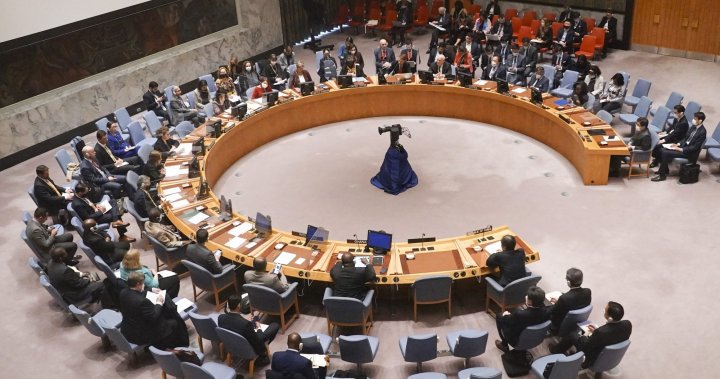 Canada’s foreign minister says she plans to raise reports of Chinese fighter jet pilots buzzing Canadian military planes over international waters with members of the United Nations Security Council — which China is a member of.

Melanie Joly told reporters in Toronto on Friday that the Canadian surveillance plane being targeted is flying on a UN mission and should be allowed to continue doing so without interference.

“Canada has every single right to be in that airspace, and that is why what China has been doing is extremely concerning,” she said.

“Canada is doing this surveillance work in the context of a UN mission, and China being a part of the UN Security Council, we expect them to respect our work.”

Global News first reported, citing multiple government sources, that Chinese jets have repeatedly flown so close to a Canadian surveillance plane in the Asia-Pacific region that Canadian pilots could make eye contact with Chinese pilots, who have sometimes shown their middle fingers. The reports were later confirmed by the Department of National Defence.

The Canadian CP-140 Aurora plane is currently taking part in Operation Neon, part of UN efforts to enforce sanctions against North Korea and prevent the rogue nation’s development of weapons of mass destruction. The plane is flown frequently by multiple, rotating crews.

China’s foreign ministry has yet to comment on the allegations, despite repeated requests for comment from Global News.

It’s not immediately clear if the UN Security Council could hold China accountable. As a permanent member, China has veto power, allowing it to discard any motion that seeks to dissuade Beijing — just like how Russia, another permanent member, has vetoed motions seeking to stop its invasion of Ukraine.

Canada does not have a seat on the council, having lost its latest bid to join the enforceable arm of the General Assembly in 2020. The last time Canada held a Security Council seat was in 2000.

A spokesperson for Norway’s UN mission, which chairs the Security Council Sanctions Committee on North Korea, told Global News on Thursday it could not speak to the Chinese fighter jet reports, but added it takes “any possible violations of the sanctions regime seriously.”

Joly said Thursday that she also plans to raise the reports with her Chinese counterpart. Prime Minister Justin Trudeau said the same when asked about the allegations Thursday.

Ottawa has already sent multiple diplomatic reprimands, according to sources, calling the Chinese pilots’ conduct “unsafe and unprofessional.” China is believed to have not responded to the reprimands, and the incidents have continued, with approximately 60 intercepts with Chinese fighter jets since Christmas.