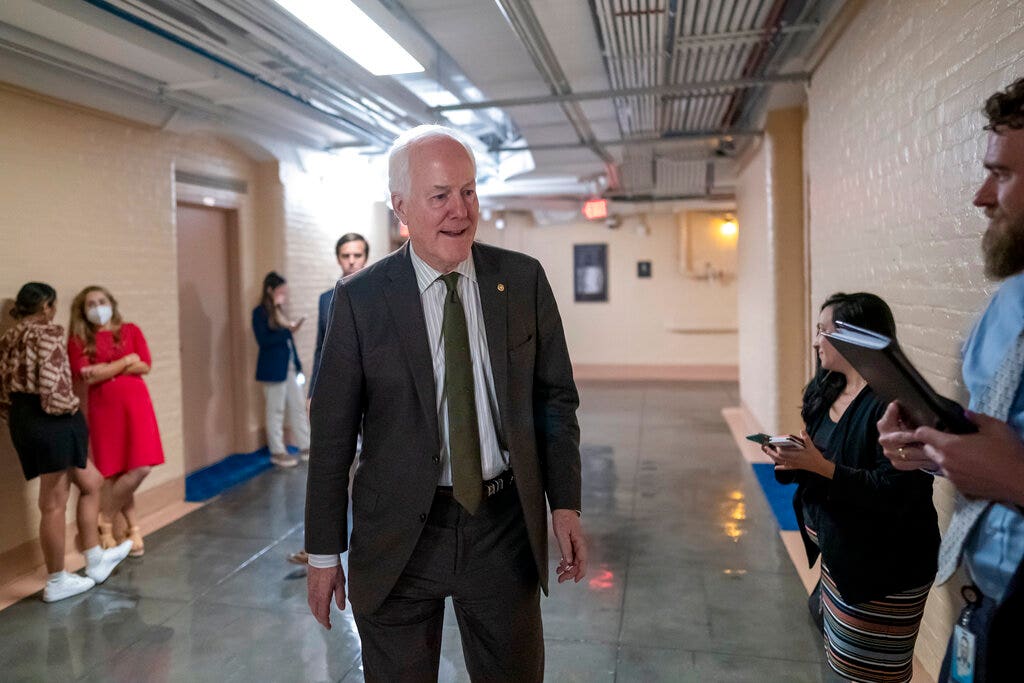 Sen. John Cornyn’s, R-Texas, office on Wednesday denied that a bipartisan immigration bill is in the works after comments he made on the Senate floor that his staff say were a joke, but that sparked uproar from conservatives.

Cornyn, who frequently attempts to find bipartisan paths for legislation on a range of issues that includes immigration, was on the Senate floor Tuesday evening as the chamber advanced bipartisan gun legislation that he had helped shepherd.

Cornyn’s reported comments drew swift backlash from the right, many of whom were already angered by his support for the gun legislation which advanced 64-34 in the split chamber.

Cornyn has previously backed bipartisan immigration efforts, including a border security bill, which he introduced with Sen. Sinema to combat the migrant crisis at the southern border. He has also backed a pathway to citizenship for illegal immigrants who came to the country as children and who were eligible for the Deferred Action for Childhood Arrivals (DACA) program.

Ohio Senate candidate J.D. Vance said on Fox News’ “Ingraham Angle” that it would be “catastrophic” for the Republican Party to “advance amnesty.”

“The worst thing that we can do as a party right now in the midst of a historic immigration crisis is to advance amnesty. And if we do it, we will get crushed and we will deserve it.”

House Republican Leader Kevin McCarthy, meanwhile, appeared to distance himself from any such efforts: “Amnesty is a non starter with me and won’t be taken up by a House Republican majority,” he told Axios.

Groups calling for lower immigration groups also came out in opposition of any such moves:

“What a weird way for @JohnCornyn to announce that he never wants to become @SenateGOP Majority Leader,” the Federation for American Immigration Reform (FAIR) tweeted, in reference to reports that Cornyn could succeed Leader Mitch McConnell.

But a spokesperson for Cornyn denied that an immigration bill was on the table.

“No, the tweet is not accurate,” spokesperson Drew Brandewie told Fox News Digital on Wednesday. “It was a joke. There’s no immigration bill.”

It is the latest sign that bipartisan efforts on broad immigration reform measures that included pathways to citizenship for illegal immigrants, once supported by a number of Republican lawmakers in both chambers, are struggling to gain any traction amid a historic border crisis that saw more than 239,000 migrant encounters in May alone.

After the Biden administration introduced a broad immigration framework at the beginning of last year that included amnesty for millions of illegal immigrants, even Republicans who had previously been open to a reform bill dismissed it as a non-starter.

Democrats later sought to include a number of amnesty proposals in its budget reconciliation framework, but they were found to be inappropriate for inclusion by the Senate parliamentarian — and the reconciliation bill stalled in general after Sen. Joe Manchin, D-W.Va., said he would not support it.

Adam Shaw is a politics reporter for Fox News Digital, with a focus on immigration. He can be reached at [email protected] or on Twitter: @AdamShawNY

“The final defense is us and our rifles”: Oath Keepers leaders talked of…