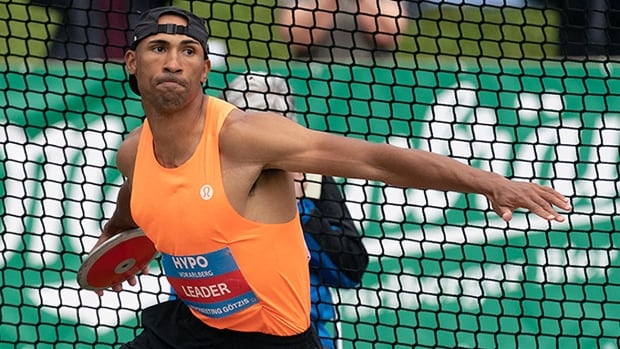 Damian Warner is the latest Canadian Olympian to scratch this week’s track and field nationals from their competition schedule due to injury.

The 2020 Olympic decathlon champion has withdrawn from the Langley, B.C., event with a sore knee that has hampered the London, Ont., native “off and on all year,” according to his coach, Gar Leyshon.

“We are not taking any chances,” Leyshon told CBC Sports on Monday afternoon. “We are just being cautious with [world championships less than] a month away. Worlds is a go.”

Warner was registered for a few individual events in Langley but not the decathlon.

At less than full health, the 32-year-old Warner claimed a sixth consecutive decathlon title in late May at the Hypo Meeting in Götzis, Austria.

In March, he became a first-time world athletics indoor champion after beating Simon Ehammer of Switzerland by 126 points in the seven-event heptathlon in Belgrade, Serbia to raise his Canadian record to 6,489 points.

Middle-distance runner Gabriela DeBues-Stafford of Toronto was forced to shut down her season last week because of a stress reaction in her sacrum, located below the lumbar spine and above the tailbone.

Distance runner Justyn Knight (Achilles) and hurdler Sage Watson (back) will also not compete this week.

Knight, 25, has been hampered by injury since last summer.

“It’s been getting better,” the Toronto native told CBC Sports, “but not where [my coaches and I] want it to be so I won’t be going to nationals.”

Knight finished seventh in his Olympic debut in Tokyo, stopping the clock in 13:04.38 in the men’s 5,000, more than 22 seconds faster than his 10th-place finish at the 2019 world championships.

Watson said she injured her back about six weeks before the 2020 Olympics and announced last week on Facebook she is stepping away from competition to “fully recover and give my body the break it needs and deserves.”

The 28-year-old from Seven Persons, Alta., was 13th in the women’s Olympic 400 hurdles last year.