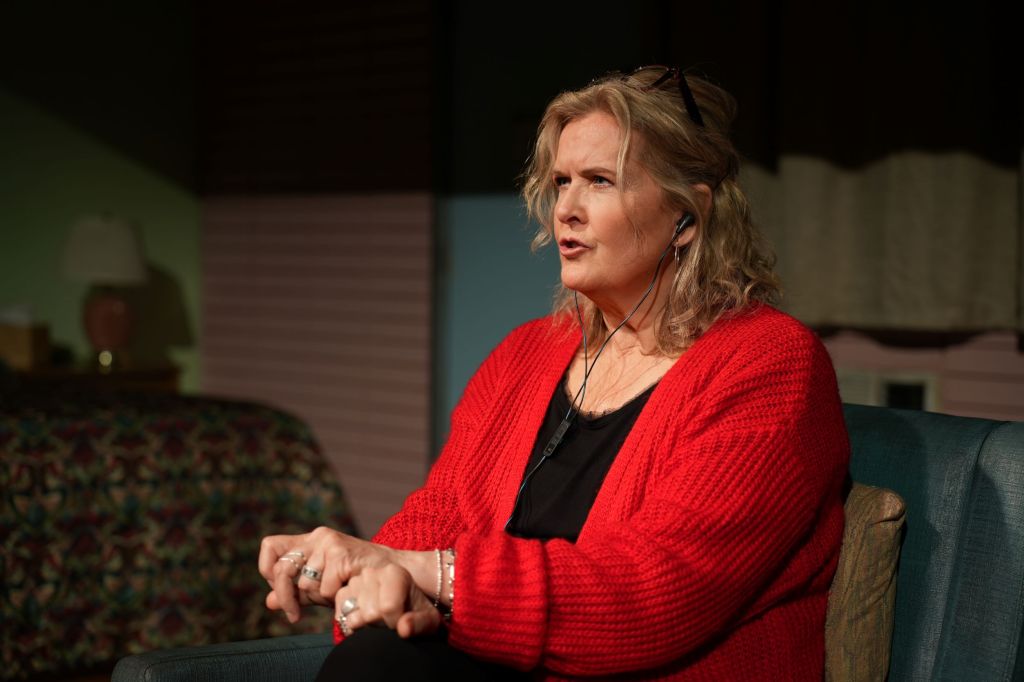 “Dana H.” is the kind of play you may never forget.

Reliving parts of her trauma, in Les Water’s bone-chilling production at Berkeley Rep, has the power to make your heart pound and your stomach churn, even as you hang on every word. Even a veteran theatergoer, accustomed to the raw and the visceral, might find themselves taut with silent rapture, listening so hard you’re almost holding your breath.

The fact that Hnath (“A Doll’s House, Part 2,” “The Christians”) is tapping into the real tragedy that befell his own mother only heightens the sense of horror. The minimalism of the staging, a woman sitting in a shabby motel room giving an interview, her reveries punctuated by an unsettling sound design (Mikhail Fiksel), certainly deepens the mystery and anomie.

Hnath keeps us disoriented, sort of like Dana. This is a solo show but Baker does not speak, instead hypnotically lip-syncing to tapes of Dana’s real recorded voice, her sighs and her stammers, as she tells her terrible story. It’s a symphonic performance from Baker (who understudied the role on Broadway) that sucks us in despite its gruesome nature.

Dana was a chaplain, a healer with overflowing empathy for lost souls, in the psychiatric ward of a Florida hospital in 1997. They called her in when the nurses and doctors were in over their heads. She always came through. Alas, her valiant attempts to minister to Jim, a hardened ex-con with a history of violence, lead him to become far too attached to her.

Eventually, overwhelmed by rage and amped up on meth, he drags her down with him into his bloody world of rape and murder in the name of racial purity.

At first, she tries to escape, to seek help from the police or the medical establishment, but no one is interested in her plight, particularly if they know about the white supremacist network Jim is connected to. The more she tries to run, the tighter he traps her.

To endure the torment, she disassociates from her body, from her senses. Time blurs. Facts slip out of grasp.

Waters, a longtime collaborator of Hnath’s, captures that limbo of fear and disorientation in the haunting tableaux of a no-nonsense housekeeper cleaning up a bloody bed without batting an eye.

The play was nominated for three Tony Awards, including best director. Waters, a Berkeley Rep alum with a genius for cultivating sharply-observed details that thrum with meaning, more than deserves that honor. The understated nature of this production is breathtaking.

Held hostage, battered and alone, Dana loses track of where she is and who she is, surviving only on the dim hope that one day she might find a way out of the nightmare.

The fact that Dana somehow finds a way to transcend her ordeal in no way blunts the shattering power of her story. She finds a new calling in hospice, using her insights into mortality to help the dying let go of life.

Hnath, for his part, leans into the fluidity of truth, the way someone so brutalized may not be able to accurately recount their suffering, the way memories bleed together in messy snapshots, and the way we all are unreliable narrators of our own lives.

Try as you might you can never fully comprehend what happened to Dana or why. Like so much of human existence, there’s something profoundly elusive about this narrative. That sense of existential mystery pervades “Dana H.” and makes it all the more haunting.

It takes a lot to shock an audience today, in a world wracked by school shootings, plagues and attempted coups, but there’s no doubt you’ll leave the theater feeling shaken and unmoored by having heard Dana’s voice.

How Congress May Make It Easier to Set Money Aside for…