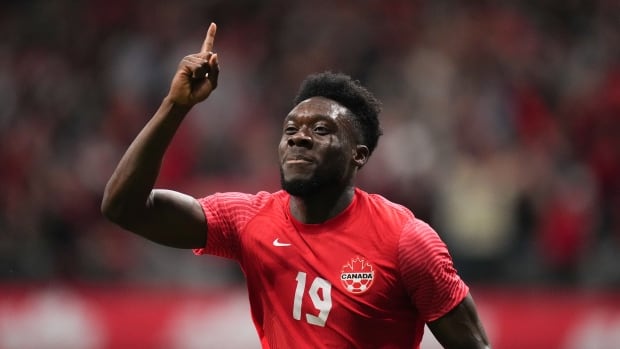 The Canadian men’s soccer team put a dramatic week behind them with a decisive 4-0 win over Curacao to open their CONCACAF Nations League campaign on Thursday.

The victory followed a week that saw the Canadian players miss two training sessions and refuse to play a friendly game against Panama in Vancouver due to an ongoing contract dispute.

Canada, ranked 38th in the world, didn’t appear to have much rust to shake off on Thursday, however, pressuring No. 79 Curacao just two minutes into the game.

Alphonso Davies scored twice, including on a first-half penalty kick, while Steven Vitoria and Lucas Cavallini each added a goal.

It was a quiet night for Canadian goalkeeper Milan Borjan, who did not face a single on-target shot. Eloy Room made five saves for Curacao.

Canada continues its Nations League play on Monday when they take on No. 82 Honduras in San Pedro Sula.

The Canadians sealed the score at 4-0 in the 86th minute.

Sam Adekugbe dished a pass in to Cavallini inside the six-yard box and the ball deflected off the Vancouver Whitecaps’ striker as he toppled to the turf.

Cavallini came off the bench in the 76th minute for Tajon Buchanan.

Two shirtless protesters with “Save Old Growth” messages written on their bodies briefly affixed themselves to the Curacao goalposts midway through the second half. They were removed by security and led off the field by police.

Canada exploded out of the brief pause with another goal off a give-and-go.

Davies sent the ball to substitute Richie Laryea deep in the penalty area and Laryea quickly put it back on Davies’ foot. Davies tapped it in from the top of the six-yard box in the 74th minute for his second goal of the game.

The crowd of 17,216 rose to give Davies a standing ovation when he was replaced by Ike Ugbo in the 76th minute.

The Canadians controlled much of the action through the first half, hemming Curacao into their own end for extended periods and outshooting the visitors 15-2, and 5-0 in shots on target.

Davies opened the scoring in the 27th minute after being hauled down inside the penalty area by Jurien Gaari.

The 21-year-old Canadian star stepped up to take the kick, composing himself with a deep breath before sending a low rolling shot into the bottom-left corner of the net. He pumped his fist and blew a kiss to the crowd before being mobbed by his teammates in celebration.

Davies was playing his first game at B.C. Place since October 2018, when he was a member of the Vancouver Whitecaps. The ‘Caps transferred the speedy midfielder to German soccer giant Bayern Munich in a record-breaking $22-million deal US.

Davies helped set up Canada’s second goal of the night on Thursday with a corner late in the first half.

His ball in was stopped by Room, but the Curacao ‘keeper couldn’t hold on and Jonathan David collected the rebound. He sent a ball to Vitoria who headed it in to give Canada a 2-0 lead.

Thursday’s game marked the first Canada has played on home soil since clinching a World Cup berth with a win over Jamaica in Toronto on March 27. It’s the first time Canada has qualified for the tournament since 1986.

The squad was scheduled to play a friendly warm-up match against Panama in Vancouver on Sunday but the game was called off at the last minute when players refused to take the field due to heated contract talks with Canada Soccer, the sport’s national governing body.

The players issued a statement saying they want more transparency from the organization, an equitable compensation structure for both the men’s and women’s national teams, and World Cup compensation that includes 40 per cent of prize money and a “comprehensive friends and family package” for the 2022 tournament in Qatar.

Canada Soccer has yet to reach a new deal with the athletes, but players returned to training on Monday, and on Wednesday the organization’s interim general secretary, Earl Cochrane, said negotiations have been positive.

The Canadians topped the final round of CONCACAF World Cup qualifying with an 8-2-4 record — and went 14-2-4 through three rounds of qualifying. They finished the qualifying round with a 1-0 loss in Panama on March 30.

Curacao opened its CONCACAF Nations League campaign with a 2-1 win over Honduras on Monday.

The group stage of the 2022-23 tournament will serve as the qualifier for the 2023 Gold Cup. Group play will continue in March 2023 and the Nations League finals scheduled for June 2023.

How to have better sex with a small penis