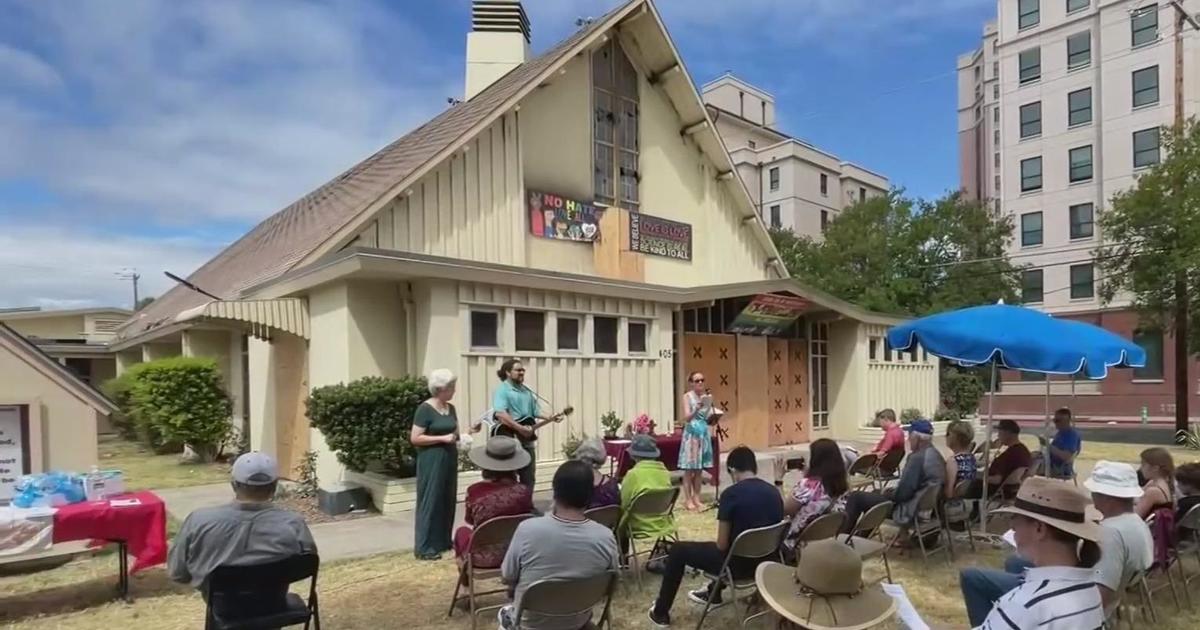 On Wednesday, the news broke: St. Paul’s United Methodist Church in San Jose was on fire, a blaze authorities said was deliberately set by an arsonist.

“I got onto Google and said, ‘uh oh.’  That’s how I found out,” said church member Phil Braverman.  “And then when I saw it on the news that night, that was not good.”

The entire front of the church, near the altar, has been gutted, including its pipe organ. They’re not sure how much of the sanctuary can be saved, but fortunately, for this congregation, the church really isn’t a building at all.

Just four days after the blaze, Sunday services went on as usual, only this time it was on the lawn out front. On a makeshift altar, the cross and candles were donated, and members held lyrics printed from the one remaining song book.

Church attendance was recorded on a log sheet scorched by the blaze.

“Yeah, first of all, I’m delighted to be here. This is kind of a special time,” church board member David Lowe told the congregation.

Lowe said he was pleasantly surprised they could pull off the last-minute service so quickly.

“Yeah, I was kind of thinking we would be scratching our head for a month,” he told KPIX 5.  “But no. People stood up and said, no, we can do this and then they did it. So, I was very happy about that.”

Ten-year-old Isaac Tabor was impressed by the church’s ability to come together under such difficult circumstances.

“One word: resilient,” Isaac said.  “It means, like, it refuses to go down without a fight. And I like that about this church.”

The church is no stranger to difficulty or crime.  Pastor Helen Kung said its stained glass has been broken, its cross stolen and it’s been a frequent target for vandalism.

“We deal with this all the time and our members are aware that we have this kind of trauma all the time,” Kung said.  “We are resilient, no matter what.”

The suspect accused of setting the fire is a homeless man. Kung said she holds no ill will toward the man who has been arrested and facing an arson charge.

“He is dealing with his demon–he doesn’t know,” she said.  “He doesn’t know us. We don’t know him. So, he’s lashing out for whatever reason that is. Our response is love.”

The pastor said other churches in the area have offered their help, including the donation of a pipe organ to replace the one destroyed in the fire.

Fortunately, the church has space at the back of the building that only suffered smoke damage. Once it’s cleaned up, they will be able to carry on.

St. Paul’s wanted to hold their first service right out front, as a way to show the community that they are still there, and they’re going to be ok.

Study ranks the California housing markets that are cooling the most

Abstaining from alcohol might RAISE the risk of dementia,…

Starling Marte takes step toward recovery ahead of Mets’…