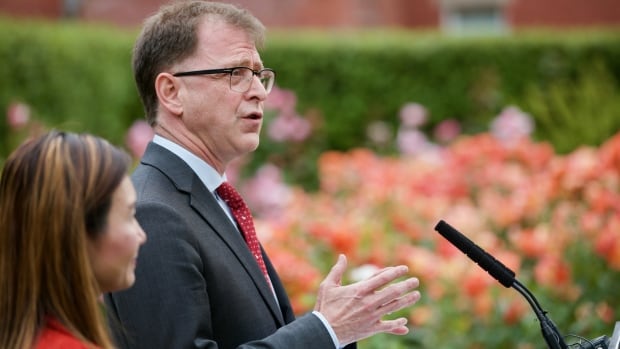 The province has announced millions of dollars in funding for a new medical school at Simon Fraser University’s (SFU) Surrey campus and has named its dean.

Premier David Eby said $4.9 million in funding would be provided to support accreditation, planning, engagement, and staffing. Earlier this year, the province provided $1.5 million to support the development of a business case.

Dr. Roger Strasser has been appointed interim dean. He was the founding dean and CEO of the Northern Ontario School of Medicine.

According to SFU, Strasser is one of the “world’s foremost authorities in rural, socially accountable medical education.”

“With this new medical school, the Province of B.C. is demonstrating its commitment to a strong public health-care system that meets the needs of its diverse and growing population,” Strasser said in a news release.

“I am extremely excited to have this opportunity to join SFU to help deliver on that vision.”

Once opened, the school will be the second full medical school in the province, alongside the University of British Columbia’s Faculty of Medicine, which has campuses throughout the province.

The NDP first announced the SFU medical school during the October 2020 election campaign. The first class was expected to begin in 2023, but that has now been pushed back to 2026.

The Ministry of Finance projected a $5-billion budget surplus last week, of which Eby’s recent promises have amounted to more than  $1 billion.

The Opposition Liberals slammed the government for delaying a promise it made in 2020 when one million people in B.C. do not have a family doctor.

“The NDP promised to create a second medical school back in October 2020 and said we could expect graduates as soon as the 2023 school year,” said Liberal health critic Shirley Bond in a statement. “Today’s announcement that B.C. won’t see new doctors graduate from SFU until 2030 is devastating news for those expecting swift action from their government in the middle of a health-care crisis.”

The update comes a day after the premier unveiled plans to license more internationally-trained doctors to work in the province as a means to deal with an ongoing shortage of family doctors, specialists and emergency room staff.

Eby said the province will be increasing the number of internationally-educated family doctors that can become licensed to work in B.C., from 32 spots to 96, by March 2024.

Dr. Ramneek Dosanjh, the president of Doctors of B.C., described the plan as “meaningful” and substantial.

“This is a component of a much larger action plan to address the challenges with the family doctor shortages and the lack of patient access,” she told B.C. Today host Michelle Eliot.

An estimated one million British Columbians do not have a family physician. A poll from the Angus Reid Institute released in September suggests 59 per cent of B.C. residents face challenges accessing a doctor, higher than the national average of 50 per cent.

Patients in B.C. have reported long wait times for treatments, including cancer testing and surgeries such as hip replacements and difficulties accessing vital drugs and devices to treat diabetes.

Dosanjh trained in the U.S., and said the process to become licensed in Canada was longer than necessary, and any move to streamline the process is a step in the right direction.

Dr. Honieh Barzegari, who works for a Vancouver-based company developing solutions for skin cancer, said that she gave up on the licensing process when she moved to B.C. from Iran about seven years ago.

“The pathway for foreign-trained medical doctors to be able to get the licence and practice here is a very cumbersome path.”

At the end of October, the province announced it would be launching a new payment model for family doctors in 2023, responding to complaints from physicians that the current fee-for-service system does not properly compensate them for their work.