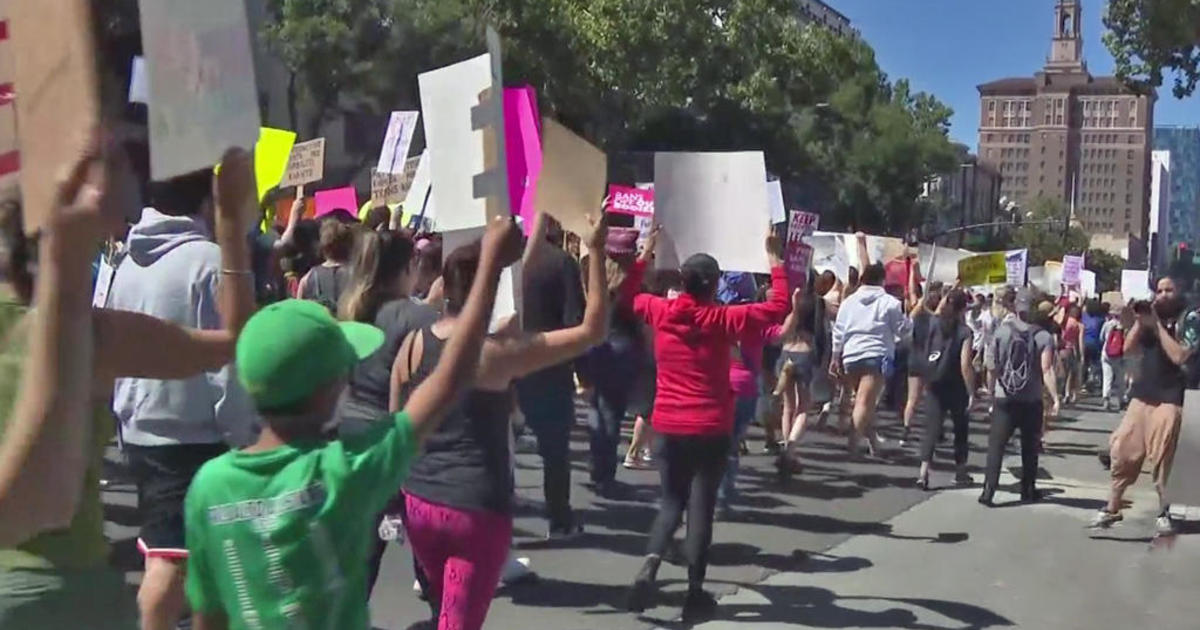 SAN JOSE (KPIX) — On the day following the Supreme Court ruling that overturned Roe v. Wade, thousands of people arrived at San Jose City Hall for a protest march. The march down Santa Clara Street didn’t have the usual police escort and, whether they had permission or not to be there, those who showed up were in no mood to ask for it.

“We’re not going to let the Supreme Court tell us what to do with our bodies and our futures,” said Sabina Wildman with the Party for Socialism and Liberation, which co-organized the demonstration. “This is exactly how women have won rights before — by being in the streets and organizing in the 60s and early 70s.  So, we have to do it again.”

As the crowd poured into the street heading for Cesar Chavez Plaza, the anger was obvious.  Women who marched in the 1970s were trying to establish their rights.  Now, women are reacting to having their rights taken away.

“When we fought — and we fought hard — and we had those rights, we assumed that was going to be forever,” said Sherry Durkee, who marched for abortion rights in Washington D.C. in 1972.  “It was accepted by the Supreme Court and the Constitution of the United States.  To have that threatened now and other things being threatened now because of this caving in — it’s very, very scary. It is scary to Democracy. This is not democracy!”

“We knew this was going to happen.  I’m not surprised but I’m incredibly, incredibly sad for our people, for our future,” said San Jose resident Charlene Payne. “But we’re not going to let this just stand.”

At the rally, David Buesch said he thinks the way the newest Supreme Court justices swept aside 50 years of precedent will damage people’s basic respect for the law.

Some demonstrators were calling for a new federal abortion-rights law. They said the argument will never end as long as the issue is left up to the whim of the Supreme Court.

Haley Govorko from San Jose has been to one protest after another and is feeling pretty cynical about where the country is heading.  On Saturday she was holding a sign that read, “America is embarrassing.”

“The fact that the earth is on fire and that doesn’t bring us together and then all these other things — it’s just, I don’t know,” she said, shaking her head.  “I don’t know what it’s going to take but it feels like we might be close to a boiling point.”

Jackson Percy of San Leandro, age 12, summed it up this way.

“This is going to be in history books at some point,” he said.  “Like, this is changing history.  This won’t be forgotten.”

Mark Whitaker on the history of the Black power movement