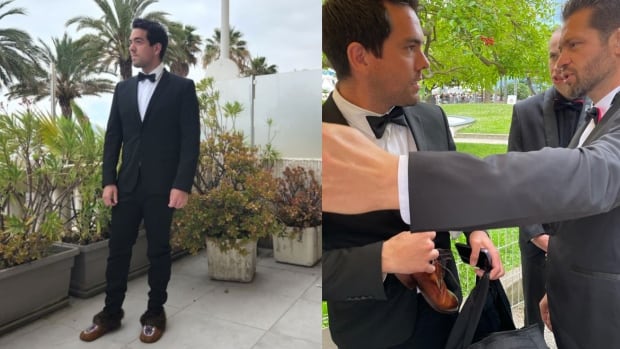 A Dene filmmaker says he was turned away from the red carpet at the Cannes Film Festival because he was wearing moccasins.

Kelvin Redvers, who is from the Northwest Territories and works in B.C., says he hopes the incident is a learning moment for event organizers and it helps expand the festival’s idea of what counts as formal wear.

Redvers travelled to France as part of a delegation of six Indigenous filmmakers with support from Telefilm, the Indigenous Screen Office, and Capilano University’s FILMBA program.

He was invited to a red carpet screening of Valeria Bruni Tedeschi’s Les Amandiers. Cannes has strict rules around formal wear on the red carpet — black tie for men, evening gowns for women — but there are accommodations for traditional formal wear, such as Scottish kilts or Indian saris.

Redvers thought his moccasins paired with a tux, would qualify.

“For me, these moccasins are ceremonial, they’re formal, basically,” he said on CBC’s On The Coast Friday. “So I’m going to wear a great tux, I’m going to look super good but I’m gonna insert just a little bit of Indigeneity.”

Redvers had the moccasins in a bag as he went through the first security checkpoint, he said. He slipped them on and was then flagged by security at a second checkpoint, who told him he couldn’t wear moccasins.

A French-speaking member of Redvers’ cohort tried to discuss the situation with security. Eventually, Redvers said, a security guard had had enough.

“I guess he hit his limit and rather aggressively, simply put his foot down, to ‘leave, leave, leave now, leave,'” he said.

Redvers was eventually allowed back on the red carpet after swapping footwear, but he said the incident left him and his contingent upset.

“I really was quite shocked at this aggressive treatment for what was such a thing of excitement for me,” he said.

Redvers, the Indigenous Screen Office and Telefilm met with festival organizers, who offered an apology. He was then invited to wear moccasins to a red carpet screening of Canadian director David Cronenberg’s new film Crimes of the Future on Monday. He said he met some resistance upon arrival, but was eventually waved through.

Redvers says he hopes his red carpet experience has started a conversation among Cannes officials about the nuance of traditional formal wear.

Part of his run-in, he said, could be attributed to the fact that so few Indigenous people have attended Cannes.

“I guess they just hadn’t had exposure to something like this pair of beaded moccasins with moose hide,” he said.

He says he hopes that is changing, and adds that Cannes is more than red carpets, it is also a time to network. He says all six Indigenous filmmakers made industry contacts that they are hopeful will lead to funding and distribution deals for their projects.

“All of us … are, we believe, so close to having our films premiere and just making a presence at festivals like this because we’ve all got great projects going on and there’s a lot of great talent coming up.”

CBC has reached out to the Cannes Film Festival for comment.

House Republicans gear up to investigate NIH about COVID-19…