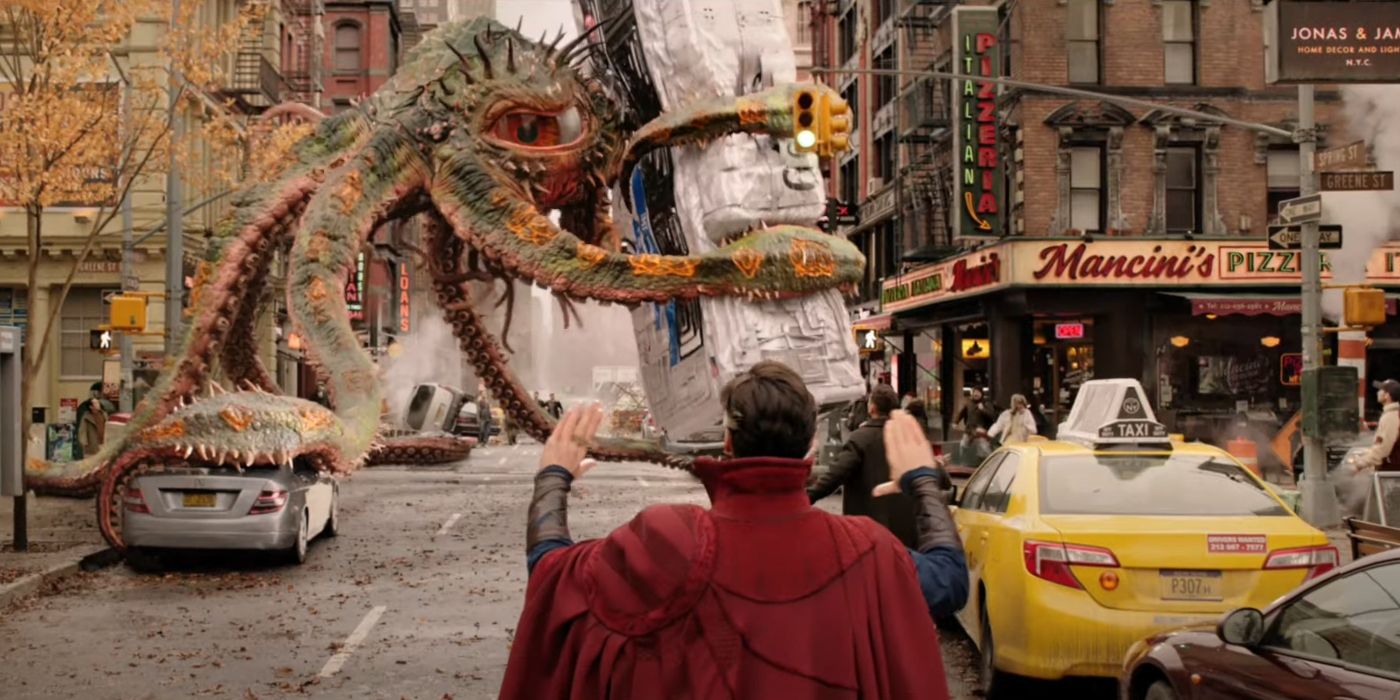 Superhero fans can now watch the epic fight between Gargantos, Doctor Strange and Wong from Doctor in the Multiverse of Madness online for free.

The epic first battle in Doctor Strange in the Multiverse of Madness is now available to watch for free online.

The fight between Doctor Strange, Sorcerer Supreme Wong and the interdimensional being, Gargantos, was uploaded in its entirety on Vudu’s official YouTube channel. The clip appears intended to hype the movie, which is now available on digital release and to stream on Disney+.

A special home video release of Doctor Strange in the Multiverse of Madness will arrive at Walmart later this summer. Along with new artwork of the cast on the cover, the Blu-ray will feature several behind-the-scenes extras. These include “Method to the Madness,” where the crew members discuss their love of director Sam Raimi, and “Introducing America Chavez,” a short film that details the character’s comic book origins.

The 28th feature film in the Marvel Cinematic Universe, Doctor Strange in the Multiverse of Madness premiered in theaters on May 6, and it is on track to surpass Captain America: Civil War‘s domestic box office of $408 million. The movie sees the titular master of the mystic arts trying to protect Chavez, who can travel the multiverse at will, from the hero-turned-villain Wanda Maximoff/the Scarlet Witch. Wanda wishes to steal the young woman’s powers in order to reunite with her children, Tommy and Billy, and she is willing to attack and brutally murder anyone who gets in her way.

Doctor Strange in the Multiverse of Madness is the MCU’s first foray into the horror genre. Beyond Gargantos’ Lovecraftian aesthetic, the film pays homage to horror classics like Stanley Kubrick’s The Shining and Gore Verbinski’s The Ring, and the movie ends with a frighteningly hilarious battle between the Scarlet Witch and an undead version of Doctor Strange.

With the film now available to watch digitally and its home video release fast approaching, promotional material is once again being dropped for Doctor Strange in the Multiverse of Madness to recapture the attention and interest of superhero fans and consumers. A brief gag reel was released alongside the clip of Doctor Strange and Wong fighting Gargantos. It features Elizabeth Olsen and Xochitl Gomez, who play Wanda and America, respectively, trying to avoid stray leaves being blown in their faces, and Benedict Cumberbatch showing off his dance skills while dressed in full Zombie Strange makeup. There are also multiple shots of Olsen struggling to stand up in her Scarlet Witch costume.