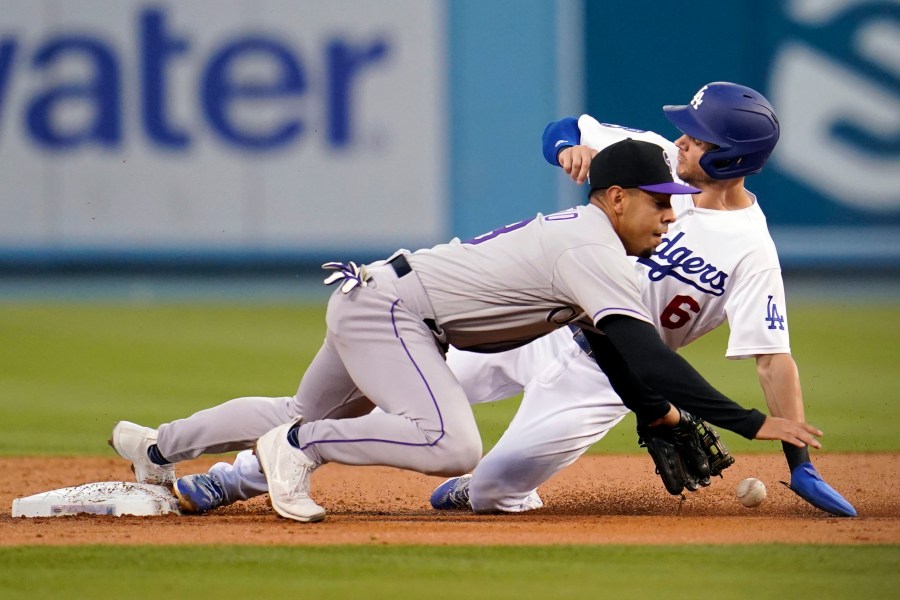 LOS ANGELES (AP) — Mookie Betts, Freddie Freeman and the Los Angeles Dodgers became the first National League team in more than a century to win 110 regular-season games, taking advantage of 10 walks to rally past the Colorado Rockies 6-4 on Saturday night.

Cody Bellinger had three hits and two RBIs for the NL West champions, who are 110-48 after overcoming a three-run deficit with the help of six free passes in the seventh inning.

Joey Gallo had a go-ahead sacrifice fly in the eighth for the Dodgers, and Bellinger added an RBI single to make it 6-4. Bellinger also tied the score with a sac fly in the seventh.

Los Angeles won for the sixth time in seven games and has already clinched home-field advantage through the World Series. The Dodgers have four regular-season games remaining, not enough to catch the 2001 Mariners and 1906 Chicago Cubs (116-36) for the most wins in major league history.

“That’s a round number (of wins); it’s a big number,” Dodgers manager Dave Roberts said. “To celebrate that is a great thing and hopefully we are having this conversation tomorrow with 111. I think our guys are in the moment appreciating it, but we have our eye on some bigger things, too.”

Ryan McMahon and Randal Grichuk homered for the last-place Rockies, who lost their seventh consecutive game and 11th in the past 12.

With the Rockies leading 4-1 in the seventh, Colorado right-handers Dinelson Lamet and Chad Smith each walked three batters in the inning. The first five Dodgers batters all walked, with free passes to Gallo and Austin Barnes forcing home runs to cut the deficit to 4-3.

“That was not a major league inning, I’ll put it that way,” Colorado manager Bud Black said. “It was ugly, no doubt about it. And you know, we gifted the Dodgers that seventh inning. Yeah, obviously they have a really good record, but tonight, you look at it, you’ve got to feel like you beat yourself.”

Bellinger’s sacrifice fly tied the score. It came on the 31st pitch of the inning, but the first one to be put in play.

“When those kind of situations happen, you become even more patient,” Freeman said. “That’s just kind of our M.O. We’re going to work pitchers, we’re going to make you throw a lot of pitches. You would think you would get one hit in a situation like that, but we did what we needed to do to tie the game.”

The Dodgers loaded the bases with none out in the eighth on singles by Trea Turner and Freeman, and a walk to Trayce Thompson. Gallo’s sacrifice fly made it 5-4, and Bellinger added an RBI single.

The Dodgers took a 1-0 lead in the third when Betts scored on a one-out single by Freeman, the major league batting leader. Betts led off the inning with a double, making him just the second Dodgers player with at least 35 home runs and 40 doubles in a season after Babe Herman in 1930.

Dodgers: OF Chris Taylor was a late scratch from the lineup with neck tightness. … Justin Turner, who has not played since Tuesday because of a bruised shin, also was scratched but is expected to return Sunday.

Roy Keane hits out at ‘disrespectful’ Brazil AGAIN.. and tells…