Downton gets more of the same, plus Hollywood 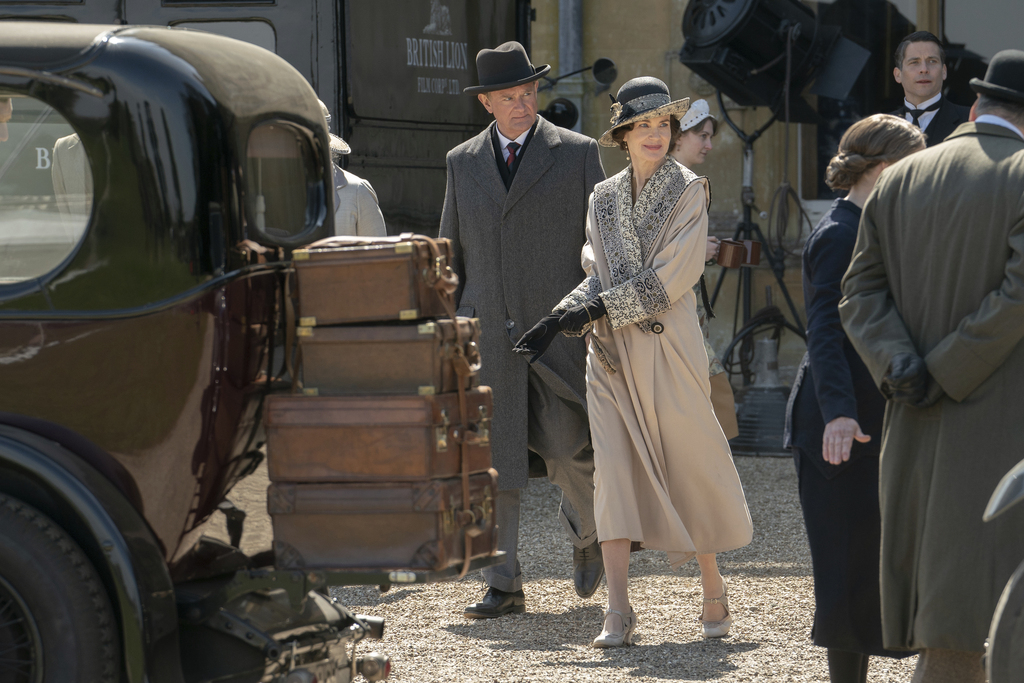 One wedding and a funeral — and a birth. That gorgeous house, never mind the leaky roof. Some sunshine, too! More bone-dry quips from Maggie Smith. And oh, the clothes — silks and satins, tulles and tiaras. What could go wrong?

Why, nothing, of course! Would YOU mess with the “Downton Abbey” formula?

This second Downton feature film is technically called “Downton Abbey: A New Era,” but could just as well be called “Downton Abbey: Really More of the Same But Slightly Later” — and that would be totally fine with the adoring fans of this endlessly durable six-season TV series. They flocked to the first film in 2019, and they’ll flock to this film, too, which is lighter, funnier and nothing if not clear in its purpose — giving a loyal audience a good time. After a few years of pandemic life, that would include more real estate porn, more stolen glances and hidden yearnings amid the period furnishings, more exquisite vintage clothes (no, we shan’t stop talking about the clothes), and some happy endings. And more Maggie! Of course.

To add a splashy bow on top, there’s a visit to Downton from splashy Hollywood, and a family field trip to the French Riviera. Dishy actors Hugh Dancy and Dominic West bring a little romance, and French film vet Nathalie Baye brings the kind of icy hauteur only the French can hope to muster (and master).

As for the swath of moviegoers unfamiliar with the show — oh, them! — that’s another story. For those who don’t know their Sybils from their Ediths, or can’t sketch a Crawley family tree on the fly, the film makes no real effort to explain the background, and with a ready-made audience, the creators likely felt no need. ( There ARE helpful refresher video s on YouTube if you really want to do some homework.)

Reliably (if not subtly) written by series creator Julian Fellowes and directed this time by Simon Curtis (fun fact: husband of Elizabeth McGovern aka the beloved Cora Crawley), the film begins in 1928, nine months after we left off. It starts with a jolt of happiness — the wedding of Tom Branson (Allen Leech) and Lucy Smith (Tuppence Middleton). Because of their unique backgrounds, this wedding unites aristocrats with servants in celebration — but the more important ensemble, truly, is what Lucy’s wearing. The vintage veil, the pear-and-diamond tiara, and that glittery Juliet cap … yes, we’re angling for a job with the costume department.

The festivities are barely over when the Dowager Countess, Violet Crawley (Smith) summons close family. Seems she’s been bequeathed a villa in southern France by a mysterious Frenchman and has decided to leave it to her great-granddaughter Sybbie. With furrowed brow, ever-sensible Lady Mary (Michelle Dockery) asks Granny if she’d considered saying no. “Do I look as if I’d turn down a villa in the south of France?” Violet asks. Touché, Dowager Countess.

Road trip! It’s the first time we’ve watched the family leave UK shores when Violet’s son Robert (Hugh Bonneville), wife Cora, daughter Edith (Laura Carmichael) and a few others accept an invitation, fraught as it may be, from the mysterious donor’s son. The villa, near Toulon in real life, is of course spectacular — maybe the job of “Downton” location scout is open? — even if the reception from the donor’s widow (Baye) is way too chilly for the Cote D’Azur.

So why would a random Frenchman gift a villa to Violet? Maybe he wasn’t so random? In any case, good thing Robert is distracted, because back at Downton, a Hollywood film crew is marauding through the place. You see, dashing director Jack Barber (Dancy) has offered a huge sum for a month on location — a sum that’ll help fix that roof — for his latest silent film starring Guy Dexter (Dominic West as Gable-esque leading man) and Myrna Dalgleish (Laura Haddock as a Jean Harlow lookalike).

It’s fun to watch the film-within-a-film unfold, especially as it impacts the starstruck servants, who end up playing more of a role than expected. Also unexpected is the spot of trouble that arises when the film hits financial woes — silent films are on the way out, and the “talkie” is the new big thing. But Myrna, alas, has a Cockney accent that won’t fly — just listen to her say the words “haute couture.”

As for Violet, she’s predictably unimpressed by Hollywood, but ever-practical. “We got through the war,” she pronounces. “We can get through this.” Movie acting fills her, though, with contempt: “I’d rather earn a living down a mine.”

Well, luckily for us, Smith does not earn her living down a mine. At 87, she’s still the best reason to keep coming back. In the end, “A New Era” is a misnomer of a title — not much has changed, which actually may be the best gift to “Downton” fans. After a tough couple of years, you could do worse than this, the latest in what may end up being a line of sequels as long as the Crawley bloodline.

Rating: PG (for some suggestive references, language and thematic elements)

Hidden Dreams in the Depths launches May 31 – PlayStation.Blog