DR MICHAEL MOSLEY: Hi-tech wristbands can be unreliable at monitoring your health 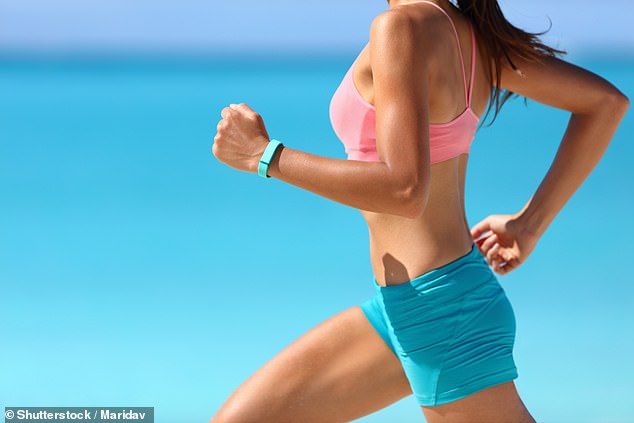 Are you one of the 26 per cent of Britons who own a fitness tracker, such as a Fitbit? I was given one a couple of years ago and for a few months I used it to monitor my daily steps and to see how well I was sleeping (the answer: badly).

I became obsessed and if I hadn’t hit my 10,000-step target, I’d march up and down the room late at night, waving my arms until I did. Then the strap broke, the tracker went into my bedside drawer and it has stayed there ever since.

Why? Well, I’m not convinced the current generation of devices is delivering the sort of improvements in health and fitness we have been promised.

Take the popular belief that wearing a fitness tracker will help with weight loss — the idea being that if you use your tracker to keep yourself active, you’ll burn calories and lose weight. Is that really what happens?

Well, no. A few years ago, John Jakicic, a researcher in the department of health and physical activity at the University of Pittsburgh in the U.S., enrolled 470 overweight people in a study where they went on a low-calorie diet, with monthly counselling on health and nutrition.

Are you one of the 26 per cent of Britons who own a fitness tracker, such as a Fitbit? I was given one a couple of years ago and for a few months I used it to monitor my daily steps and to see how well I was sleeping (the answer: badly)

After the first six months, one group of volunteers continued to receive health counselling, while the other was given activity monitors. After two years, the volunteers were weighed again and although both groups were slimmer and fitter, those who hadn’t worn activity monitors had lost and kept off nearly twice as much weight (6kg — over 13lb) as the group who had worn them (3.5kg, or nearly 8lb).

Jakicic thinks wearing these devices may encourage the belief that weight loss is primarily about what you do, rather than what you eat.

More from Dr Michael Mosley for the Daily Mail…

The danger is that once you hit your activity target, you reward yourself with a snack that contains more calories than you have burned off.

Most activity monitors also claim to tell you how much you sleep — and how much of it is refreshing, deep sleep.

But they are not particularly accurate, and being told you’re not getting enough of the right sort of sleep can induce anxiety.

When my device told me I was getting less deep sleep than I needed, I became obsessed with the need for more — and stayed awake worrying about it.

This is now known as orthosomnia, an unhealthy obsession with getting the right amount of ‘healthy’ sleep.

The term was coined a few years ago by sleep researchers at Northwestern University in the U.S. — they noted that with more and more people buying trackers, they were seeing lots of patients whose quest for a perfect night’s rest had led, ironically, to sleep problems.

In one case they described, tests on a 27-year-old woman who was complaining of poor sleep showed that she had actually slept well. Her response was: ‘Then why does my fitness tracker say I slept poorly?’

So if you use these devices to track your sleep, take the results with a pinch of salt: the best measure of whether you’re sleeping enough is how tired you feel in the morning. And do bear in mind that when using them, you are also providing the companies that sell them with lots of data about you. And that data can be hacked.

I’m not too worried about hackers learning how many steps I do, or how well I sleep, but more disturbing is that they could, potentially, use trackers to guess the PIN code of your bank account.

Researchers from the Stevens Institute of Technology in the U.S. fitted 20 volunteers with an array of fitness wristbands and smart watches, then asked them to enter a secret PIN code into a keypad or laptop.

Fitness trackers monitor and store information about your hand movements, so the researchers were not only able to hack these devices but using a computer program they accurately guessed the PIN which had just been entered more than 90 per cent of the time.

Despite my criticisms of current wearable technology, I do believe there will soon be a lot more devices able to measure useful things — such as blood sugar levels and how well your kidneys and liver are functioning — without needing to stick needles into you.

In the meantime, here are some old-fashioned yet cheap and reliable ways I monitor my health:

How aftershave can help protect against traffic fumes

I’m currently filming a new TV series in Los Angeles, the City of Angels — although I think it should be renamed Los Autos, the city of cars.

It is dominated by traffic, with air pollution so bad you can almost taste it. To be fair, some parts of the UK are no better.

One of the most dangerous emissions from cars, buses and lorries is PM2.5 — tiny particles so small they penetrate deep into your lungs when you breathe in, and are then carried around your body.

Last year the UK’s PM2.5 levels were 1.8 times higher than the World Health Organisation regards as safe. The cleanest air was found in Midlothian in Scotland; the worst air was in Lewes, near Brighton.

Air pollution kills an estimated 35,000 Britons every year, mainly through heart disease and stroke. But it’s the effect on children that I find particularly worrying

Air pollution kills an estimated 35,000 Britons every year, mainly through heart disease and stroke. But it’s the effect on children that I find particularly worrying.

A study last year by Stanford University in the U.S. found that it reduces IQ and changes children’s genes so they are more likely to develop heart disease later in life.

What’s especially disturbing is that because their genes have been altered, these changes are likely to be handed down to their children.

The UK’s decision to ban the sale of new petrol and diesel cars from 2030 is a step in the right direction. But what can you do now to reduce your risk?

First, if you must drive, try to avoid being caught in traffic jams because you will be sitting in a sea of air pollution spewed out by other cars.

Closing the windows makes little difference, and nor does wearing masks — unless they pass the ‘Brut test’: put on a mask and splash some pungent aftershave such as Brut (or perfume) on your hand. If you can smell it, the mask isn’t good enough. Next, try to surround yourself with trees and plants (including pot plants at work) — the leaves are good at trapping small particles and absorbing gaseous pollution.

Finally, eat more celery, carrots, parsnips and parsley. A study on mice showed these vegetables, which are rich in antioxidants, help protect against the damaging effects of acrolein, a chemical produced by cars which irritates the lungs and skin.

At a time of a serious shortage of wheat, that is especially important.

When I don’t share a bed with my wife, Clare, I sleep much worse, even though she is prone to sleepwalking and sleep-talking.

The case for sharing a bed is compelling, with a recent survey from Arizona University in the U.S. showing that those who did reported less fatigue and stress — and more time asleep — than those who slept alone.

How to boost the fertility rate