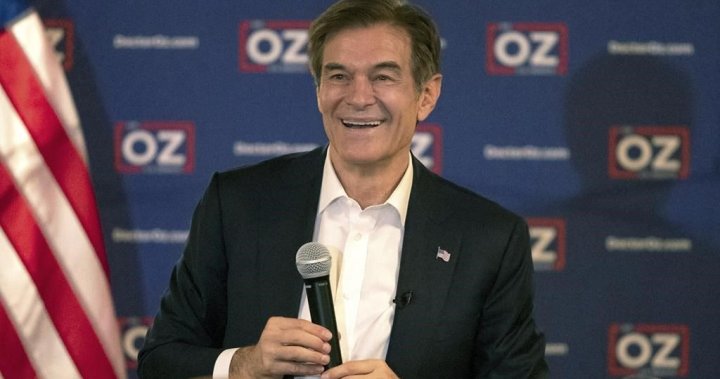 McCormick said he had called Oz to concede.

“It’s now clear to me with the recount now largely complete that we have a nominee,” McCormick said at a campaign party at a Pittsburgh hotel.

He added, “Tonight is really about us all coming together.”

Before the recount, Oz led McCormick by 972 votes out of 1.34 million votes counted in the May 17 primary. The Associated Press has not declared a winner in the race because an automatic recount is underway and the margin between the two candidates is just 0.07 percentage points.

Friday’s development sets up a general election between Oz, who was endorsed by former President Donald Trump, and Democrat John Fetterman in what is expected to be one of the nation’s premier Senate contests.

The result could help determine control of the closely divided chamber, and Democrats view it as perhaps their best opportunity to pick up a seat in the race to replace retiring two-term Republican Sen. Pat Toomey.

Fetterman, the state’s lieutenant governor, acknowledged earlier Friday in a statement that he nearly died when he suffered a stroke just days before his primary. He said he had ignored warning signs for years and a doctor’s advice to take blood thinners.

Oz, who is best known as the host of daytime TV’s “The Dr. Oz Show,” had to overcome millions of dollars in attack ads and misgivings among hard-line Trump backers about his conservative credentials on guns, abortion, transgender rights and other core Republican issues.

The 61-year-old Oz leaned on Trump’s endorsement as proof of his conservative bona fides, while Trump attacked Oz’s rivals and maintained that Oz has the best chance of winning in November in the presidential battleground state.

Rivals made Oz’s dual citizenship in Turkey an issue in the race. If elected, Oz would be the nation’s first Muslim senator.

Born in the United States, Oz served in Turkey’s military and voted in its 2018 election. Oz said he would renounce his Turkish citizenship if he won the November election, and he accused McCormick of making “bigoted” attacks.

Oz and McCormick blanketed state airwaves with political ads for months, spending millions of their own money. Virtually unknown to voters four months ago, McCormick had to introduce himself to voters, and he mined Oz’s long record as a public figure for material in attack ads. He got help from a super PAC supporting him that spent $20 million.

Like McCormick, Oz moved from out of state to run in Pennsylvania.

Oz, a Harvard graduate, New York Times bestselling author and self-styled wellness advocate, lived for the past couple of decades in a mansion in Cliffside Park, New Jersey, above the Hudson River overlooking Manhattan _ drawing accusations of being a carpetbagger and political tourist.

The celebrity heart surgeon stressed his connections to Pennsylvania, saying he grew up just over the state border in Delaware, went to medical school in Philadelphia and married a Pennsylvania native.

Before he ran, McCormick was something of a celebrity on Wall Street, running the world’s largest hedge fund, and had strong Republican Party establishment ties going back to his service in former President George W. Bush’s administration. His wife, Dina Powell, was a deputy national security adviser to Trump and had strong party connections as well.

McCormick had long considered running for public office, and moved from his home on Connecticut’s ritzy Gold Coast to a house in Pittsburgh before declaring his candidacy.

1:24
Biden calls on Republicans senators to allow gun control measures to come up for a vote

He stressed his connections to Pennsylvania: growing up on a farm as a high school wrestling and football star before going to West Point and fighting in the Gulf War. He also spent 10 years in Pittsburgh in business, giving him a stronger claim to Pennsylvania than Oz.

Like Oz, McCormick had worked hard to earn Trump’s endorsement, and he insisted he was the authentic “America First” candidate, invoking Trump’s nickname for his governing philosophy.

However, Trump attacked McCormick repeatedly in the campaign’s final two weeks, leading a rally for Oz where he called McCormick the “candidate of special interests and globalists and the Washington establishment.”

Despite that, McCormick closed the campaign by airing a TV ad showing a video clip of Trump in a private 2020 ceremony congratulating McCormick, saying “you’ve served our country well in so many different ways.”

“You know why he said that,” McCormick said in the TV ad. “Because it’s true. I risked my life for America and I’d do it again in a heartbeat. … I’m a pro-life, pro-gun, America First conservative and damn proud of it.”