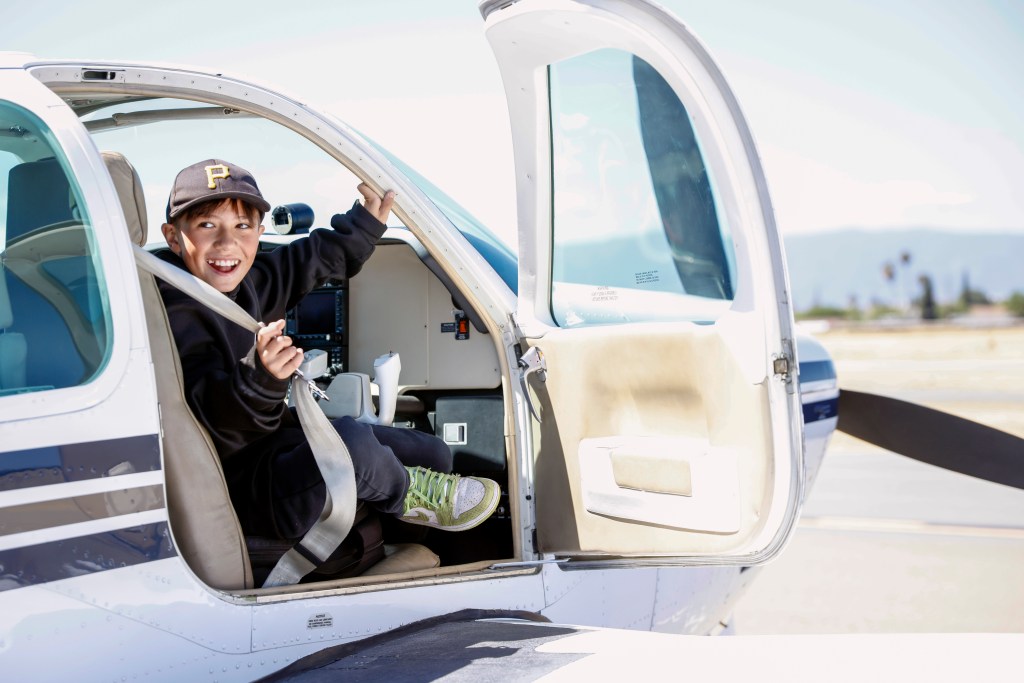 But the pilot who has flown since 1998 handed off control of the six-seater, single-engine aircraft to his co-pilot: 10-year-old Julian Aviles.

“Planes aren’t quite like cars,” Marshall said to Aviles, stretching out his arms to demonstrate how the plane moves before take-off. “Keep looking at the yolk — that’s how we go up and down, you see that? Hey Julian, that’s going to be your job.”

Brothers Armando and Ernesto Tapia joined Julian, climbing into the airplane in their Nike sneakers and baseball cleats, which they lace up on the Eastridge Little League field next door to the airport.

More than 200 kids took to the skies during Saturday’s Young Eagles Flight Rally, a monthly affair put on by the local Experimental Aircraft Association chapter and volunteer pilots across Silicon Valley. The program has provided more than 2,500 free flights to children since its first year in 1992.

“I’ve flown 300 Young Eagles in my lifetime,” Marshall said after landing back at Reid-Hillview. “I think it’s one of the greatest programs in the world. The kids get up into the air; they get to fly for free. Julian’s was a natural flying the plane; he could be an airline pilot — you never know.”

But beyond putting smiles on children’s faces after landing back on solid ground, Saturday’s event was intended to bring attention to — and hopefully reverse — Santa Clara County’s anticipated closure of Reid-Hillview by 2031. The county Board of Supervisors voted in 2018 to stop accepting federal grant funding to help maintain operations at the airport.

Previous claims that the ground around Reid-Hillview contains elevated levels of lead have been challenged, after a Santa Clara County-commissioned study reported earlier this month that soil samples did not exceed state and federal “danger levels” of lead, ranging from 50 to 800 milligrams per kilogram. Small planes like the ones at Reid-Hillview almost exclusively take flight using leaded aviation fuel to power their piston engines.

Debate is still ongoing about the airport’s contribution to airborne lead levels, after an August study found that children living near Reid-Hillview had elevated levels of lead in their blood.

The Little League fields where Aviles and the Tapia brothers play down the street are also at risk. The county has ordered the teams to vacate the baseball diamonds, which may be shut down because of the potential contamination.

However, several parents and community members in East San Jose feel that the dangers — at the airport and the baseball fields — are being exaggerated in an attempt to develop the 180-acre airport property into housing.

Ruby Arias said if there’s lead at Reid-Hillview airport, there’s lead everywhere else, too. If the county doesn’t shutter the schools, malls and homes nearby, too, she said closing the airport is a greedy move that also shuts down opportunities for the community, especially the children.

“Most of these kids are never going to get to fly an airplane like that,” Arias said. “This gives them the opportunity to feel more included in the community itself. I feel like the event today is bringing a lot of attention to the fact that they want to close the airport. Hopefully, it brings people out to realize that it’s important.”

Capt. John Heldt has spent 10 years with San Jose’s Civil Air Patrol, which specializes in search-and-rescue, disaster relief, and wildfire tracking, flying out of Reid-Hillview. If the airport closes, their response times would suffer, he said.

“I can’t imagine why we have politicians here that would see other uses for this land,” Heldt said. “When fire is burning down the hill and you live over there, do you want your planes coming from San Martin or Hollister?”

But even more than that, Heldt said opportunities for nearby children to grow and learn would be lost if Reid-Hillview is shuttered.

“We have our Civil Air Patrol cadet program,” he said. This is about character development and teaching them how to become leaders.”