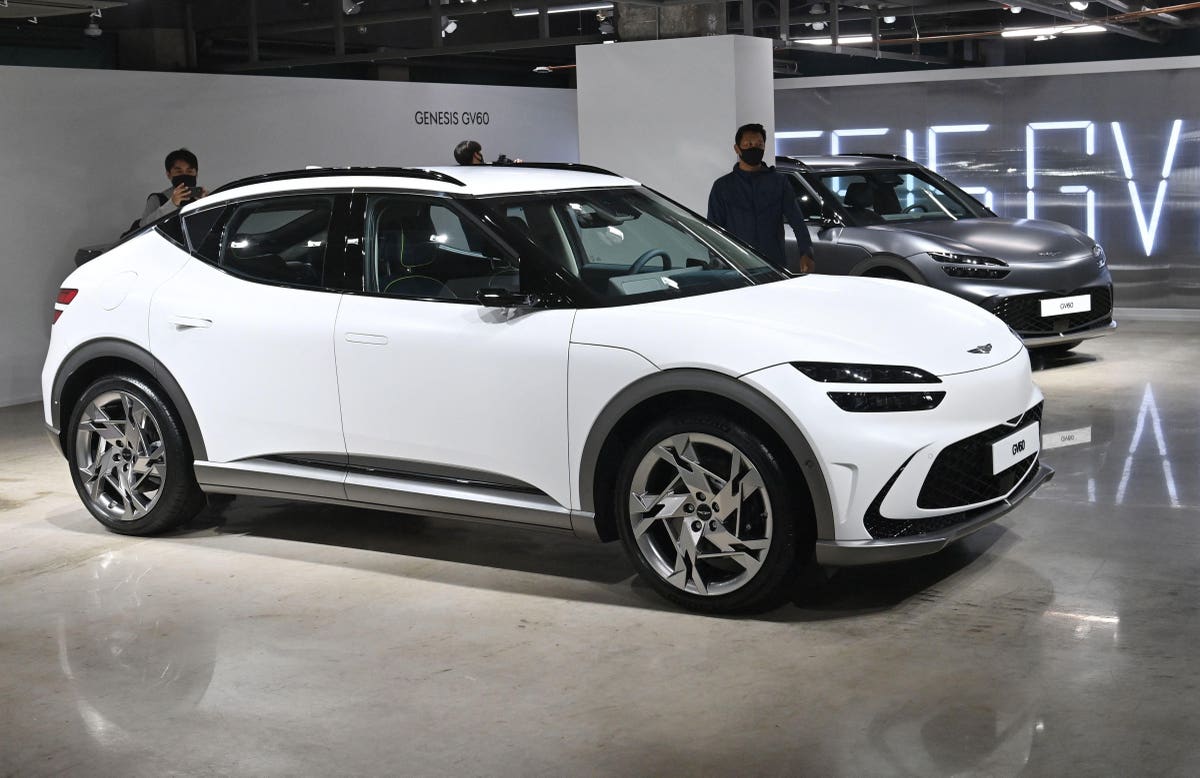 Genesis wants the GV60 electric car to lead its charge into the European premium market and although matching the leading German competition in many ways, its battery performance does not establish an expected advantage.

The GV60’s 77.4 kWh battery performance landed it squarely in the middle of its likely competition although its 800-volt fast charging ability gives it an edge over most. The GV60’s official claim of 289 miles became an average 234 miles in the real world from my home charging, that’s a miss of about 20%. Not as good as the Jaguar I-Pace’s 90 kWh battery claimed 292 miles versus actual 248 miles (minus 15%). The Audi E-Tron 95 kWh battery claims 241 miles and delivers an average 180 miles (minus 25%) and the Volvo XC40 Recharge 78 kWh managed 197 miles, down just over 17% from the 256 miles claim.

Fast but legal long-distance cruising is not a forte in this group either. There was a 39% penalty to claimed range availability for the GV60, 32.8% for the Jaguar, 23% for the Audi and 35% for the Volvo. The Polestar 2 was a hopeless minus 59%. This means if range availability is claimed as 100 miles, the GV60’s 39% penalty means only 61 miles will be delivered; for the Polestar 2, only 41 miles. Official data for the range of electric cars is consistently exaggerated.

There was a clear winner. The Tesla Model 3 offered 360 miles, gave 341, and even though it still lost miles at a close to 30% rate while high-speed cruising, it tops the chart with 239 miles of fast-lane range.

For the electric car revolution to succeed, battery technology needs to improve dramatically, while charging stations must be as ubiquitous as gasoline and diesel ones. If you’re planning any long-distance driving in your electric car, best hire a diesel for the duration. All electric cars shed power at an alarming rate at speeds over around 60 mph.

Experts agree that indicated 80 mph cruising speeds, the norm in Britain, generate significant range penalties. Most potential buyers of electric cars are not made aware that if they raise their speed over 60 mph, range begins to drain away, and in mainland Europe often with a 130 km/h (81.25 mph) speed limit, it will disappear at an even more alarming rate. In Britain, the speed limit is 70 mph on motorways, and in the real world this becomes about an indicated 80 mph. A similar leeway happens in Europe, except in Germany of course where big chunks of the motorway system don’t have a speed limit at all.

“Electric cars are much more energy efficient (than internal combustion engines (ICE) vehicles), and that efficiency is relatively constant over the entire operating range. What this does mean is that the range will be much lower at high road speeds than it is at low road speeds – simply because it takes more energy per mile at high speed than it does at low speed due to the aerodynamic drag of the car increasing with speed,” Greenwood said.

“This is masked a bit by ICE engines as they are very inefficient at low speeds – so although the energy requirement of the car is lower, the inefficiency of the engine means that the petrol consumption is not that different to what it is at high speed where the drag is higher but the engine is a bit more efficient,” Greenwood said.

Matthias Schmidt of Schmidt Automotive Research doesn’t expect the GV60 to pose much of a threat to the Germans because it missed an opportunity while Mercedes, BMW and Audi were slow starters, relying on producing electric versions of ICE models. Tesla grabbed sales because of early German disinterest.

There will also be new competition from Chinese players to those willing to take a chance on something different.

“The closest competition (for the GV60) could come from the likes of NIO, though that would be competing for a similar customer demographic prepared to try something new. I don’t believe Genesis has the brand legacy to compete with BMW/Mercedes, but lots of people, including me, said that about Tesla,” Schmidt said.

Genesis might also benefit from being able to supply the market, as some German manufacturers struggle for critical components.

“15,000 units would be an impressive start in 2023, but I wouldn’t expect volumes to exceed 20,000 (in Western Europe), putting it in Polestar territory. Chinese manufacturers like NIO, Xpeng, Hongqi and BYD that are entering the market are likely to dilute the chances for this type of vehicle in this segment,” Schmidt said.

But a looming energy crisis for German and European industry might play into Asian hands.

“An advantage for Genesis and other Asian manufacturers is if the lights go out at European factories and they are still able to produce in Asia they have a huge advantage. I assume their production costs will be a lot lower and could skirt them on pricing despite the 10% import tariffs applied to imported cars from Asia,” he said.

Genesis established itself in the U.S. before turning its ambitions to Europe but California-based auto consultancy AutoPacific only sees GV60 sales of about 3,000 this year and no more than between 7,000 and 8,000 annually.

“We expect the EV version of the larger GV70, which will be built in the U.S. and thus qualifies for a tax break unlike the Korea-built GV60, to be more popular with American consumers,” said AutoPacfic analyst Ed Kim.

“The Genesis brand is going to quickly pivot to be all-electric – which is something it may be able to accomplish more easily than more established luxury brands since it does not have the legacy or heritage of internal combustion engines like Mercedes-Benz or BMW. While the GV60 is a neat and tidy EV with unique styling and a great interior, in the U.S. it is expected to be eclipsed by sales of the Electrified GV70, which is larger – always a plus for us Yanks,” Kim said.

Inovev believes the GV60 will be able to mount a strong challenge to the Germans, which have yet to establish a commanding presence in the electric vehicle sector.

The top-of-the-range Genesis GV60 AWD Dual Motor (Sport Plus) has the performance to compete with the best, including even Tesla’s “ludicrous” acceleration, with its zero to 60 mph in 3.9 seconds. In Britain, there are 3 versions of the GV60 – Sport, Premium and Sport Plus. Prices start at £47,005 after tax ($52,400). Genesis has already launched a range of ICE powered luxury saloons, station wagons and SUVs and the GV60 is its first all-electric vehicle. It plans to go all-electric in 2025 here.

I was dying and denied an abortion. Now I’m battling a country’s ban from 6,000 miles away