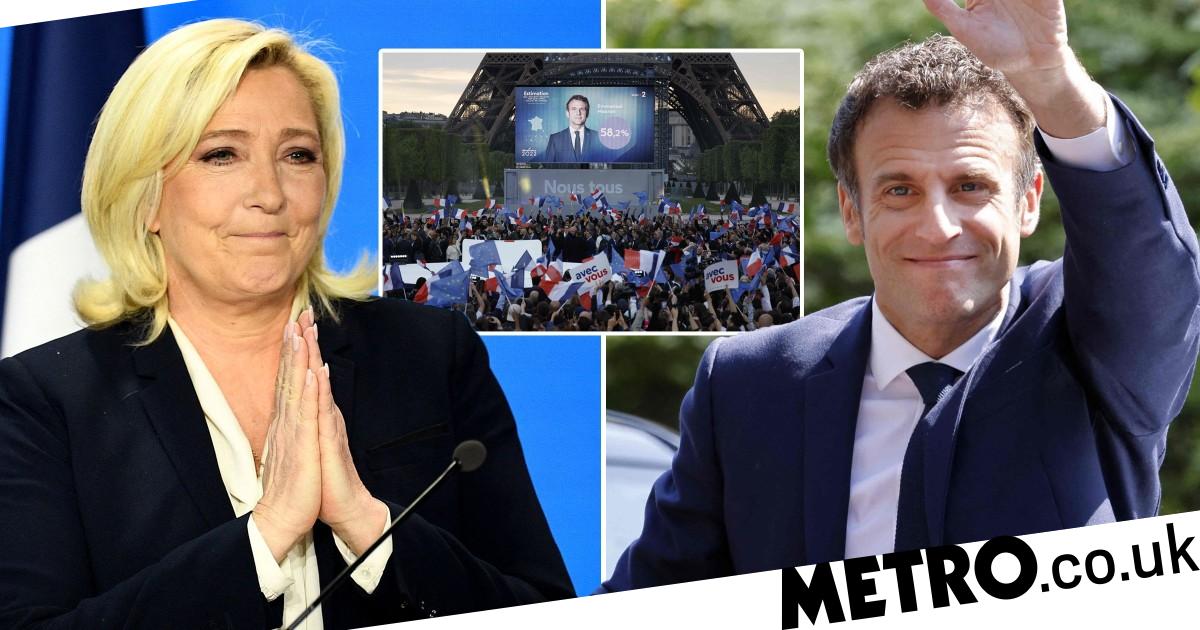 Exit polls indicate that Emmanuel Macron has easily won the French election, with a projected 58.2% lead.

Polls closed at 7pm UK time, with votes set to be counted throughout the night.

If exit polls are borne out, Macron is set to become the first French president in 20 years to win a second five-year term, with Len Pen set to gain 41.8% of the vote.

A sea of Macron’s supporters were seen dancing and jumping next to the Eiffel Tower in Paris, waving French and EU flags as Daft Punk played.

The vote this year is set to be a lot closer than the election in 2017, when newcomer Macron won in a landslide with his party En Marche.

He has since faced criticism for moving further to the right, with 7.7 million people deciding to vote for leftist candidate Jean-Luc Melenchon in the first round of voting on April 10.

However, Macron seems to have reliably held onto power in the final round of votes, with congratulations already rolling in.

Boris Johnson said: ‘Congratulations to Emmanuel Macron on your re-election as President of France.

‘France is one of our closest and most important allies. I look forward to continuing to work together on the issues which matter most to our two countries and to the world.’

Le Pen’s support had grown during this campaign to her highest level ever, and turnout in today’s vote was seen as crucial to who was named the winner.

Many were expected to vote for Macron in order to block Eurosceptic Le Pen from taking power, as her ideas are seen as extreme, such as a plan to ban women wearing the Muslim headscarf in public.

The result will send reverberations around the world, with the two candidates taking differing views on the war in Ukraine. France under Macron has played a key role in diplomatic efforts and support for sanctions against Russia.

It means France will not get its ‘Brexit moment’, as Macron had warned of before the vote.

Le Pen, whose party is the National Rally, has been trying to win power in France for decades with three presidential bids. Her father Jean-Marie Le Pen founded the party when it was still known as the National Front, and himself tried to get elected five times.

She gave a speech following the exit polls criticising ‘elites’ and appearing to concede defeat.

But she said her unprecedented score in a presidential election represents ‘a shining victory in itself’.

‘The ideas we represent are reaching summits,’ she claimed.

Le Pen had tried to soften her image and focus more on things like the cost of living than on anti-immigration, breaking with her father’s legacy as he had notoriously repeatedly denied the Holocaust.

Among French voters casting their vote in London today was Lydie Rybacki, a nutritionist from Paris who has lived in Kensington for 48 years.

She said she believes Le Pen has undergone ‘a lot of improvement’ over the past five years.

However, another voter at the polling station said she wanted to vote against ‘discrimination and hatred’.

Elisabeth Sang, 45, a cabin crew member from Allier living in Teddington, said: ‘Today it’s about voting for the least worst, and the options aren’t great.

‘I think it’s quite sad that when people are frustrated, (they turn) to the extreme. I would rather vote for a more positive message than discrimination and hatred.’

Her friend Elise, a translator from Brittany living in Richmond, added: ‘The world really really doesn’t need another far-right president or head of state, that’s my main motivation for turning up.’