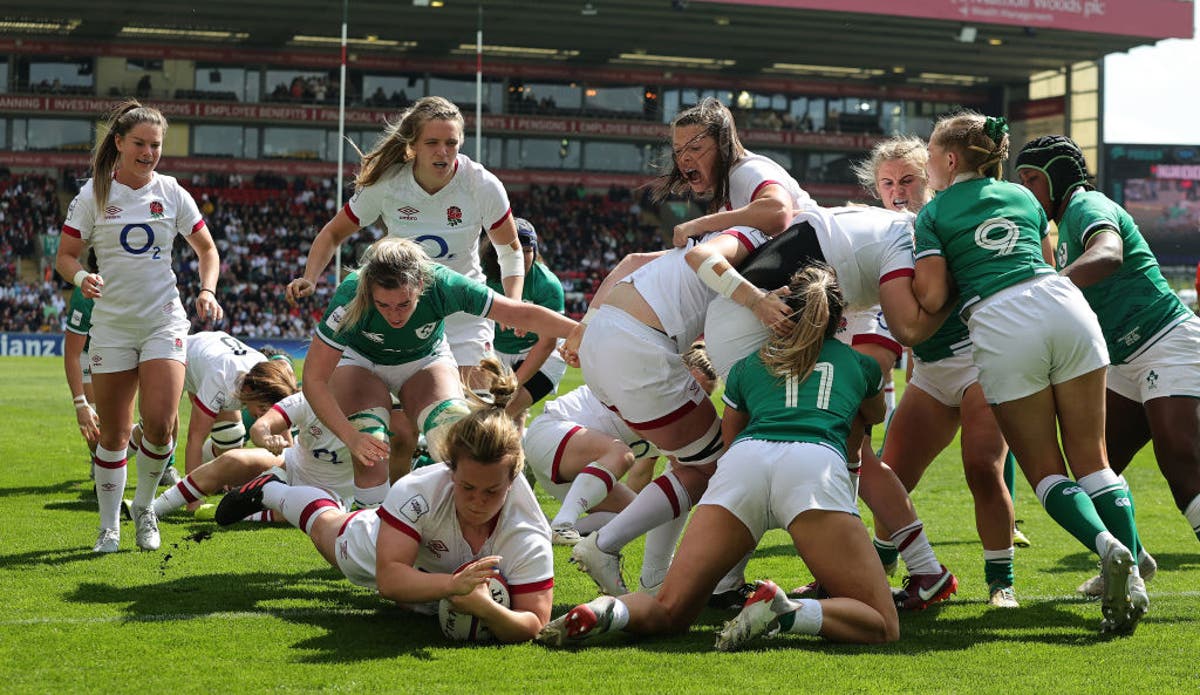 A dominant England side propelled themselves back to the top of the TikTok Women’s Six Nations with a 69-0 bonus-point victory over Ireland in their penultimate match.

Lark Davies opened the scoring two minutes into the match at Mattioli Woods Welford Road in front of a record-breaking Red Roses home crowd of 15,836.

But the visitors held the hosts to just two tries in the first half, before Ireland were twice reduced to 14 women after the break with Dorothy Wall sent to the sin bin and Sene Naoupu shown red for head-on-head tackles.

Hometown hero Emily Scarratt gave the Leicester faithful plenty to celebrate after leading the side out on her 100th cap, converting five tries on a sunny Sunday afternoon as England added nine more scores in the second half to set up a TikTok Women’s Six Nations Grand Slam decider against France in Bayonne on Super Saturday next weekend.

Abbie Ward won an early lineout for the Red Roses and the rolling maul completed the job, Davies dotting down for her side’s first try.

Scarratt missed her attempt to add the extras, but the early score fuelled the crowd, who roared as Ward appeared to cross for another, only for referee Amber McLachlan to disallow the score for a forward pass.

Still, the Red Roses showed their quality in the scrum and their determination soon told against an Ireland side who couldn’t maintain possession and England took full advantage.

Ireland withstood the tide of England attack, but barely left their 22 and couldn’t hold off another rolling maul from the hosts for long, the Red Roses inching forward before Bristol Bears prop Sarah Bern crossed the whitewash on 16 minutes for England’s second try.

But it was just the five points added as Scarratt missed her second conversion attempt.

The visitors continued to display resilience and finally broke into England’s half, Leanne Infante conceding a penalty for a ruck infringement to give Ireland their first real opportunity to get on the scoreboard.

But Nicole Cronin’s attempt sailed well off-target and England quickly regained possession but continued to be frustrated by Greg McWilliams’ determined side, who were dealt another blow as fly-half Cronin was forced off with injury and replaced by Michelle Claffey.

Still, Ireland appeared bolstered by their first-half performance, forcing six turnovers and Molly Scuffil-McCabe expertly executed a last-ditch tackle to prevent Lydia Thompson from scoring a try before the break.

But Middleton’s side regrouped and settled immediately in the second half, Marlie Packer breaking down the left to score inside two minutes, and the Leicester faithful erupted as home favourite Scarratt kicked the extras.

A high tackle on Breach saw Wall sent to the sin bin on 43 minutes, a punishment Ireland could ill afford as Middleton took full advantage of his deep bench, bringing on Amy Cokayne, Hannah Botterman, Maud Muir and Poppy Cleall before the 50-minute mark.

Thompson picked up a pass from Helena Rowland out wide, tearing down the right and sliding across the touchline. And It took just three minutes more for Middleton’s second-half swap to pay off, Cleall darting around green shirts before scoring England’s sixth with Scarratt kicking the conversion.

And the Red Roses centurion soon added four more to her afternoon’s tally by converting tries from Botterman and Cleall’s second after 66 minutes before Ellie Kildunne danced over.

Ireland were dealt a further blow when winger Eimear Considine was stretchered off with injury and Naoupu was shown red for another high tackle, this time on Scarratt.

But England weren’t finished, Kildunne and Thompson both crossing to seal their doubles to round off the win.

The TikTok Women’s Six Nations is more accessible than ever before. To find out how you can watch the Women’s Championship visit: womens.sixnationsrugby.com/tv/