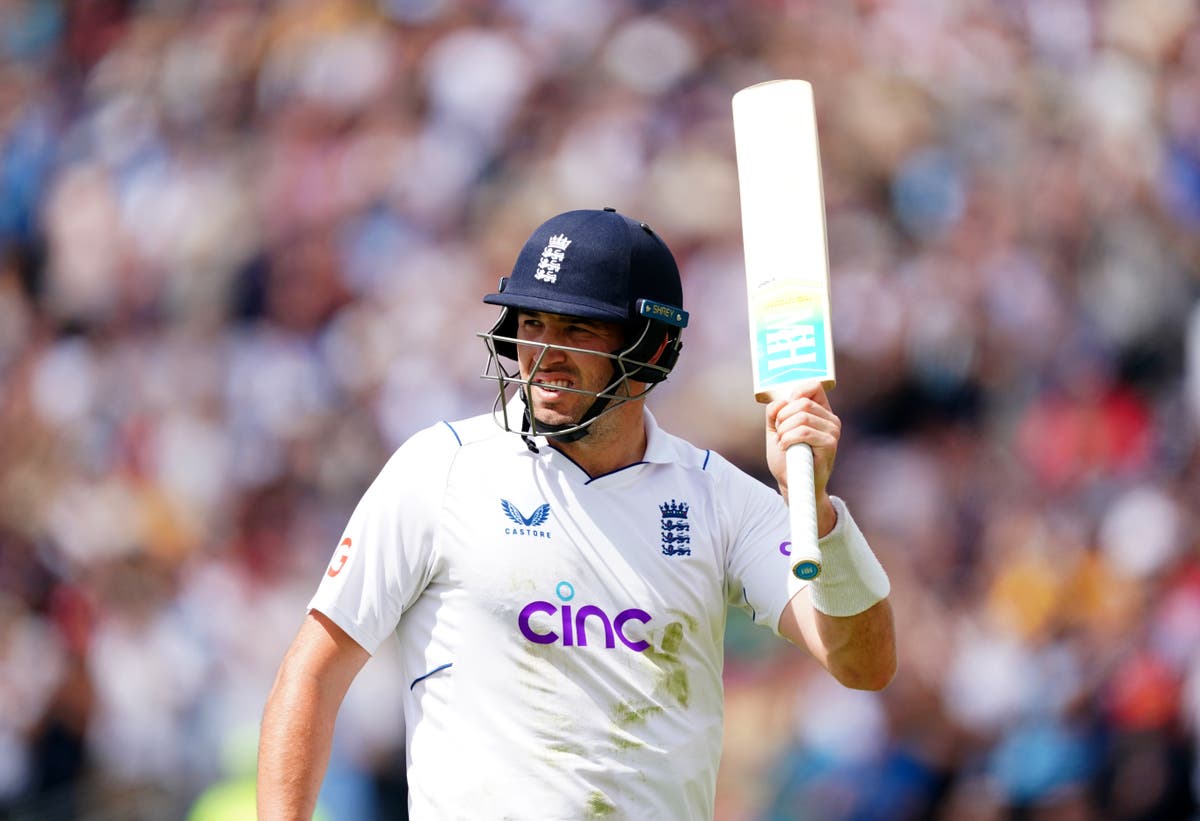 Jamie Overton has already ridden the highs and the lows of Test cricket in the first three days of his England career and admitted he was enjoying leaving fans “on the edge of their seats”.

Despite being handed a debut at Headingley due to his 90mph pace bowling, Overton almost had his name up in lights for a century in his first ever Test innings.

Instead he was dismissed for 97, a knock that helped drag the game away from New Zealand during a 241-run stand with Jonny Bairstow, who hit an outstanding 162.

Overton did not have long to agonise over the missing three runs, with England hurried back into the field with a 31-run lead.

The tourists looked rock solid at 125 for one, but when Overton had Tom Latham caught behind off the first ball of the evening session the tone shifted. They stumbled to 168 for five by the time rain brought an early end, with England surely satisfied to be just 137 behind.

“It’s been good fun. Obviously I was very disappointed getting out on 97, but I feel like I’ve contributed to the team,” he said.

“It’s always a challenge when you first go into something, but I feel I’ve done okay. I’d like to take a few more wickets, but I’m more than happy to get 97. I didn’t think I’d get anywhere near that, especially coming in at 55 for six.

“Ben Stokes has got the ethos of trying to be entertainers for everyone and he said in the changing room earlier that the way me and Jonny played had the crowd on the edge of their seats. That’s entertaining cricket and that’s what we want to be doing. I like to think I’m quite an entertaining cricketer.”

Overton, who spent most of his first-class career at Somerset before moving to Surrey, cheerily admitted the experience of playing in front of a well-oiled sell-out crowd at Headingley represented his biggest stage so far.

The evening session was particularly enjoyable for the home team, with the Kiwis’ hard-fought foundation crumbling and the decibel levels rising, building to a crescendo as the likes of Stuart Broad, Bairstow and Stokes urged a show of support.

“The crowd obviously got involved a little bit and we tried to gee them up because that always helps us as well,” Overton said.

“We chatted at tea about the fact the afternoon session wasn’t that great for us. We didn’t feel like we bowled and fielded the way we wanted to, so coming out after tea it was just trying to enjoy ourselves, put the New Zealand guys under pressure, and that’s what we did.

“I’ve definitely not experienced anything like that before. The closest I’ve had was a Surrey against Somerset game, Ryan Patel getting things going down at third man…that was loud but it was nothing like this.”

In the long term, it is Overton’s bowling that will determine how long, and how successful, his time with England is. As such, it was his tone-setting dismissal wicket of top-scorer Latham that did most to aid his cause.

“I like to put my hand up in those situations when things are quite tough, sometimes that’s when I get given the ball and I try to make the most of it,” he said.

“It was obviously a great feeling getting that wicket and then try to get on the train with everyone else. I think that last session put us right in the box seat.”

Harry’s Family, The Press, The Taliban, And His Mission To…