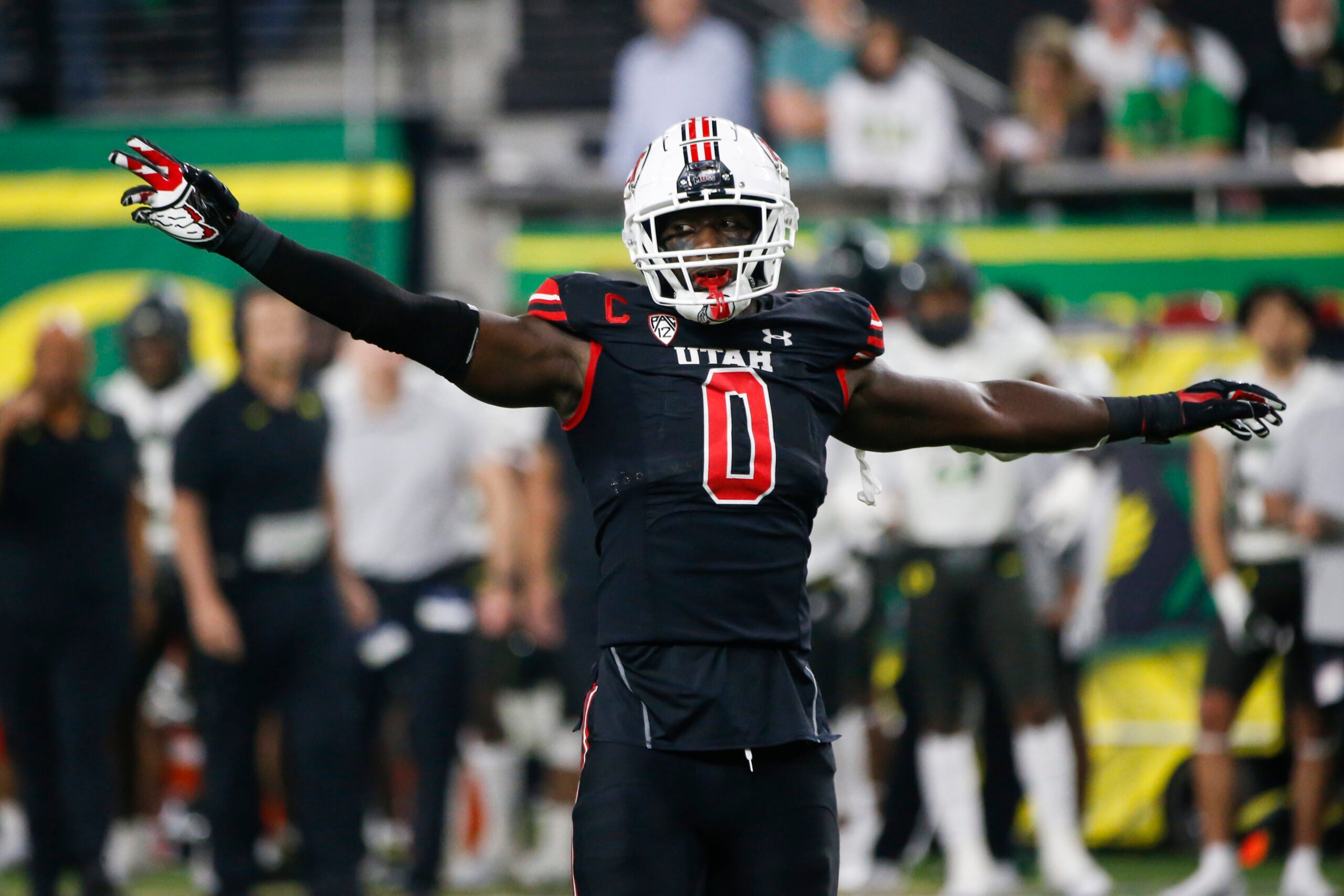 With just days until the first round takes place on Thursday, draft experts are preparing their final mock drafts of the season. Here’s who they’re predicting the Patriots – who hold the No. 21 overall pick and have eight total selections – will draft.

In a combined three-round mock, McShay and Kiper have the Patriots addressing arguably their three biggest needs with their first three picks.

Dean, whom McShay ranked as the best linebacker in the 2022 class, was a standout on Georgia’s historic defense that won the national title in 2021, earning the Butkus Award for being the country’s top linebacker. In previous articles, McShay’s stated how much he loves Dean’s fit in New England.

“The one player I would kill to see with the Patriots — just because I love him and know where he would excel the most would be in New England with Bill — would be [Georgia’s] Nakobe Dean,” McShay told ESPN’s Patriots reporter Mike Reiss earlier in April.

“I’ve talked and met with him, and I’ve talked with multiple scouts and we all kind of agree: There isn’t a better player in this class in terms of football IQ. You match that IQ with what New England tries to do — they’re so multiple and differentiate from week to week — that would be a lot of fun to watch.”

The big question surrounding Dean is his size. He’s only 5-foot-11 and the Patriots have historically drafted linebackers who are at least 6-foot-2 or taller in the earlier.

In the second round, Kiper has the Patriots selecting Parham to help replace Shaq Mason, who was traded to the Buccaneers in March.

“Parham just feels like a Patriots kind of lineman,” Kiper wrote. “He’s a veteran (51 college starts) who is technically sound. He played both guard spots and right tackle for the Tigers, but he will likely stay at guard in the NFL.”

Parham is the biggest guard out there, standing at 6-foot-3 and weighing 311 pounds, but he is a tremendous athlete for the position. He got a nine out of 10 on the relative athletic score, which gives him some promise as a long-term prospect.

Finally, McShay has the Patriots selecting Flott to help fill their need at corner following the departure of J.C. Jackson.

Schrager has the Patriots selecting a corner much earlier in his mock draft, citing it as a need that the Patriots should use a higher pick on.

“The Patriots didn’t re-sign J.C. Jackson and are looking at Jalen Mills and Malcolm Butler as the likely starting corners. Neither is the long-term answer at CB1,” Schrager wrote. “McDuffie has a lot of fans around the league.”

McDuffie’s consistently viewed among scouts as one of the best cornerback prospects in the 2022 NFL Draft. NFL Network draft expert Daniel Jeremiah has the Washington prospect ranked as his second-best corner in the upcoming draft.

Like Schrager, Davis has the Patriots taking a corner in the first round of his mock, too.

“The more you watch him on tape, the more you like what you see,” Davis wrote. “The Pats have lost Stephon Gilmore and J.C. Jackson over the last two years, so this Clemson Tiger will be drafted to play right now.”

Booth isn’t viewed as highly as McDuffie, but is still viewed in well-regard amongst his peers. Jeremiah ranks him as the fourth-best corner in the draft and many other experts have Booth getting drafted in the first round. Booth’s defended the deep ball well, having the lowest passer rating against on passes of at least 20 yards in 2020 (9.0). He recorded three picks in 2021, which helped him earn first-team All-ACC honors.

The other linebacker prospect that’s been ranked as one of the two best in the 2022 class is Lloyd, who Jones-Drew has the Patriots selecting in his mock.

Like Dean, Lloyd also had a monstrous 2021 season. He had 111 total tackles (22 for loss), seven sacks, four interceptions, and a forced fumble, helping him earn the Pac-12 Pat Tillman Defensive Player of the Year last season.

Dean also fits the Patriots’ mold of a linebacker, at least from a size standpoint. He’s 6-foot-3 and weighs 237 pounds, giving him a clear edge over Dean in that department.

The interior offensive line is probably the Patriots’ biggest need on offense entering the draft, and Reuter has the Patriots using their first-round pick to address it, predicting a trade down to select a local kid.

“The Patriots need help in the interior of their offensive line after trading Shaq Mason to Miami and losing Ted Karras in free agency,” Reuter wrote. “Johnson’s savvy play and mobility gives him the capability to step into the lineup right away, probably at guard for now and potentially at the pivot when David Andrews retires. The BC product also has experience at left tackle, which could come in handy if Isaiah Wynn misses time due to injury again.”

Johnson’s been on the rise ever since his impressive week at the Senior Bowl, with several experts expecting him to be selected in the first round. Jeremiah ranks him as the third-best interior offensive lineman on his draft board, for instance.

Johnson had an impressive redshirt senior season, earning first-team All-American honors. He was actually a left tackle at one point during his time at BC, but most scouts project Johnson to stay at guard.

Similar to McShay and Kiper’s three-round mock, Reuter has the Patriots addressing their three biggest needs with their first three selections. He has the Patriots selecting Muma, a third-team All-American in 2021, to help fill their need at linebacker. Muma had 142 tackles (eight for loss), 1.5 sacks, three interceptions, and a forced fumble last season. His size is very similar to Loyd’s, standing at 6-foot-3 and weighing 239 pounds.

Jones, who Reuter has New England selecting with its third overall pick, was a consensus All-American in 2021, recording an FBS-best five interceptions last season. Even though he was a ballhawk, Jones isn’t projected to go in one of the first two rounds of the draft. He’s only 5-foot-8 and projects to be a slot corner.

Orr has the Patriots selecting Lloyd in his mock despite having some reservations about the pick.

“This is a difficult one,” Orr wrote. “I don’t like having Lloyd on the board for this long. I don’t necessarily like the Patriots taking him, but there isn’t a coach who could better serve the Utah star than Bill Belichick. Lloyd would help the Patriots create all kinds of legal defensive confusion. He can shoot upfield and take down backs, which is essential in a division with two teams regularly running outside zone. He can also take away intermediate targets, which seriously hampers the progression for two younger quarterbacks in the division.”

Lloyd is definitely one of the more popular projected picks for the Patriots entering draft week as Fornelli predicts New England will select him, too.

“Linebackers are the new running backs in that it doesn’t matter how good they are; you just don’t see them going early in drafts as much as you used to. Don’t let Lloyd falling this far fool you. He’s a terrific prospect that could flourish in New England’s defense.”

ESPN Patriots beat reporter Mike Reiss didn’t do a mock draft, but he gave some insight on what he thinks the team will do in his weekly Sunday notes column.

“Best educated guess? Bill Belichick will work hard to trade down in the first round, as this is the type of draft where the strength and value is in the 30-90 range,” Reiss wrote.

“So if the Patriots’ head coach can pull off something similar to 2020 — when Belichick shipped No. 23 to the Los Angeles Chargers in exchange for a high second-rounder (37) and third-rounder (71) — that might be viewed as ideal. The Patriots picked promising safety Kyle Dugger at 37 and used 71 in a different trade to move up for athletic linebacker Josh Uche.”

Of course, as Reiss mentioned later in his column, completing a trade is easier said than done. If other teams view the draft the same way as the Patriots (in that the value is in the 30-90 range), then it’d make it even tougher to trade down.

Reiss also shared who he believes could be top targets for the Patriots, including Lloyd, McDuffie, and Muma. He also has Michigan defensive back Daxton Hill, UConn defensive tackle Travis Jones, and Alabama wide receiver Jameson Williams on that list, too.

Get breaking news and analysis delivered to your inbox during football season.