Everything we know about Paxlovid, the COVID-19 pill that’s saving lives 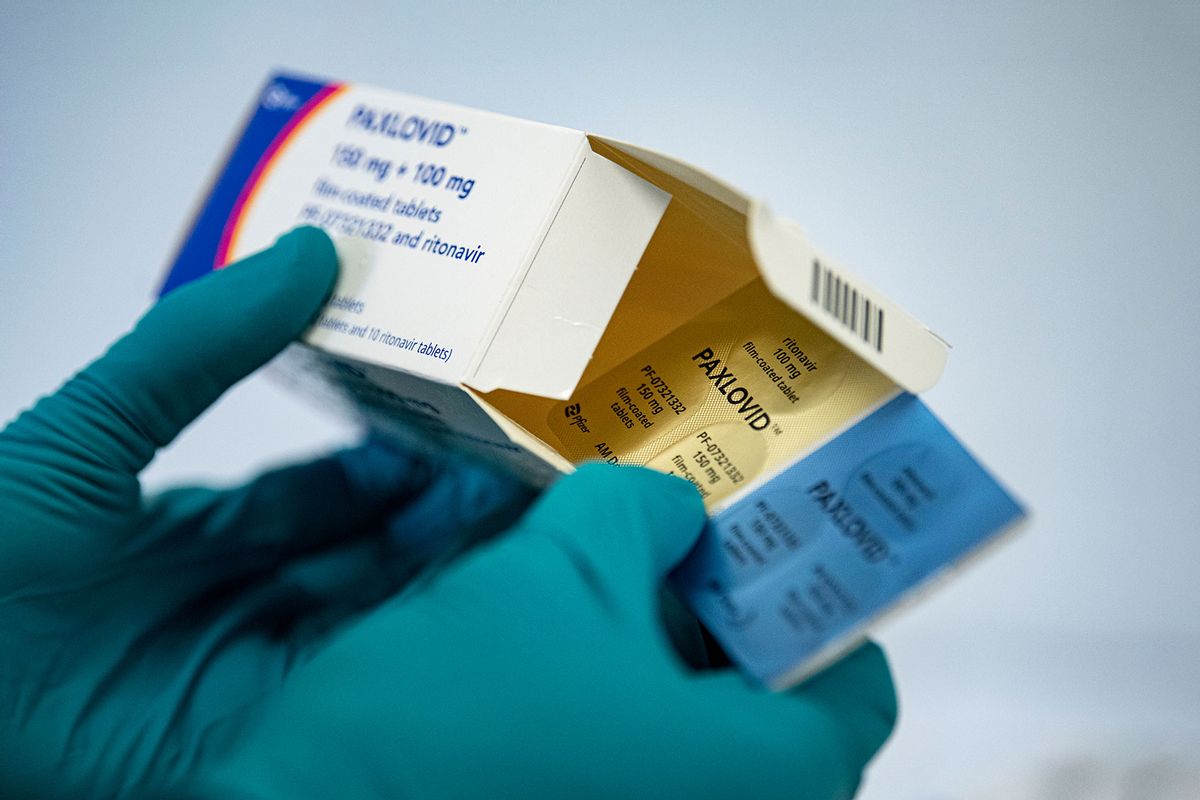 The COVID-19 vaccines may be waning in effectiveness as the virus mutates, but their fast production time and initial excellent efficacy rates mark them as a modern marvel of biotechnology.

Yet a less-appreciated but widely used COVID-19 drug, called Paxlovid, is perhaps equally impressive, a testament to human ingenuity.

You’ve perhaps heard of Paxlovid — an antiviral treatment manufactured by Pfizer that is very frequently given to COVID-19 patients, whether vaccinated or unvaccinated, when they show up at the hospital with difficult symptoms. It works very well at lowering death and hospitalization risk. It comes in a convenient pill form. And unlike the COVID-19 vaccine, Paxlovid has existed for years — in fact, it was brought to market almost twenty years ago, long before SARS-CoV-2 existed in human populations.

RELATED: Why the kids vaccine took so long

But as Paxlovid is increasingly doled out to Americans, the drug is gaining a popular reputation. Given the way that the pandemic has been marred by pseudoscience and social pressure to take drugs that don’t work, many Americans are rightly wondering whether Paxlovid truly is a miracle drug, as it is hyped, or if its effectiveness outweighs its occasional side effects.

We spoke to experts about how the drug works, what circumstances it might be prescribed for, and much more.

So what is Paxlovid, exactly?

Paxlovid is actually not one drug, but two generic medications that are packaged together: nirmatrelvir and ritonavir. The Food and Drug Administration (FDA) granted emergency use authorization of Paxlovid in December 2021 for anyone ages 12 and older who weighs at least 88 pounds. The drug is an oral antiviral pill that can be taken at home to help keep people who are high-risk for severe disease from getting so sick from COVID-19 that they need to be hospitalized.

“It is an antiviral treatment for use against COVID-19,” Dr. Amesh Adalja, a senior scholar at the Johns Hopkins Center and infectious disease doctor, told Salon. “It’s a pill that’s taken for five days and that works by interfering with the way the virus processes its proteins, and it’s been shown in clinical trials to be highly effective at preventing severe disease, hospitalization and death and high-risk individuals.”

In one clinical trial conducted in the second half of 2021 in unvaccinated individuals, the Pfizer-developed drug showed that it lowered the risk of hospitalization and death by 89 percent compared to a placebo group, without evident safety concerns.

Notably, Paxlovid isn’t new; the compound was identified in 2003 for treating Severe Acute Respiratory Syndrome (SARS) epidemic in China. SARS is closely related to SARS-CoV-2, as the names of the two viruses hint.

How does it work?

Technically, Paxlovid is made up of two medications: ritonavir, which is best known as an HIV/AIDS treatment, and nirmatrelvir, which keeps the SARS-CoV-2 protein from replicating. A combination of these pills inhibits the virus from infecting more cells in the body, which essentially stops the infection from progressing. People who take Paxlovid will consume three pills twice a day for five days; in total taking 30 pills.

Unlike some cold and flu drugs, Paxlovid is not an over-the-counter medication: you need a prescription from your physician to access it.

“Once you test positive, you need to be seen by a doctor, physician assistant or nurse practitioner in order to get a prescription written for you,” Adalja told Salon. “There are also places that are part of the federal government’s ‘Test to Treat’ plan where there might be a nurse practitioner or a doctor or physician assistant working at an urgent care clinic that might be housed within a pharmacy.”

Indeed, as Adalja mentioned, a person can visit COVID.gov to find the Test to Treat database, which will help you locate pharmacies that can test and prescribe antivirals on the spot. As part of the government program which purchased 20 million doses of the drug, Paxlovid is free at the moment. However, depending on a person’s health insurance status, there can be a price tag for a doctor’s visit if it’s not at a Test to Treat location.

Can anyone get Paxlovid?

The FDA provides physicians with a screening checklist for Paxlovid eligibility, but notes “the checklist is not required to prescribe Paxlovid under the EUA [emergency use authorization].”

However, Adalja notes that some are more likely to benefit from the treatment than others. First, a person needs to take it within the first five days of showing symptoms.

“You need to call fast — it’s not really going to work with people that are more than five days into their symptoms,” Adalja said. “And the data does really support its use for people who are at risk for severe disease as its primary benefit is to prevent hospitalization.”

In short, yes, there is much evidence that it works well. But, the devil is in the details: the jury is still out on if Paxlovid benefits everyone, or just those who are at high risk for severe disease.

Last week, Pfizer said in a press release that the results of one study showed that the drug failed to alleviate symptoms in people who weren’t high risk for severe disease. The press release also noted that there wasn’t a statistically significant reduction in hospitalizations and deaths in vaccinated patients with at least one risk factor for severe COVID-19. More data is needed to make a conclusion on who does and doesn’t benefit from this treatment, as these findings were only noted recently in a press release.

“The drug is about keeping high risk people out of the hospital and the clinical trials data supports this, but we don’t have good data about its effectiveness in patients who have no risk factors for severe disease,” Adalja said. “That may come over time, and I think they need to do more studies to understand if there are benefits to low risk people.”

Are there side effects?

If you’re worried about side effects, you may have heard stories about the side effect informally dubbed “Paxlovid mouth,” in which one’s mouth and saliva tastes a bit strange for a little while after taking the drug.

Indeed, according to the FDA, potential side effects are “impaired sense of taste, diarrhea, high blood pressure and muscle aches.” But as The Atlantic reported, “Paxolovid mouth is real” and “gross.” For some people, the taste is a metallic one. For others, it’s like “grapefruit juice mixed with soap.”

The medical term for this condition is dysgeusia, which  5.6 percent of patients reported in Pfizer’s clinical trials.

And then there’s the so-called “Paxlovid rebound,” which is when a person’s symptoms return after the treatment. According to a study published in Clinical Infectious Diseases of 483 high-risk patients treated with Paxlovid, four people (0.8%) experienced a rebound of symptoms.

“There are a lot of anecdotal reports out there, so this is something that needs a lot more study to be able to know, but I think it’s probably a real phenomenon,” Adalja said. “What Paxlovid’s role is in this, and what the mechanism is for this rebound, is what I think is really important to understand.”

Adalja said that while rebound patients may still be contagious, anecdotally they seem to do OK in warding off the virus despite a rebound.

More recently, a study published in Clinical Infectious Diseases suggests rebound symptoms could have to do with an “insufficient” exposure to the drug.

“Our main concern was that the coronavirus might be developing resistance to Paxlovid, so to find that was not the case was a huge relief,” said author Aaron F. Carlin, MD, PhD, assistant professor at UC San Diego School of Medicine, in a press release. Instead, the researchers suspect that not enough of the drug was getting to the infected cells to stop the virus from replicating.

Can you take Paxlovid if you’re pregnant?

Yes. But like many drugs, it hasn’t been tested on pregnant people directly.

“There is no experience treating pregnant women or breastfeeding mothers with Paxlovid,” the FDA states. “For a mother and unborn baby, the benefit of taking Paxlovid may be greater than the risk from the treatment. If you are pregnant, discuss your options and specific situation with your healthcare provider

Notably, the FDA warns that Paxlovid might affect how your hormonal birth control works.

Can you take Paxlovid if you are reinfected?

“I wouldn’t re-treat somebody who has a rebound, but you can take it as many times as you want,” Adalja said, adding that the difference between a relapse and reinfection is time. An infection after 90 days is considered a reinfection if a person tests positive 90 days after their first positive test.

5 Health Risks You Face Due to Lack of Sleep