Ex-cop accused of catfishing teen, then killing her family in California – National 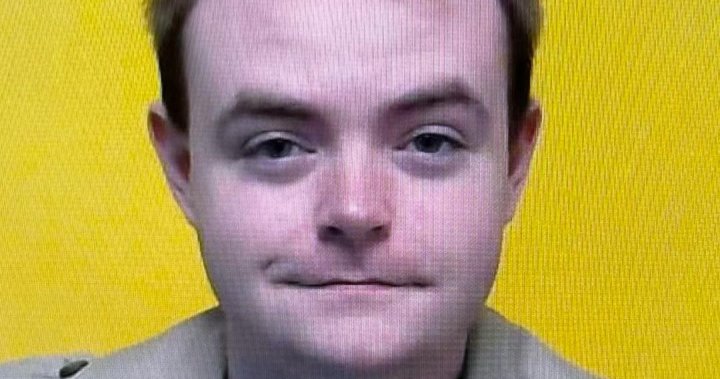 A former police officer from Virginia was killed in a shootout with law enforcement after he allegedly killed the mother and grandparents of a 15-year-old girl he met online, California police said.

Investigators believe that Austin Lee Edwards, 28, posed as a teenager to engage in an online relationship with the girl before driving from Virginia to the southern California city of Riverside, where he abducted her, killing her family in the process.

Edwards was a former trooper for the Virginia State Police and had recently been hired by the Washington County Sheriff’s Office in the state — though it’s unclear if he was a sworn officer at the time of the killings.

According to a press release from the Riverside Police Department, officers responded to a 911 call at 11:08 a.m. on Nov. 25 about a young girl who appeared to be distressed while getting into a red Kia Soul with a man.

When officers were responding, 911 operators also began receiving calls about a structure fire just a few doors down from where the previous call had come in.

Firefighters arrived at the scene first and entered the blazing residence to find three dead bodies inside. Firefighters pulled the bodies from the fire and the victims were later identified as Mark Winek, 69, his wife Sharie Winek, 65, and their daughter Brooke Winek, 38.

The exact cause of their deaths is still pending, police said, as is the origin of the house fire, though a preliminary investigation indicates that it was intentionally ignited. Firefighters were able to extinguish the fire.

Investigators determined that the girl described in the initial 911 call was also a resident of the house where the fire and homicides occurred, and relayed information about the suspect’s vehicle to allied law enforcement agencies to locate her.

Several hours later, Edwards was found driving with the teen by the San Bernadino County Sheriff’s Department in the Kelso area. A gunfight broke out between Edwards and the deputies, resulting in his death.

Texas family reunites with daughter who went missing 51 years ago

Police said the “teen was unharmed and later placed into protective custody of the Riverside County Department of Public Social Services.”

Detectives believe that Edwards met the young girl by catfishing her, a “common form of online deception,” police explained, “where someone pretends to be a different person than they actually are.”

Edwards is believed to have gained the girl’s trust enough to obtain her personal information, then “travelled from Virginia to Riverside where he parked his vehicle in a neighbour’s driveway and walked to the teen’s home,” police wrote.

“At some point, he murdered the teen’s grandfather, grandmother, and mother before walking back to his vehicle with the teen and leaving,” the press release added.

In a statement Monday, the Winek family thanked people for their support “during this horrific time in our lives. Mark, Sharie and Brooke were loving people who didn’t deserve this tragedy.”

Brooke Winek was described by a relative as a “beloved single mother with the biggest heart,” according to NBC.

A spokesperson for the Virginia State Police said Edwards resigned from the force on Oct. 28 but did not specify the reasons. Washington County Sheriff Blake Andis said Edwards was hired by the department in early November and was in the process of being assigned to a patrol division.

“It is shocking and sad to the entire law enforcement community that such an evil and wicked person could infiltrate law enforcement while concealing his true identity as a computer predator and murderer,” Andis said, as reported by NBC.

Riverside police Chief Larry Gonzalez shared in Andis’ horror of the tragic deaths, saying in a press release, “Our hearts go out to the Winek family and their loved ones during this time of tremendous grief, as this is a tragedy for all Riversiders.”

“This is yet another horrific reminder of the predators existing online who prey on our children,” he added.

1:32
Family found dead after being kidnapped at gunpoint in California

No 10 admits ‘escalatory’ risk in sending fighter jets to Ukraine