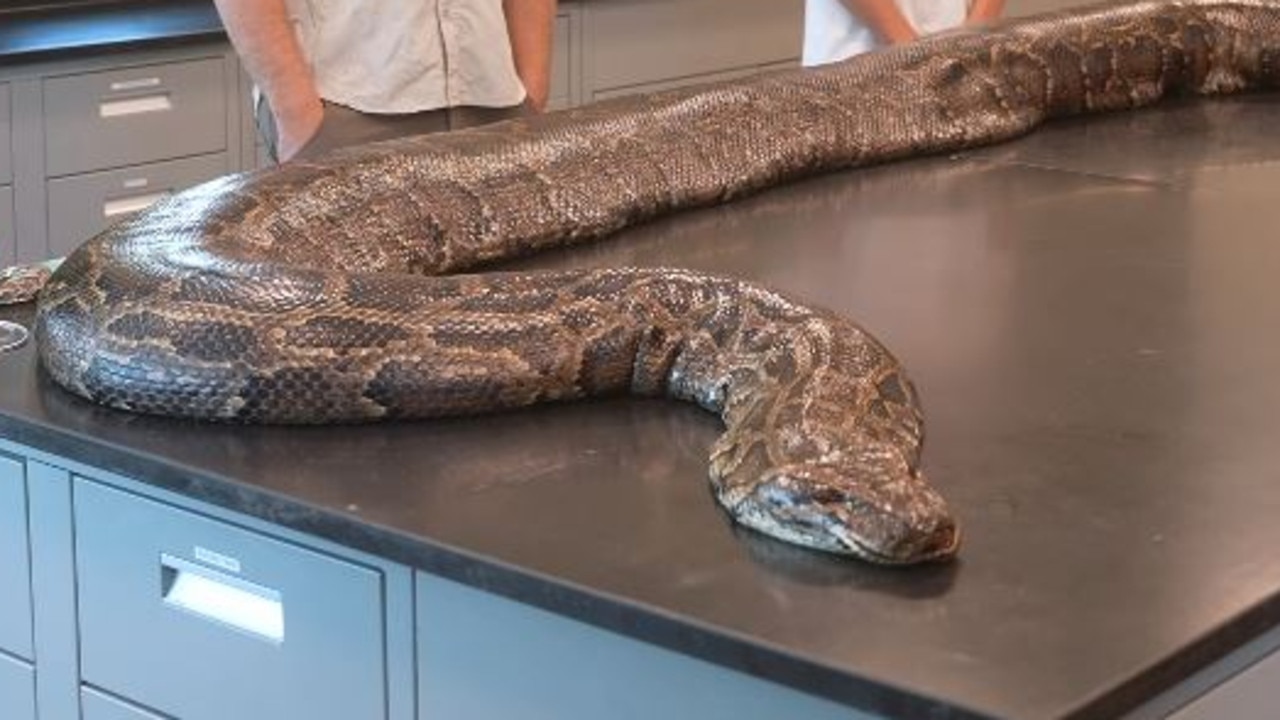 Researchers have been left shocked after discovering a five metre snake that weighs an enormous 97kg in the Everglades region of Florida.

A record-breaking find has come slithering out of Naples, Florida.

A team of researchers at the Conservancy of Southwest Florida captured a 97kg, 5.3 metre Burmese python at the beginning of the new year.

Ian Bartoszek, a wildlife biologist and python project manager with Conservancy of Southwest Florida, told Fox News it was a major find for the Everglades region, given that the python is the heaviest on record.

“This is the largest snake we caught,” he said.

“And to my knowledge, this is the largest by weight ever caught in Florida in the invasive range.”

Bartoszek said he “always wondered” if he and his team — including biologist Ian Easterling and intern Kyle Findley — would catch a snake over 90kg.

Then they stumbled on this female python — which exceeded all their expectations.

“We put it on the scale, we looked at the number and I think there was collective disbelief,” he said. “There was some cackling in the background — like, ‘No way.’”

“We knew she was big,” he said. “I guess we just didn’t realise she was that big.”

The biologist remembered the initial struggle of wrestling the massive snake.

He detailed that she “threw her weight around” and even coiled the end of her tail into a “fist” and took a swipe at Findley.

“[She] missed him,” Bartoszek said.

“But Ian Easterling was on the other receiving end — and she punched him in the face with her tail to let him know about it. So, that was fun.”

The biologists eventually dragged the python out of the woods and humanely euthanised her so that can be studied for future scientific research and preserved for educational outreach.

“She really is a next-level snake,” he said. “We have a lot of respect for these animals.”

Not only did this Burmese python break records for weight, but the snake also had a total of 122 developing eggs — which Bartoszek said is the “most by far” in the non-native range.

“That was a record in itself.”

Hoof core remains were recovered from the snake’s innards — indicating that she most likely ate an adult white tail deer as her last meal.

This specific finding is exactly why researchers have sought to capture and put down the invasive species, since their appetite for South Florida wildlife is putting the entire ecosystem in danger.

“Research partners at the University of Florida have documented 24 species of mammal, 47 species of bird and two reptile species from the bellies of Burmese pythons across the invaded range,” the biologist said.

“So that is the definition of a generalist apex predator.”

Bartoszek said it was “not surprising” to find these remains, since Burmese pythons are big game hunters; but white tail deer are also the primary prey source for the Florida panther — an endangered species.

“The question I usually pose is, ‘What do you think it took in native wildlife to make a snake that weighs 250 pounds?’”

“She could be likely over 15 years of age, maybe even over 20 … and she’s been out there on the landscape being naughty for all that time,” he said.

The invasive species is native to Southeast Asia; there, they’ve been given a vulnerable status, as they’re often overharvested for meat, medicine and leather.

So how did they get to the Everglades? Bartoszek said the reasons include the intentional release of pythons, escaped pets and/or severe weather circumstances that are wiping out breeding facilities.

Bartoszek said that for the last 10 years — of the 20 he’s been with the conservancy — his team has conducted a radio telemetry study of invasive Burmese pythons in the area.

This study has offered a “tremendous amount” of information on snake behaviour. Bartoszek said they’ve used this against the animal to remove more than 11,700kg of pythons — more than 1000 snakes in an area that’s less than 258 square kilometres.

The team has been able to track down specifically reproductive female pythons with an approach called scout snake methodology.

This method requires the surgical implantation of radio transmitters into male pythons that have been spotted with females — which then, as Bartoszek described, turns into a one-sided game of “hide and seek.”

“They’d be 0 per cent detectable without using a python to find a python,” he said.

“We have an army of snakes working with us.”

“I always say I’m more afraid of driving here on the roads during [breeding] season than I am of wrestling with the Burmese python.”

For more on this story, visit natgeo.com.

This story was published by Fox News and was reproduced with permission.