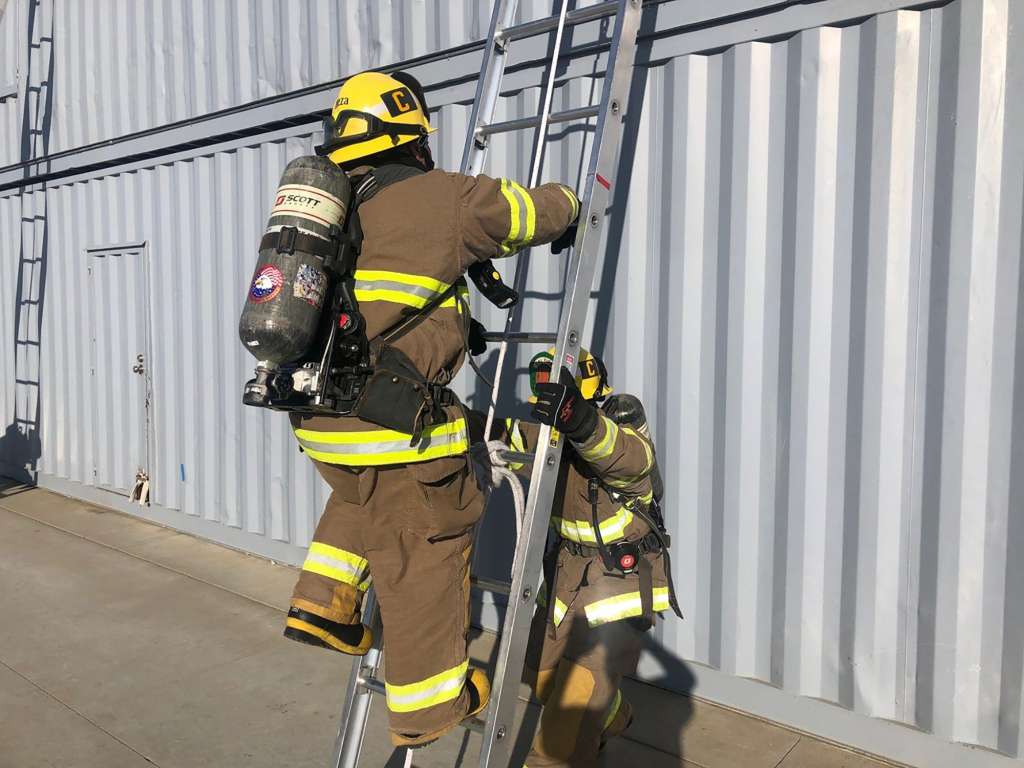 “The worst for me was having that feeling of letting my family down,” said the 40-year-old married father with four children. “That was the hardest part for me. I’m a provider.”

Reyna and his mentors are confident he will soon earn a good starting salary as a firefighter, with excellent benefits when he leaves the VTC.

Reyna pleaded guilty to voluntary manslaughter for the 2005 shooting death of Daniel Rodriguez in the San Diego city of Alpine. The prosecutor in the case, David Grapilon, told CNN Reyna was not the trigger man, and he has no problem with Reyna, who passed rigorous state prison rules on behavior to work in an inmate camp, becoming a firefighter.

“I’d rather see inmates do something productive, like work in the fire camps, instead of sit inside all day watching television,” said the San Diego County Deputy District Attorney. “And there are safeguards. The inmate firefighter program has strict rules on who is accepted.”

Reyna is now part of a growing list of former inmates who will or have been hired full-time by fire departments just California endures massive wildland infernos caused by the climate crisis. CalFire reports the eight largest blazes in state history based on acreage, all occurred since 2017.

“We are in some unprecedented times here in California,” said Jeremy Brant, CalFire battalion chief. “We see the environment change, the increase in fire behavior and large growth of fires. The fire seasons are getting longer.”

Brant believes the center he runs with CalFire division chief Mike Salas can help meet the demand for more firefighters in California. The VTC, started in 2018, was developed to take ex-convicts who battled fires as prison camp members and prepare them for a career as firefighters.

CalFire estimates since 2018, 229 former inmates enrolled in VTC. Of those, 136 got jobs, the majority with CalFire, and 56 are in camp now.

Before being released, inmates can learn firefighting skills in other camps run by the state’s Conservation Camp program. The California Department of Corrections and Rehabilitation reports depending on skill level, while still incarcerated, firefighters earn between $2.90 and $5.12 a day while in camp. If assigned to an active emergency, CalFire pays prisoners an extra dollar per hour. The California code says the pay for all prisoners, including those working in kitchens or laundry rooms, ranges from 8 cents to 37 cents per hour. Prison camp is considered a perk, reserved for inmates who demonstrated good behavior.

Getting into the VTC program after serving their time, requires the participants be carefully screened, had minimum custody status in prison, and are recommended are by a prison camp chief.

The training center runs a free, 18-month program allowing the felons to hone the firefighting skills they learned in the Conservation Camp program. The former inmates stay in the Camarillo barracks Monday through Friday.

It’s not just outside firefighting drills or classroom instruction on inferno behavior officials think drives the ex-cons to success. The VTC offers extensive mental health as well as addiction counseling in coordination with the California Department of Parole, the California Conservation Corps and the Anti-Recidivism Coalition. Salas says the program is funded by CalFire, and California Prisons system.

“At VTC we create an environment of mentoring, where they can be safe,” Brant explained. “Too many guys get out of prison; reoffend because they get around old friends, old gang members whatever.”

California governor Gavin Newsom cleared roadblocks to inmates becoming fire firefighters with the signing of a bill on an ashy bench surrounded by burned trees in September 2020.

“Inmates who have stood on the front lines, battling historic fires should not be denied the right to later become a professional firefighter,” Newsom said.

The bill also gave courts the power to expunge inmate firefighters’ criminal records, which had often made it more difficult for former inmates to get hired. The courts can wipe out camp prisoners guilty or nolo contendere pleas, and a plea of not guilty can be entered, or verdicts of guilt to be set aside.

One of the first former camp inmates to have his record expunged is Jose Santana, who trained at VTC, completed the program in the spring of 2021 and got hired soon after by the CalFire Tulare Station Unit.

Santana served three in years in prison for a crime he apologizes for repeatedly and to this day. The ex-convict says while drunk on Jamison whiskey, high on meth and not sleeping for five days, he smashed a liquor bottle into the head of his then girlfriend.

Santana served three years of a five-year sentence, He described massive brawls in Wasco Prison and the Sierra Corrections Center with inmates beating each other with broom handles, kicking each other in the head. The guards’ smoke canisters tossed to break up the melees, cast a gray haze.

“A war zone,” said Santana. “I had to get out of there. I heard of Mountain Home, a fire camp for inmates. Maybe I could do it.”

Santana, per his chiefs, excelled at Mountain Home, which helped propel him to the firefighter job he says makes his two sons proud. He heard one of his boys brag on a headset while playing with others in Fortnight.

“‘Yeah, well my dad does a little something,’ ” Santana recounted his son saying. “‘He fights fires!’ “

As fires roared through California in 2021, Santana racked up experience and overtime dollars.

On a rare down day during the scorching fire season, Santana passed out CalFire stickers at a parade in Tulare, dressed in navy-blue attire.

“It just felt so good, wearing that uniform, giving back to this great community,” Santana said. “I was smiling, thinking none of these people would ever know that I used to wear prison orange.”

Santana told CNN he will soon complete an Emergency Medical Technician program at Allan Hancock College in Santa Maria and will take on a grater leadership role with CalFire.

There is no VTC type facility or other training center for California’s female ex-convict firefighters, but Salas predicts the state agencies will establish an all-female version of the VTC sooner rather than later.

John Reyna can’t predict if he will wind up full-time at barracks somewhere with CalFire. He’s applied to several CalFire jobs and his dream is in San Diego County.

Standing on the VTC grounds where he trained, sweated, marched and barked orders eventually as a company leader, he became reflective.

“I keep reminding myself, never forget what happened,” he said. “Never forget the people you hurt and their families. Start doing good for everybody around you and pay back. Pay back those families. That’s my way of giving back to that family that I hurt, is by doing good deeds.”