THE fight to contain polio infections has started in the UK as health chiefs launch an investigation to find the source of the illness.

Experts have detected the bug in sewage samples in London and have urged people to check their jabs are up to date.

The UK Health Security Agency (UKHSA) has launched an investigation to protect the public from the spread.

In the report, experts warned that the virus had been detected in samples from the London Beckon Sewage Treatment Works as early as February.

Since then, the virus has continued to evolve and is now classed as a  ‘vaccine-derived’ poliovirus type 2 (VDPV2). 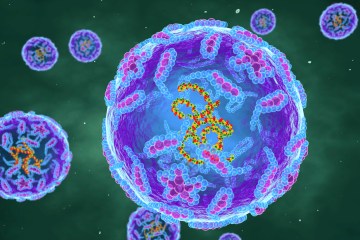 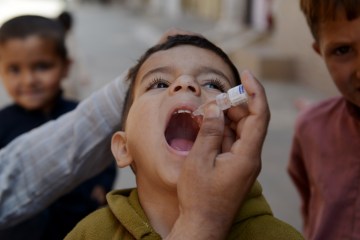 Medics said that on rare occasions, this can cause serious illness such as paralysis in those who are not fully vaccinated.

The paper, published yesterday stated: “The detection of a VDPV2 suggests it is likely there has been some spread between closely-linked individuals in North and East London and that they are now shedding the type 2 poliovirus strain in their faeces.

“The virus has only been detected in sewage samples and no associated cases of paralysis have been reported – but investigations will aim to establish if any community transmission is occurring.”

Head of the vaccine epidemiology research group at Imperial College London, Prof Nicholas Grassly said there is concern that the virus may be circulating locally in London and could spread more widely.

Medics yesterday warned that the emergence of polio in the UK reminds us that it has not yet been eradicated.

The last case of polio being contracted in Britain was in 1984 and the country was declared polio-free in 2003.

Before a vaccine was introduced in the 1950s, epidemics would result in thousands of people being paralysed annually and hundreds of deaths.

Experts believe a traveller – likely from Pakistan, Afghanistan or Nigeria – shed the virus in their stools after being given the oral polio inoculation.

But the bug has now spread to others after mutating, with the same strain being repeatedly detected in sewage samples.

Despite clear evidence of an outbreak, no cases have yet come forward.

What are the 6 signs of polio you need to know

The majority of people who get infected with poliovirus will not have any visible symptoms.

About one in four people with poliovirus infection will have flu-like symptoms that may include:

Symptoms usually last anywhere between two to 10 days before they go away on their own.

In very rare cases, polio can cause difficulty using your muscles, usually in the legs.

This is not usually permanent and movement should slowly return over the next few weeks or months.

And officials insist the overall risk to the public remains very low.

Dr Vanessa Saliba, Consultant Epidemiologist at UKHSA said: “Vaccine-derived poliovirus is rare and the risk to the public overall is extremely low.

“Vaccine-derived poliovirus has the potential to spread, particularly in communities where vaccine uptake is lower.

“On rare occasions it can cause paralysis in people who are not fully vaccinated so if you or your child are not up to date with your polio vaccinations it’s important you contact your GP to catch up or if unsure check your red book.”

Polio is an infectious disease that can spread from person to person and most commonly affects children under the age of five.

The history of polio – everything you need to know

Polio is a condition that mainly affects children under the age of five.

Data from previous outbreaks shows that one in 200 infections leads to irreversible paralysis.

Of those five to ten per cent die.

Some of the first evidence of polio comes from Ancient Egypt.

A tablet from a stone carving in 1403-1365 BC showed a priest with characteristics of polio.

1798: It was given its first clinical description by the British physician Michael Underwood

1840: Was recognised as a condition by Jakob Heine

1840 – 1900: In the UK polio was a major health crisis in the Victorian England and there were also major incidents in Europe.

1928: Philip Drinker and Louie Shaw develop the ‘iron lung’ technology to help have children ravaged by the condition. Kids would spend two weeks in the device, which has today been made redundant by vaccinations.

1950: The illness wreaked havoc in the UK at this time. The country was rocked by a series of polio epidemics, with as many as 8,000 people suffering paralytic poliomyelitis.

1953: Cases started to fall as jabs were rolled out.

1961: The oral polio vaccine was rolled out. Despite the advances, at this time there were still 79 deaths in the UK and 707 acute cases.

1962: Brits started to use the oral vaccine.

1988: Polio had disappeared from the UK, US and much of Europe but was still around in more than 125 counties.

1997: Last wild cases in the Western Pacific region are recorded

2011: China returned to its polio-free status

2012: At this point, polio is still endemic in Afghanistan, Nigeria, Pakistan and India.

2015: Polio endemic in Pakistan and Afghanistan

2020: Type 1 was only in circulation in Pakistan and Afghanistan, while type 2 and 3 have been eliminated for over a decade.

The disease attacks the nervous system and in some extreme cases can lead to paralysis.

Polio is very contagious, and a person can transmit it even when they aren’t sick.

In the UK, the polio vaccine is part of the NHS routine childhood vaccination schedule.

However, one in ten kids in London aged five are not fully vaccinated against the bug.

Jane Clegg, Chief nurse for the NHS in London, said: “The majority of Londoners are fully protected against Polio and won’t need to take any further action, but the NHS will begin reaching out to parents of children aged under five in London who are not up-to-date with their Polio vaccinations to invite them to get protected.

“Meanwhile, parents can also check their child’s vaccination status in their Red Book and people should contact their GP Practice to book a vaccination should they or their child not be fully up-to-date.”

‘Not Taking Anything for Granted’ as Critics Howl – NBC Chicago

Breast cancer spreads ‘more quickly through the body at night’

NHS may cancel appointments and reduce visiting times over Covid and flu ‘twindemic’,…