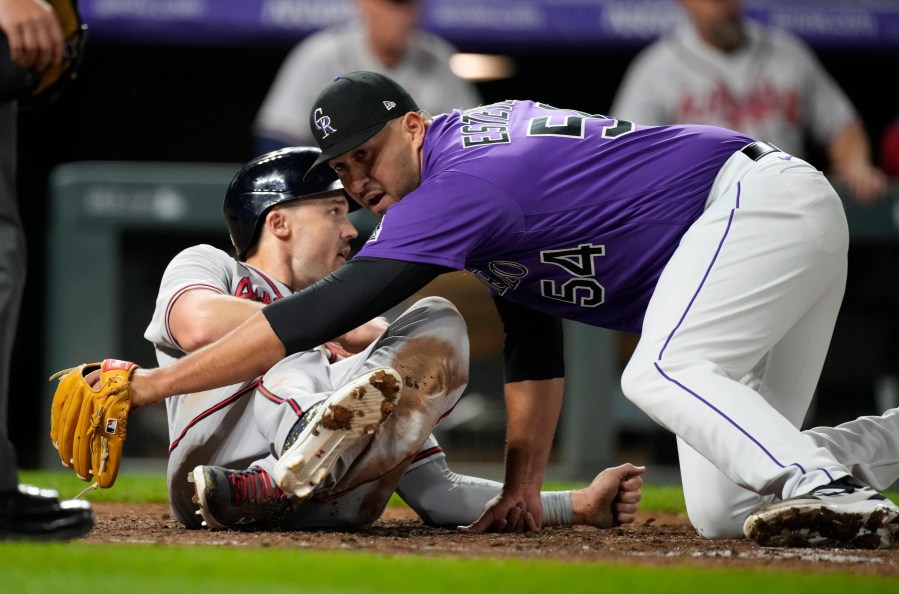 In only the second game in Coors Field history to be scoreless after nine innings, Carlos Estevez (1-2) walked and hit a batter to load the bases in the 10th. His wild pitch allowed automatic runner Adam Duvall to score.

Olson then hit a liner to left field off Lucas Gilbreath, making a winner of A.J. Minter (1-0), who worked the ninth. Kenley Jansen gave up an RBI single to Yonathan Daza before earning his 13th save for the up-and-down Braves, who moved within a game of .500.

Fried used a mix of pitches that kept the Rockies off balance. He allowed just two hits and didn’t walk a batter until there was one out in the eighth.

”Everything was just nails. I mean slider, change, curve, his fastball. I saw him getting after it a couple innings like he was emptying the tank,” Braves manager Brian Snitker said. ”You expect to win the game when he pitches.”

The lefty set down his first nine batters. Connor Joe led off the fourth with an opposite-field ground single to extend his on-base streak to 30 games. Fried worked around Randal Grichuk’s leadoff double in the sixth and helped snap Brendan Rodgers’ 20-game hitting streak.

Fried, who had a major league-high two shutouts in 2021 and was the winning pitcher in Atlanta’s World Series-clinching victory, threw 102 pitches and struck out four.

”I felt like I had a little bit of everything working,” he said.

The loss spoiled a striking turnaround through nine innings for Colorado’s struggling pitching, as Chad Kuhl and three relievers combined to hold the defending World Series champions off the scoreboard.

The Rockies entered having allowed 39 runs and 51 hits in three games over two days. As manager Bud Black faced questions about his coaching staff before the game, Colorado was in danger of becoming the first team since the 1928 Phillies to give up 12 or more runs in four straight games.

Kuhl got off to a rough start, walking two and allowing two singles in the first. But the Braves didn’t score thanks to second baseman Rodgers throwing out Ronald Acuna Jr. at home on a first-and-third steal attempt.

Kuhl settled down from there. He was at 60 pitches through three innings but needed just 28 more to get through six. Dansby Swanson had three of the five hits allowed by Kuhl, who has given up only three runs in his past three starts.

”Fastball command was key. I felt like I was attacking and getting strike one a lot,” Kuhl said. ”When you throw a lot of pitches through one or two innings, you’re thinking get through five. But I was able to get through six.”

Alex Colome, Tyler Kinley and Daniel Bard each pitched a shutout inning, making it the first scoreless game to go to the 10th in Denver since Sept. 14, 2008, when the Rockies beat the Dodgers in a game started by Hall of Famer Greg Maddux for Los Angeles.

”Being able to pitch here is a challenge,” Fried said. ”I just wanted to be myself, pitch my game, move the ball around and change speeds.”

Braves: Acuna, still getting to full strength following right ACL surgery, started in right. He didn’t play Wednesday and was the DH on Thursday.

Rockies: Daza (elbow) was in the lineup after not starting the past two games. … Black confirmed two prospects, 3B Colton Welker and LHP Ryan Rolison, need season-ending shoulder surgery.

Braves 2B Ozzie Albies didn’t start in what Snitker said was simply a day off. Albies later pinch-hit and has played in all 53 games this season.

Black said the team is not considering replacing pitching coach Darryl Scott despite a 5.34 team ERA entering Friday, second-worst in the majors.

Duvall became the third Braves player to have an in-season salary arbitration hearing, an oddity caused by the lockout. Duvall, who went 0 for 4, is asking for $10,275,000 this season. The Braves countered with $9,275,000.

Relief pitcher Luke Jackson and 3B Austin Riley have lost their cases. Fried’s case will be heard later this month.

”All of our guys have handled it like the professionals they are,” Snitker said.

Daza dropped a fly ball to center in the sixth, giving the Rockies a major league-high 43 errors.