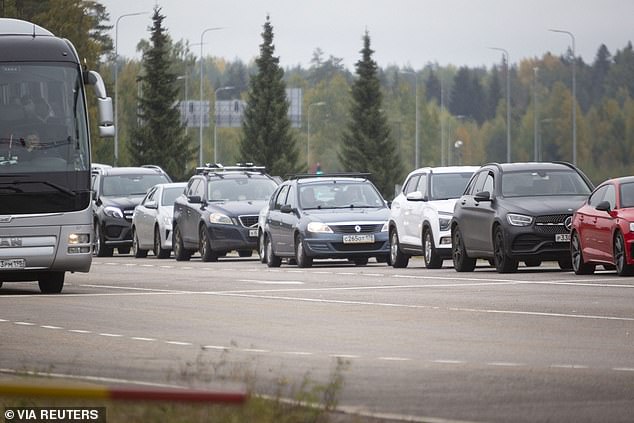 Finland is closing its borders to Russian tourists from midnight tonight after a huge influx of military aged men fled the country after Putin’s mobilisation order.

Passenger traffic on the border will be significantly limited, with Russian civilians on tourist visas no longer allowed to enter the Nordic country.

Foreign minister Pekka Haavisto said: ‘The decision in principle aims to completely prevent Russian tourism to Finland and the related transit through Finland.’

The government justified its decision by saying that continued arrivals of Russian tourists in Finland is endangering the country’s international relations without specifying further.

Entry for family visits, as well as for work and studies, will still be permitted, he added. 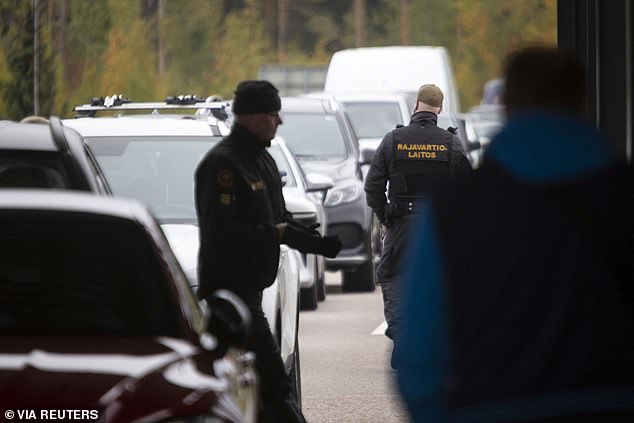 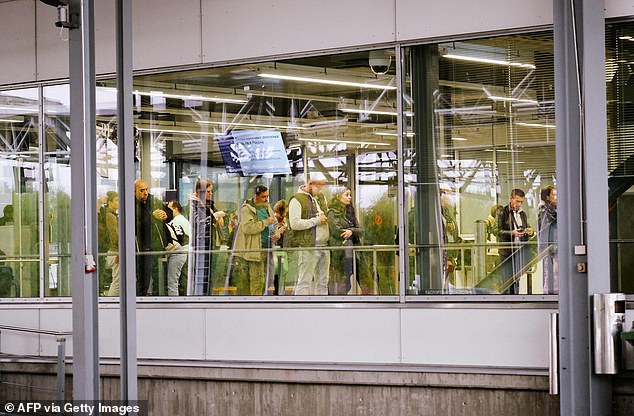 Fearing the border may close ‘forever’ after the Russian President’s mobilisation order for the war in Ukraine, Russians are rushing to flee across Finland’s Vaalimaa border crossing

Haavisto said the mobilisation order had a ‘significant impact’ on his decision.

At the start of the month, Finland slashed the number of visas – including for tourism purposes – issued to Russian citizens.

Only a tenth of the usual number of visas were issued in a move seen as a show of solidarity with Ukraine.

Around 200,000 Russians are believed to have fled the country in the past week, rushing to Georgia, Finland, Kazakhstan and Mongolia to escape a potential call-up to the front lines of the war. 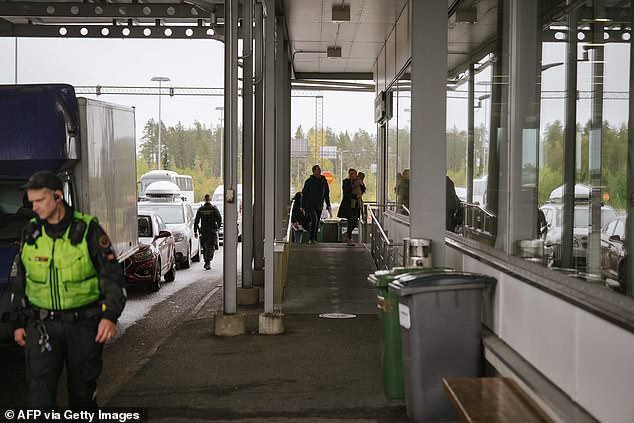 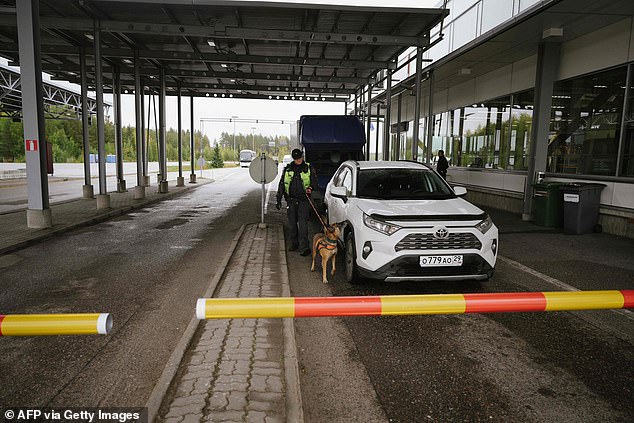 At the start of the month, Finland slashed the number of visas – including for tourism purposes – issued to Russian citizens

The Finnish Border Guard agency said over 43,000 arrived in the same period. Media reports also said another 3,000 Russians entered Mongolia, which also shares a border with the country.

The number who have fled now likely exceeds the number of troops in Putin’s original invasion forces, military intelligence suggests.

The British Ministry of Defence said in its daily update today: ‘In the seven days since President Putin announced the ‘partial mobilisation’ there has been a considerable exodus of Russians seeking to evade call-up.

‘Whilst exact numbers are unclear, it likely exceeds the size of the total invasion force Russia fielded in February 2022.

‘The better off and well educated are over-represented amongst those attempting to leave Russia. 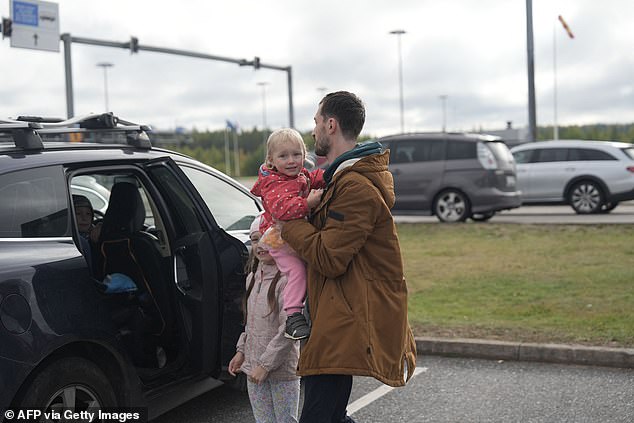 Viktor Zakarov, a 35-year-old scientist from Saint Petersburg, holds one of his three children after passing the passport check 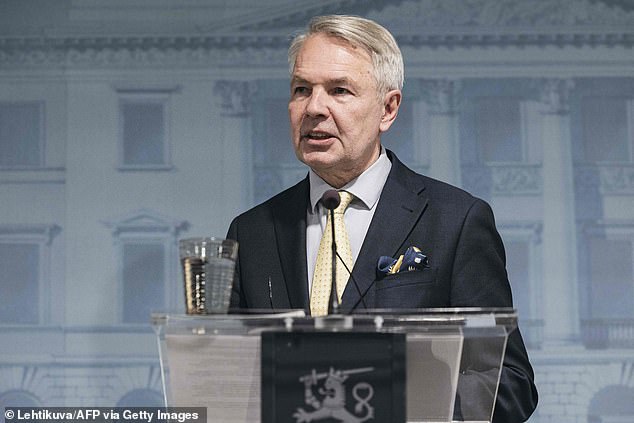 Foreign minister Pekka Haavisto said: ‘The decision in principle aims to completely prevent Russian tourism to Finland and the related transit through Finland’

‘When combined with those reservists who are being mobilised, the domestic economic impact of reduced availability of labour and the acceleration of ‘brain drain’ is likely to become increasingly significant.’

The mass exodus has created miles-long lines for days at some borders, and local Russian authorities on one area along the border with Georgia said they would start providing food, water, warming stations and other aid to those in line.

Moscow also reportedly set up draft offices at borders to intercept some of those trying to leave.

Fearing the border may close ‘forever’, Russians have in the past week been rushing to flee across Finland’s Vaalimaa crossing.

‘Many people are afraid,’ says Oleg, a bar owner from Moscow who crossed over to the Finnish side. 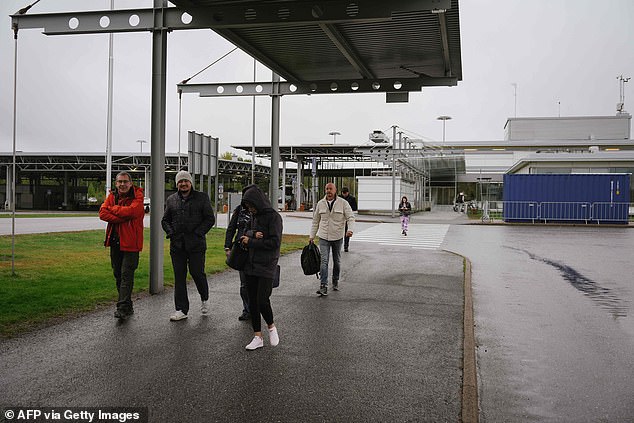 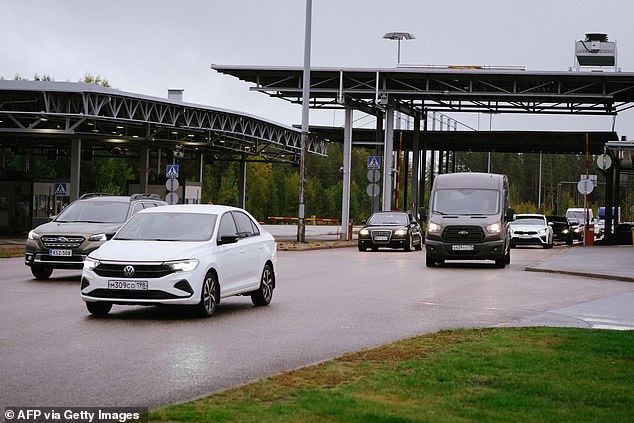 Passenger traffic on the border will be significantly limited, with Russian civilians on tourist visas no longer allowed to enter the Nordic country

He fears the border might ‘close forever’ and Russians ‘will live in a totalitarian state where they can’t do anything at all’.

‘I live in a country which sinks a little more every day,’ he explains.

Finland said on Monday that more Russians came to the country over the weekend than any other weekend so far this year.

Viktor Zakharov – who arrived in Finland with his partner and their three children – says he has five friends who have left Russia since the mobilisation.

While the 35-year-old scientist from Saint Petersburg does not have a military background and is not part of the mobilisation, he is worried the situation might change.

‘If you are not fit today you can be tomorrow and be in the army,’ he says, as the travellers wait patiently for their vehicles to be inspected by Finnish border guards.

Zakharov – who is headed for Israel – drove his fully packed SUV through the Russian side in 30 minutes and then spent one-and-a-half hours making his way through the Finnish crossing. 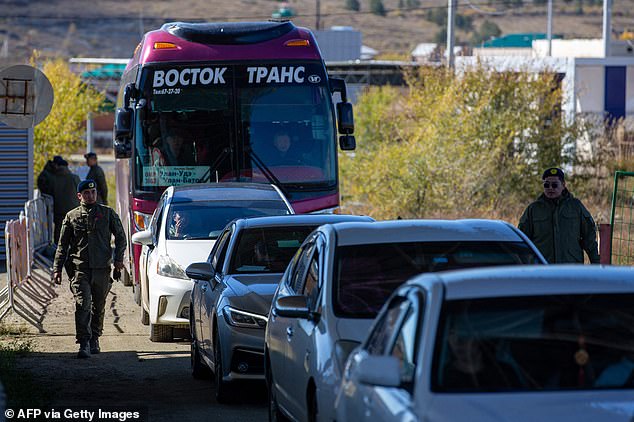 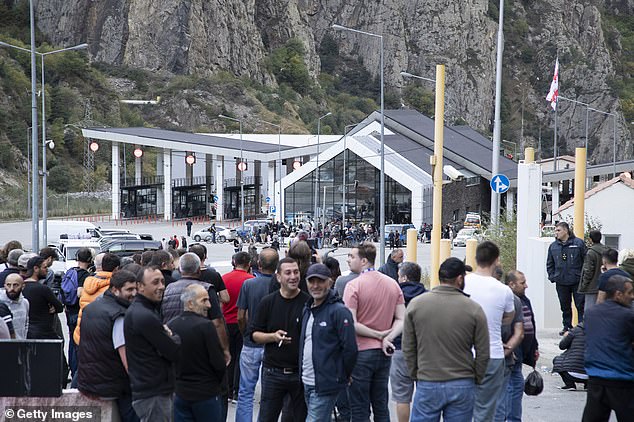 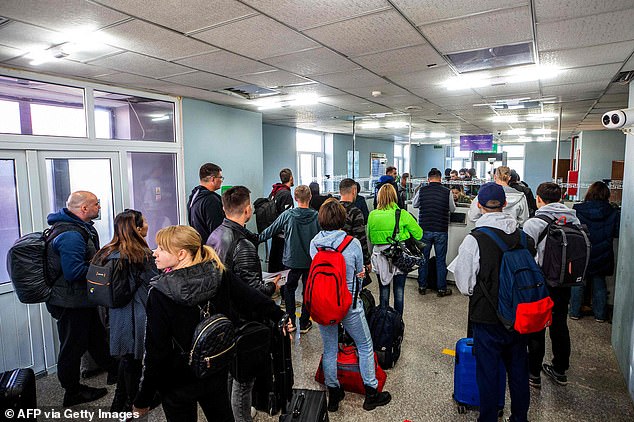 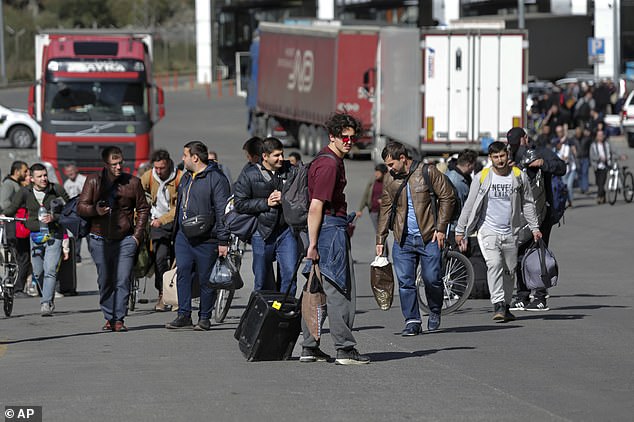 A group of Russians walk after crossing the border at Verkhny Lars between Georgia and Russia in Georgia, Tuesday, Sept. 27, 2022 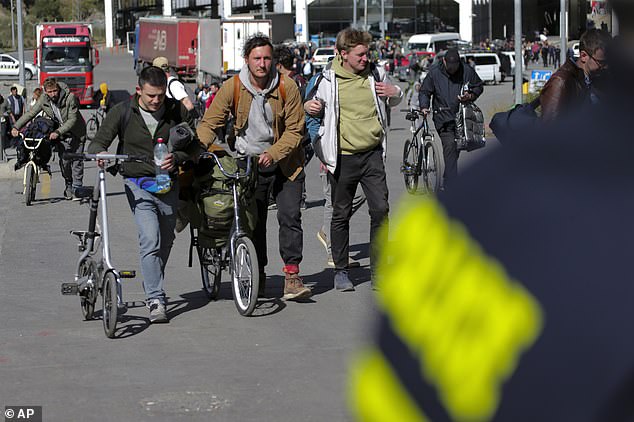 A group of Russian men walk with their bicycles after crossing the border at Verkhny Lars between Georgia and Russia in Georgia, Tuesday, Sept. 27, 2022. Long lines of vehicles have formed at a border crossing between Russia’s North Ossetia region and Georgia after Moscow announced a partial military mobilisation 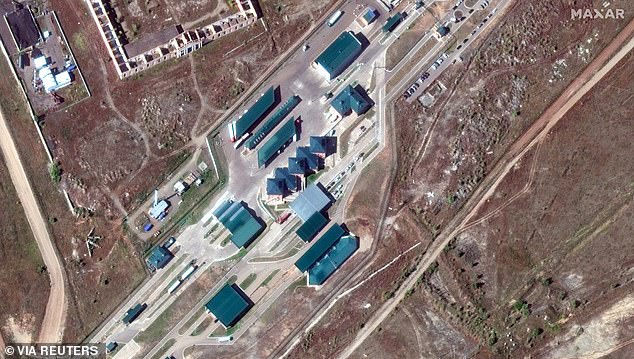 Despite being in Finland, ‘the feeling of freedom has not come yet because of the sleepless nights and the packing, and to be honest it’s not clear yet,’ he explains as he hands pieces of candy to his children.

State employee Vadim arrived by bus. He left his mother in charge of looking after his apartment in Moscow, and hopes to return soon.

‘I have heard about many cases of young men being deported and not being able to cross because of the mobilisation,’ he says.

‘I can’t say I’m happy, I can’t with the world’s situation.’

In July, Finland passed new amendments to its Border Guard Act to facilitate the construction of sturdier fences on the Nordic country’s 800-mile eastern border with Russia.

As it stands, Finland’s borders are secured primarily with light wooden fences, mainly designed to stop livestock from wandering to the wrong side.

On Tuesday, the Finnish border guard said it believes it will be necessary to build 150 miles of barriers in high-risk areas.

‘The physical barrier itself is indispensable in a large-scale entry situation, acting as a barrier and an element of diversion for potential crowds,’ the border guard said in a statement.

Iran: Mehran Samak ‘shot in the head’ by security forces for celebrating US World Cup…