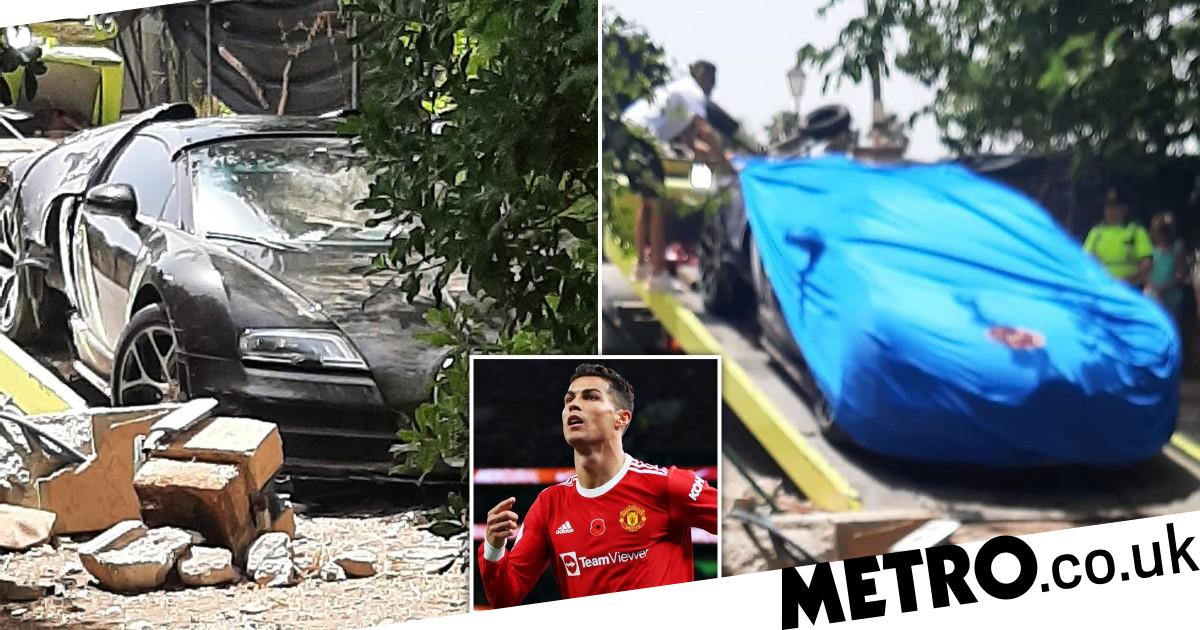 A photo has emerged showing the damage to Cristiano Ronaldo’s crashed Bugatti Venyon supercar worth £1.7 million.

The crash happened yesterday morning in Majorca after the luxury vehicle was shipped to the Spanish island for the footballer to enjoy during his family summer holidays.

It is thought to have been being driven by one of his bodyguards, who crashed into a wall but escaped unharmed.

Dad-of-five Ronaldo, 37, was in another vehicle in a small convoy with his loved ones when his employee came off the road and smashed into the stone wall.

Island newspaper Cronica Balear said the bodyguard got out of the car to continue his journey and left other staff employed by the Man United footballer to receive the police at the scene.

It was not immediately made clear where the Portuguese international could have been heading, but he has been pictured enjoying days out with his family on his £5.5 million superyacht which is moored in Port Adriano.

Ronaldo is believed to be renting a luxury villa near the scene of yesterday morning’s accident on a minor road near Joan March Hospital in the municipality of Bunyola.

The damaged Bugatti was later taken away on a tow-truck covered in a blue tarpaulin.

Spanish police confirmed yesterday afternoon afternoon they had no information to suggest Cristiano had been in the car at the time.

One well-placed source said: ‘The car smashed into a wall but there was only material damage with no-one injured and the driver accepted full responsibility for what happened.

‘The information about who was behind the wheel and what occurred is registered on a police database and is there for a court or officers to access if any further investigations need to be conducted.

‘But it is more a case of the information needing to be registered so the owner of the property that was damaged can put in a compensation claim and use the police report as a back-up in case there is any dispute down the line about how the damage was done.’

Another insider added: ‘The car appears to have come off the road and has hit a wall which forms part of the protection to a house with a gas canister deposit behind it.

‘Cristiano was not at the scene when officers arrived and nor was the person who officers were told had been driving the car at the time of the accident.’

Ronaldo, who jetted to Majorca last week, is thought to have also transported a Mercedes-Benz G-Class to the island.

The Bugatti’s whereabouts was not immediately clear today although police said its owner or aides would have been responsible for arranging the tow-track that took the vehicle away.

The only emergency responders who attended are understood to have been police. Sources said neither firefighters or paramedics were mobilised.

Cristiano jetted to Majorca with his five children and girlfriend Georgina Rodriguez on June 14.

It is the first time Cristiano and Georgina have holidayed with their daughter Esmeralda, whose twin brother died during childbirth in mid-April.

They are expected to stay at the house for another three or four days.

The footballer and his family picked Majorca for their summer holiday last year before the striker announced he was returning to Old Trafford.

‘It was an unusual start to the year’ – How pandemic…

These Are the Best Products And Services To Help Make Travel…