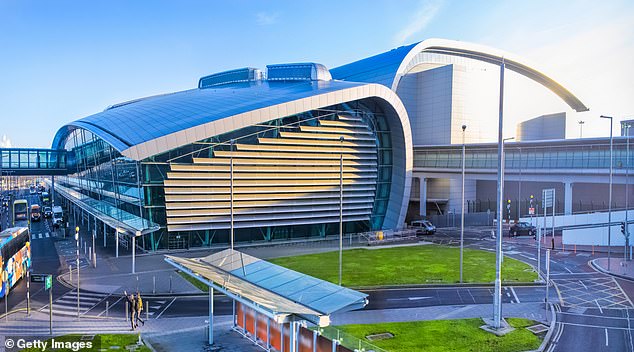 Five planes are forced to take evasive action while coming in to land at Dublin Airport after they are targeted by laser pens, sparking security fears

By Christian Oliver For Mailonline

Five planes have been targeted by laser pens as they came into land at Dublin Airport, forcing the planes to take evasive action due to security fears.

As the planes came into land at Dublin Airport on Friday evening of last week, they were targeted by the lasers, raising concerns over security.

It is thought that the laser pens were pointed at the planes from the nearby Blanchardstown area in west Dublin, around 6 miles (9.7km) from the airport.

The laser pens did not result in any serious incident, nor were any of the five planes forced to divert. But the laser pointing did heighten security concerns for airport staff and forced the pilots to take evasive action.

It is thought that the laser pens were pointed at the planes from the nearby Blanchardstown area in west Dublin, around 6 miles (9.7km) from Dublin Airport (pictured)

The pilots were forced to proceed with a specific course of action to ensure passenger safety as they landed.

If a lazer had been pointed in the eye of the pilot, however, they would have been unable to see, putting people on the plane, and potentially those in and around the airport, in danger.

A source told the Irish Independent that it was ‘very unpleasant situation for the pilots involved in these landings’.

It is unknown if the passengers were aware of the laser pointing. If the windows were not covered by blinds when landing, as is the usual protocol, the laser light could have refracted through the glass and illuminated the interior of the aircraft, possibly alarming passengers.

Garda Headquarters, the national police service of Ireland, confirmed the indecent and said it had been reported to them at 9pm last Friday, December 2.

They also confirmed that enquiries into the incident are ongoing.

The investigation into the laser pointing is being led by Blanchardstown garda station. No arrests have yet been made, nor have any suspects been identified.

A source told the Irish Independent that incidents like this have become a growing problem recently.

The source said: ‘the most likely scenario here is that these are young lads who don’t understand the potentially very dangerous consequences of their behaviour.

‘It appears to be nothing more sinister than that.’

Under Ireland’s State Airports (Shannon Group) Act 2014, it is a criminal offence to target planes with lasers, and if found, the offenders will likely be prosecuted.

No 10 admits ‘escalatory’ risk in sending fighter jets to Ukraine