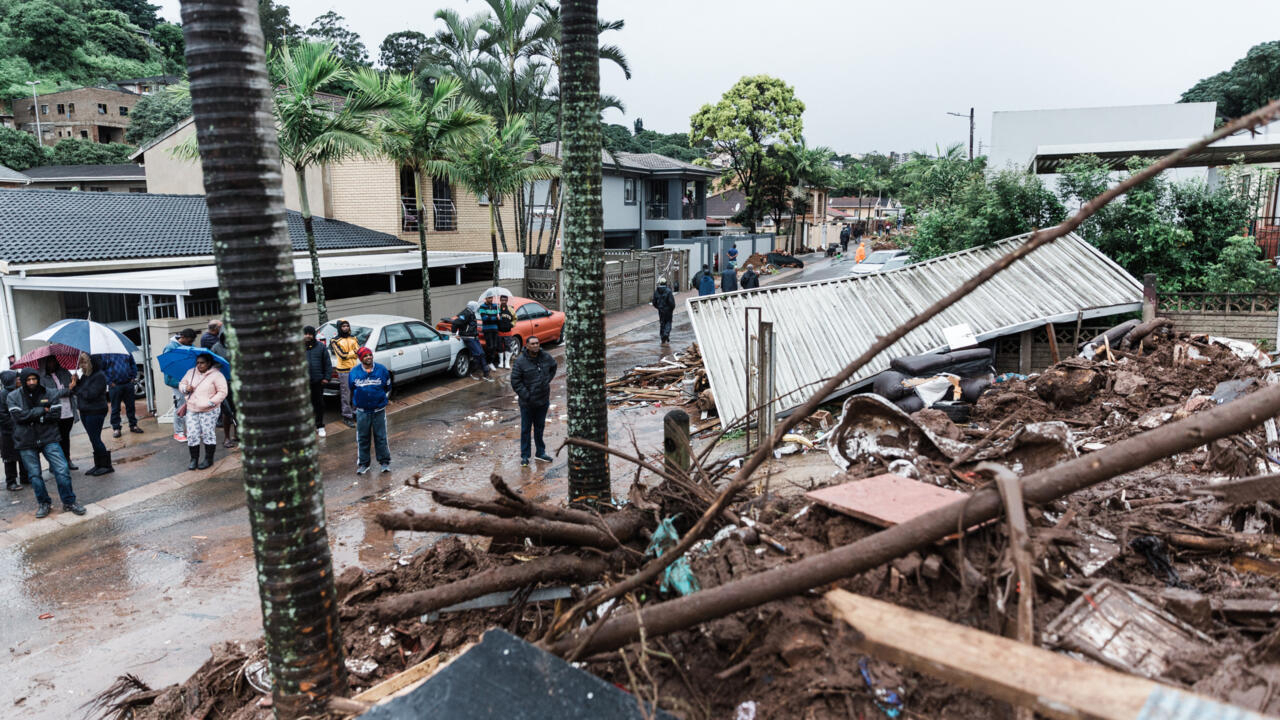 The death toll from floods and mudslides after rainstorms struck the South African port city of Durban and surrounding areas in KwaZulu-Natal province has climbed to 59, authorities said on Tuesday.

The country’s meteorologists forecasted more “disruptive” rains on the way Tuesday night but expected the “rainfall system” to weaken “considerably” on Wednesday.

“Many people lost their lives with Ethekwini (Durban metro) alone reporting 45,” while in iLembe district “more than 14 …have tragically lost their lives,” the provincial government said in a statement.

It said the disaster “wreaked untold havoc and unleashed massive damage to lives and infrastructure” affecting all races and classes from rural areas, townships to luxury estates.

“This is a tragic toll of the force of nature and this situation calls for an effective response by government,” said President Cyril Ramaphosa who is to visit Durban on Wednesday.

The rains have flooded city highways to such depths that only the tops of traffic lights poked out, resembling submarine periscopes.

Torrents tore several bridges apart, submerged cars and collapsed houses. A fuel tank was floating in at sea after being tossed off the road.

Several stacked shipping containers fell like dominoes and lay strewn on a yard, while some spilled over into a main road in the city, one of southern Africa’s largest regional gateways to the sea.

“At around 3:00 am (0100 GMT), I felt the truck shaking and I thought maybe someone bumped it and when I tried to open the curtain I saw the water level… was very high,” said truck driver Mthunzi Ngcobo.

The disaster management department in KwaZulu-Natal province, of which Durban is the largest city, urged people to stay at home and ordered those residing in low-lying areas to move to higher ground.

More than 140 schools have been affected by the flooding.

Power stations had been flooded and water supplies disrupted — and that even graveyards had not been spared the devastation.

The city had only just recovered from deadly riots last July in which shopping malls were looted and warehouses set on fire, in South Africa’s worst unrest since the end of apartheid.

There have been reports of looting, with TV footage showing people stealing from cargo containers.

The provincial government condemned “reports of the looting of containers” during the flooding.

Southern parts of the continent’s most industrialised country are bearing the brunt of climate change — suffering recurrent and worsening torrential rains and flooding.

“We know it’s climate change getting worse, it’s moved from 2017 with extreme storms to supposedly having record floods in 2019, and now 2022 clearly exceeding that,” University of Johannesburg development studies professor Mary Galvin said.

“Droughts and floods will become more frequent and more intense and that’s what we are seeing” she said, frustrated at government’s lack of preparedness.

“It’s absolutely devastating but equally devastating is the fact that we haven’t done anything to get ready for it,” she lamented.

The South African Weather Service admitted that “the exceptionally heavy rainfall overnight (Monday) and (Tuesday) morning exceeded even the expectations of the southern African meteorological community at large”.

If Airplane Seat Belts Don’t Fit You, Here’s How To Get An Extender