For Arlington 12 year old who beat cancer, Celtics are a way of life 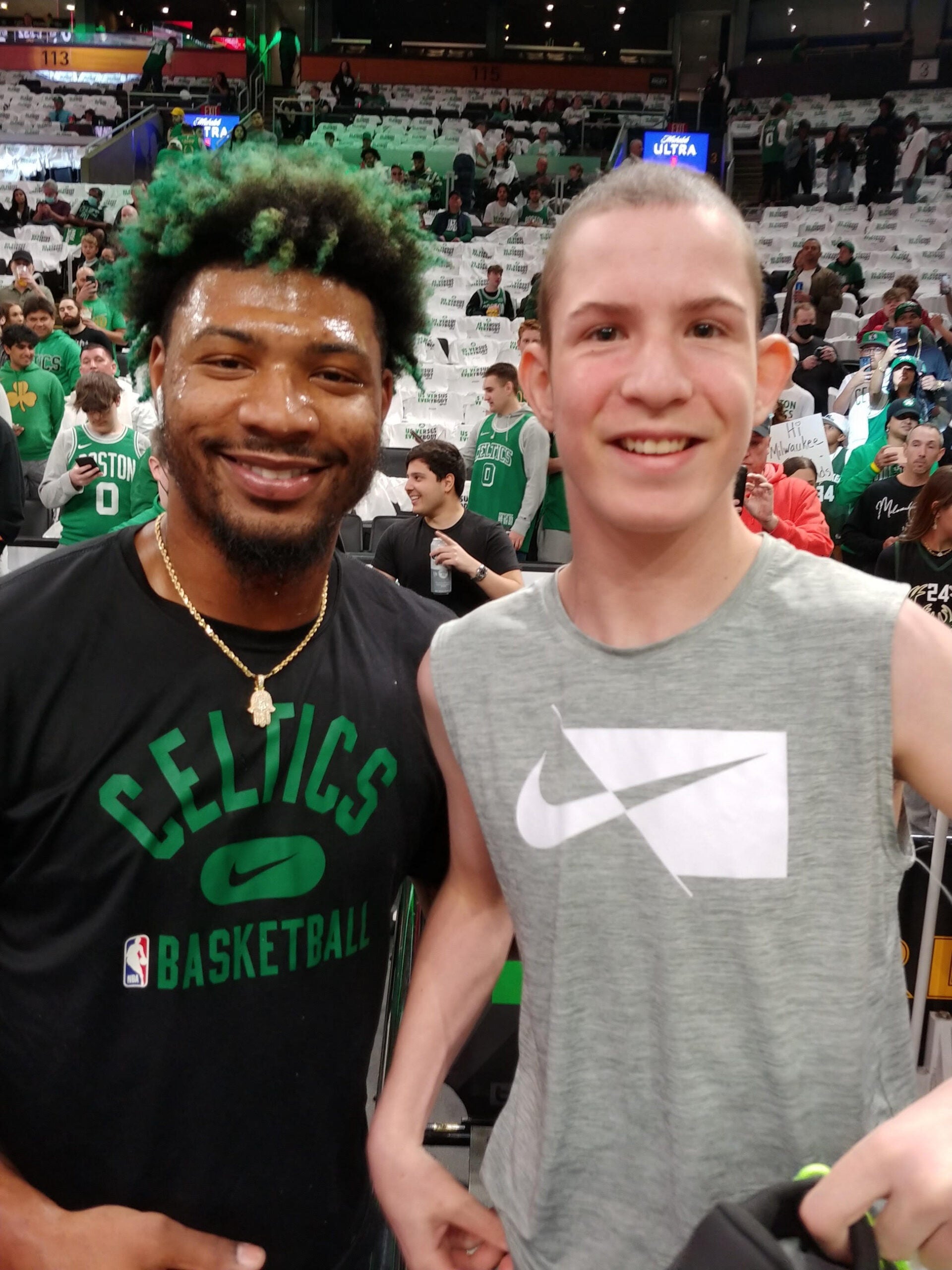 Before Game 1 of the Eastern Conference semifinals, Marcus Smart’s agent, Jason Glushon, spotted Stepan Birmann’s sign and knew he had an opportunity to make Birmann’s day.

Glushon called Smart over, and the Celtics guard gave the Arlington resident Birmann a pair of signed shoes, chatted for several minutes, and posed for photos. The following day, Smart – who lost his mother, Camellia, to cancer in 2018 – tweeted a photo from the interaction and made it clear the admiration is mutual.

“Stepan Birmann is 12 years old and cancer free and that, everyone, is more important than anything else in the world!” Smart wrote. “Thanks for supporting us man and praying for continued health my friend! That’s a true WIN!”

Birmann, a charismatic and affable sports nut who goes by “Steppy,” shared how much he appreciated Smart going out of his way to put a huge smile on his face.

“It was beyond words,” Birmann told Boston.com. “I just felt happy. You don’t meet a star every day.”

As Birmann has battled brain cancer, the Celtics have served as a distraction and outlet to get his mind off the heaviness of the diagnosis. Birmann, who is also a sports memorabilia collector, has met everyone from Bill Russell to JoJo White to Antoine Walker over the years, and he’s loved going to countless games with his father, Michael, who has had season tickets since before Birmann was part of the family.

Birmann, now a thriving seventh-grader at Ottoson Middle School who is happiest on the basketball court, has had anything but a linear journey. He was born in Vladivostok, Russia, and experienced prenatal exposure to HIV, hepatitis, and more. He was placed in an HIV ward, and none of the locals acted on the ads in the paper to adopt him because of the high risk involved.

Michael Birmann and Katie Clinton of Arlington learned of his story and decided to make what turned out to be the best decision of their lives. When they brought him home at around 22 months, Birmann was off-the-charts small. Now, he’s almost 5 feet, 10 inches, and is growing quickly. He plays basketball at the Arlington Boys & Girls Club and also loves hockey, baseball, and soccer.

His parents describe him as someone who’s anything but shy and always goes out of his way to brighten the spirits of those around him. Even while he was a patient at Dana-Farber, he made sure to carve out time with younger kids at the clinic and bring as much positive cheer as possible.

“We were really lucky to get paired up with him,” Michael said. “He’s just a special kid. We couldn’t have had a better match.”

Michael fondly remembers taking him to games as a kid and watching him fall asleep in their laps as the game unfolded. At home, Birmann used to recite the opening lineups verbatim and sing the national anthem, pretend to come out of the locker room, and play with the plastic hoop in their living room.

He was seemingly healthy until one day, in November 2020, doctors discovered a brain tumor that developed back when the embryo was forming.

“It’s every parent’s worst nightmare to take them to that MRI and find out there’s a mass on his brain,” Michael said.

Birmann underwent two surgeries and radiation therapy, then a mentally and physically taxing year of chemotherapy that ended four months ago. Following a recent MRI, doctors determined they’re now able to remove the port they relied on for chemotherapy.

He’s well on his way toward becoming a “regular kid” and, they hope, putting this chapter of his life fully behind him. His parents are constantly amazed by his unwavering positivity even in dark times.

Watching the Celtics on TV was a wonderful distraction, but he missed going to TD Garden and immersing himself in a raucous crowd. Michael called it a “breath of fresh air” for Birmann and the family when they were able to attend games again starting last spring. Birmann is a bit of a local celebrity, and fellow Celtics fans often say hello and wish him the best.

No visit was more meaningful than the one in early May, though. Jayson Tatum also came over and gave Birmann a wristband that now hangs by the bobbleheads in his room. Smart’s sneakers sit in a nearby chair, and he often glances at his memorabilia and grins as he lies in bed.

Birmann, who can’t wait to attend the NBA Finals, is forever grateful for the support he’s gotten from Smart, Tatum, and the rest of the Celtics community.

London’s Smaller Museums Are Hidden Jewels Worth Searching Out

‘I earn £100k teaching people how to be influencers…

Priyanka in Tears After Ugly Fight With Nimrit, Gets Hug…