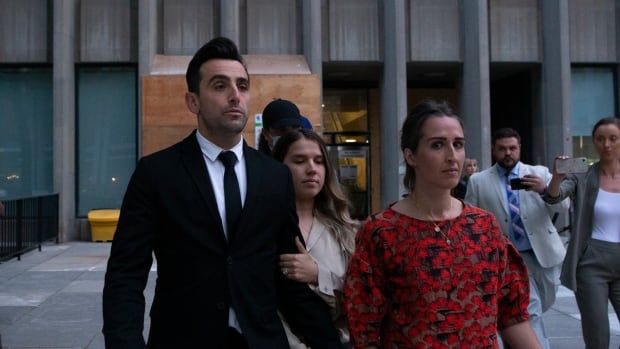 WARNING: This article contains graphic content and may affect those who have experienced​ ​​​sexual violence or know someone affected by it.

Canadian rock musician Jacob Hoggard will remain on bail ahead of his sentencing for sexual assault causing bodily harm after raping an Ottawa woman in the fall of 2016.

A Toronto jury convicted the former Hedley frontman on a single charge on Sunday, but acquitted him of two charges involving a 16-year-old fan. Hoggard, 37, had pleaded not guilty to all three charges, and his trial began in the Ontario Superior Court of Justice on May 5.

On Monday, Ontario Superior Court Justice Gillian Roberts ordered new bail conditions for Hoggard, including that he remain in the province of British Columbia, except for when he is required to travel to Toronto for court appearances, and he cannot have a passport.

His wife, Rebekah Asselstine, will act as one of two sureties, and provide a $200,000 pledge to ensure he complies with his bail conditions.

Hoggard must reside at his family’s home in Vancouver, or at another pre-approved address with one of his sureties. He is subject to a curfew from 10 p.m. to 6 a.m., with random virtual compliance checks.

Hoggard is due back in court on Friday at 2:15 p.m. ET for a sentencing date to be set.

‘The stakes are extremely high for Mr. Hoggard’

A conviction for sexual assault carries a maximum prison sentence of 14 years; there is no minimum sentence unless a firearm is involved or the complainant is younger than 16.

The Crown had requested Hoggard’s bail be revoked following his conviction, but his defence lawyer, Megan Savard, argued that it would be easier for Hoggard to prepare for his sentencing if he remained on bail.

WARNING: Video contains details of sexual violence | Former Hedley frontman Jacob Hoggard was found guilty of sexual assault causing bodily harm after violently raping an Ottawa woman in the fall of 2016, but a Toronto jury acquitted him of sexually assaulting a 16-year-old.

Roberts acknowledged that Hoggard was a heightened flight risk because he was facing a significant sentence of imprisonment.

However, she said his strong ties to his community, as well as the fact he has a young son, is working in Vancouver, and his wife’s financial pledge, were sufficient to ensure he would comply with the terms of his release and attend court.

“The stakes are extremely high for Mr. Hoggard. I believe he should be put in the best position as is possible in the circumstances to prepare for sentencing,” Roberts told the court hearing, which was held over Zoom.

Hoggard is scheduled to appear in court on the latest charge on August 4.

Support is available for anyone who has been sexually assaulted. You can access crisis lines and local support services through this Government of Canada website or the Ending Violence Association of Canada database. ​​If you’re in immediate danger or fear for your safety or that of others around you, please call 911.

Where To Watch (And What To Expect)