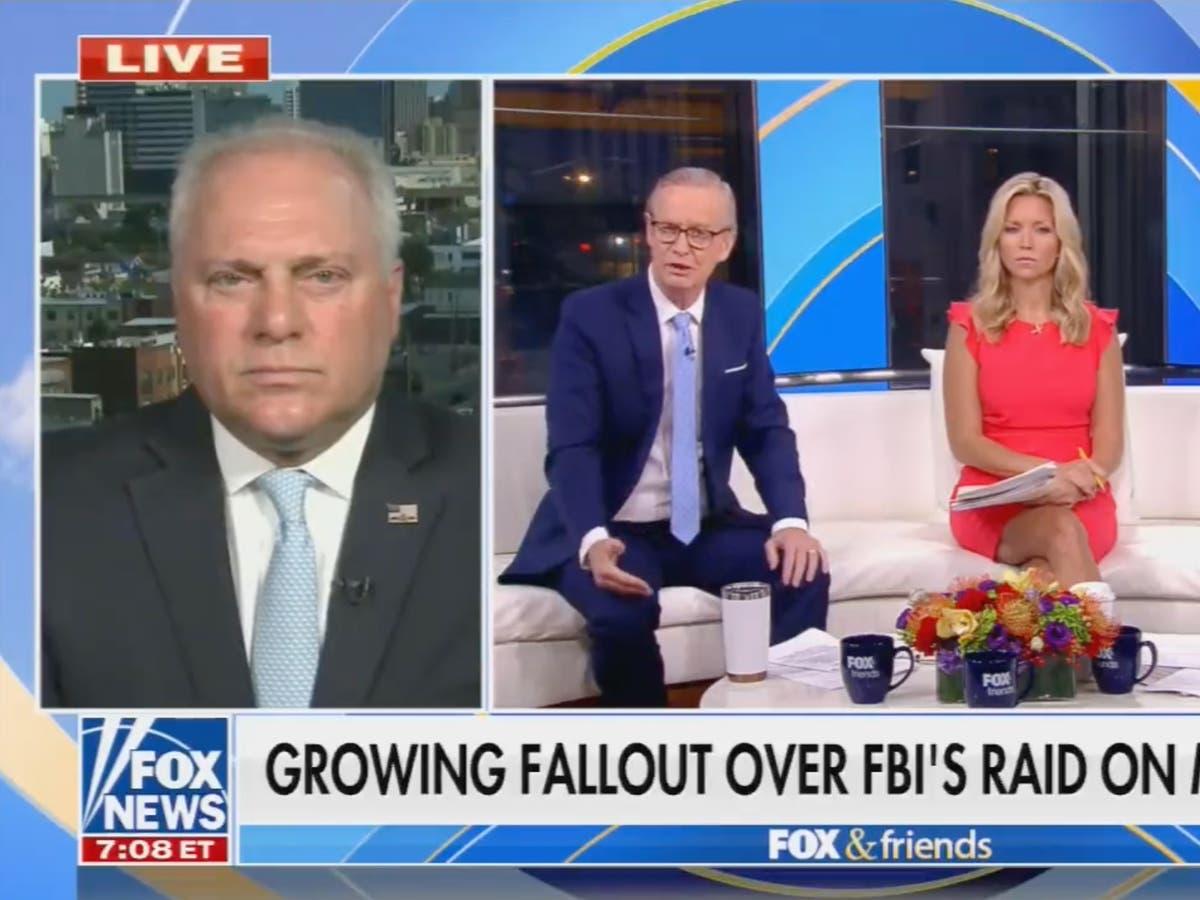 House minority whip Steve Scalise has come under fire on social media for labelling the FBI agents who searched Mar-a-Lago as “rogue” on Fox & Friends. He made the remarks mere hours before a man tried to breach an FBI office in Cincinnati.

Rep Scalise went on Fox & Friends on Thursday morning to discuss the FBI’s execution of a search warrant on former US president Donald Trump’s home at Mar-a-Lago, Florida, on Tuesday when he claimed the agents involved in the search were “rogue”.

“We’re (Republicans) very strong supporters of law enforcement, and it concerns everybody if you see some agents go rogue — if you see an agent that doesn’t have the right checks and balances at the top,” said Rep Scalise.

Fox host Steve Doocy surprised many by schooling the senior Republican on his party’s support for law enforcement and challenged the minority House whip by saying: “Steve, who went rogue? They were following a search warrant.”

The Republican, who refused to address Doocy’s criticism of calls from other GOP colleagues for the FBI to be “destroyed” and “defunded”, said “we want to find that out” and provided no defence of the FBI in the wake of Tuesday’s search on Mar-a-Lago. Notably, somebody familiar with the investigation told the Washington Post that the search was over “classified nuclear documents” stored at the Florida property.

Hours after Scalise’s appearance on Fox & Friends, a 42-year-old man from Columbus, Ohio, was shot dead by FBI agents and other law enforcement agencies who were forced to respond to an attack on a FBI field office in Cincinnati, Ohio.

Ricky Shiffer, the suspect, was shot dead and social media accounts using his name appeared to suggest his attendance on January 6. According to NBC News, his intent was to kill FBI agents “on sight” in the wake of the Mar-a-Lago search warrant being executed.

On social media, many across the political aisle commented on the GOP and Rep Scalise’s attacks on the FBI in light of the Cincinnati shooting, with democracy advocate Fred Wellman tweeting: “They have nothing but lies and now people are going to get hurt.”

Phillip Bump, the Washington Post’s national correspondent, meanwhile reminded his followers “that the House minority whip appeared on Fox shortly before the news broke in Cincinnati where he answered a question about threats to the FBI with an assertion that agents at Mar-a-Lago went ‘rogue’ “

He continued: “When a host of “Fox and Friends” is pushing back on your claim that FBI agents were ‘rogue’ in searching Mar-a-Lago, it’s a good sign that your bet on blind fealty to Trump’s narrative isn’t a winning one.”

“This did not age well at all for Scalise, in light of Merrick Garland’s press conference today and the attack on the FBI office in Cincinnati,” another Twitter user added.

Rep Scalise had earlier called for Mr Garland to make a statement about the search on Mar-a-Lago and said on Fox & Friends: “Why hasn’t he held a press conference, why would president Biden talk about this to the press?”

Speaking during a press conference later on Thursday, Mr Garland said he personally authorised the search on Mar-a-Lago and that it wasn’t a decision he or his Justice Department “takes lightly”.

The Attorney General also voiced his support for the Mar-a-Lago search warrant to be made public amid attacks on the department and FBI by Republicans and Mr Trump himself – as well as “substantial public interest in this matter.”

“The men and women at the FBI and Justice Department are dedicated, patriotic public servants,” Mr Garland added during the press conference of attacks on law enforcement. “Every day, they protect the American people from violent crime, terrorism and other threats to their safety while safeguarding our civil rights.”

The Independent has approached Rep Scalise’s office for comment.