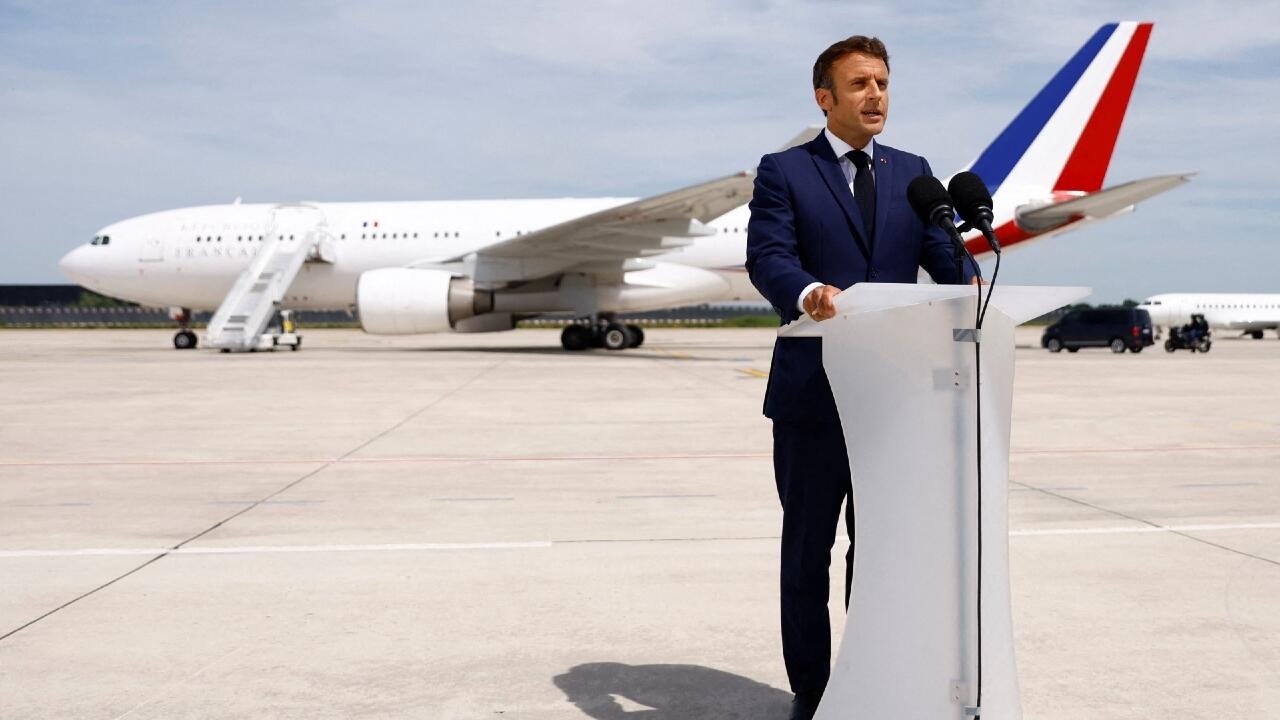 Faced with the threat of a hung parliament, French President Emmanuel Macron’s ruling coalition has shifted its fire from the far right to a new left-wing bloc after a first round of parliamentary elections that exposed the inadequacy of its campaign and the narrowness of its support base.

You know France’s presidential camp is in trouble when the commander-in-chief suits up for a tarmac address, complete with engines revving, to warn that an inconclusive election puts the nation in danger. That’s how Macron waded into the country’s legislative polls this week, urging voters to hand him a “strong majority” in the second and final round on Sunday – in the name of France’s “higher national interest”.

“In these troubled times, the choice you’ll make this Sunday is more crucial than ever,” Macron said on Tuesday, moments before boarding a flight to visit French troops stationed near Ukraine. “Nothing would be worse than adding French disorder to the world’s disorder,” he warned with the presidential plane in the background, his statement carefully choreographed for dramatic effect.

“Not one vote should be missing for the Republic,” the French president added, appearing to equate his own political fortunes with those of the country and its cherished republican regime.

Macron’s live statement was a reminder of the extraordinary backdrop to France’s latest electoral cycle, unfolding in the shadow of a catastrophic war that is fuelling instability, price spikes and food insecurity in parts of the world. It also highlighted the febrility that has gripped the presidential camp as it faces the prospect of a hung parliament thwarting its domestic agenda over the next five years.

Just weeks after securing his own re-election, the French president saw his ruling coalition slump to a dead heat in the first round of parliamentary elections on June 12, matched by a left-wing alliance cobbled together only last month. While the ruling party and its allies are still expected to win more seats in next Sunday’s run-offs, there is a significant chance they could fall short of an absolute majority.

Macron’s allies have described the prospect of a hung parliament as an electoral “anomaly” and a threat to the country’s stability. Hoping to drum up support ahead of Sunday’s run-offs, they have doubled down in their attacks against the leftwing “NUPES”, a broad alliance spanning the left of France’s political spectrum but dominated by the hard-left La France insoumise (LFI) of Jean-Luc Mélenchon.

The leftist firebrand is hoping to force the president into sharing power in a “cohabitation”. Moments after Macron’s airport statement, he mocked a “Trumpian stunt designed to raise the spectre of an enemy within”.

The party of order

It wasn’t so long ago that Macron and his allies were busy cultivating Mélenchon’s supporters, whose votes they needed to defeat the far right’s Marine Le Pen in the April 24 presidential run-off. For all their differences, “Macronists” and “Insoumis” were allies in defending the Republic against the far right. As Macron’s ally Richard Ferrand, the head of the National Assembly, argued at the time, “we share common values”.

But that was then. Two months on, the ruling party has singled out the veteran leftist and his fledgling coalition as the new threat to the Republic. It has portrayed the NUPES as another extremist outfit – in the words of Macron’s former education minister Jean-Michel Blanquer, an extreme “just as dangerous as [Le Pen’s] far right”.

It’s a narrative that fits well with Macron’s moderate constituency, says Jean-Yves Dormagen, a professor of political science at the University of Montpellier and the head of polling institute Cluster17.

“What binds together Macron’s camp, more than a political project, is a rejection of extremism, of populism, of figures deemed too radical and extreme, like Mélenchon or Le Pen,” Dormagen said.

“When Macron presents himself as the head of the ‘republican camp’, of the party of order and stability, he highlights that which underpins his electoral coalition: namely a desire for good governance, stability, order and the status quo,” he added. “That’s the cement holding together his support base – a coalition of centre-right and centre-left voters who disagree on most other issues.”

From their perspective, France’s current electoral cycle can be seen as the fulfilment of Macron’s raison d’être: to keep the middle ground in power and bat away the “extremes”, from right or left.

“Whether he’s facing Le Pen or a left-wing bloc perceived as radical, dangerous, fostering economic disorder, Macron sticks to the same narrative, casting himself as the competent and sensible option,” Dormagen said.

Unsurprisingly, some of the fiercest attacks levelled at the NUPES have come from ministers whose jobs are on the line in next Sunday’s run-offs – like Amélie de Montchalin, the environment minister and senior cabinet member who trailed her left-wing rival by 7 points in her constituency south of Paris after the first round of voting on June 12.

The next day, Montchalin appealed “to all republicans” to hold off the “far-left anarchists” who “promise disorder and submission for France”. Speaking on CNews, she framed the election as a “referendum for Europe and against disobediance, a referendum for order and against street disorder”, seemingly unfazed by the fact that her opponent, veteran Socialist Jérôme Guedj, hardly qualifies as a radical.

Her cabinet colleague Clément Beaune, the junior minister for Europe who is locked in a tight race in Paris, focused his attacks on members of Mélenchon’s party, warning that “all NUPES lawmakers, particularly those coming from La France insoumise, will be a source of agitation and provocation (…) and won’t work for the benefit of the country”.

Others sought to equate the far right and the radical left, conflating them under the “extremist” banner and suggesting a porosity between the two. Élisabeth Borne, Macron’s newly appointed prime minister, set the tone just minutes after the first-round exit polls, warning of an “unprecedented confusion between the political extremes”.

The warning appeared to confuse some in her own ranks, not least the former sports minister Roxana Maracineanu, who raised eyebrows – and sparked outrage – by invoking a “Republican Front” (traditionally an anti-Le Pen alliance) against her second-round opponent Rachel Kéké, the chambermaid who shot to fame after leading a groundbreaking campaign for decent pay and better working conditions at a Paris hotel.

A thriller waiting for an audience

Kéké’s story alone is enough to make the current parliamentary vote one of the most compelling in recent decades. So is that of Stéphane Ravacley, the Besançon-based baker who went on a hunger strike to halt the deportation of his Guinean apprentice. Both topped their respective races after the first round of voting. Victory next Sunday would signal a small revolution in an Assembly that has been stripped of working-class representatives over the years.

The newcomers bidding to shake up France’s National Assembly

The election has already delivered its share of surprises, starting with the latest humiliating setback for former prime minister Manuel Valls, who was dumped out in the first round despite Macron’s endorsement. Blanquer, the former education minister best known for his rants about “wokists” and “Islamo-leftists” in academia, was another prominent casualty.

Their fate, and the suspense surrounding the final result on June 19, have turned this election into a thriller – albeit one that half the country has decided to sit out, with the rate of abstention hitting a historic high of 52.5 percent last Sunday.

“Once you start analysing this election, it’s really quite fascinating – the trouble is getting the French to realise this,” said Dormagen, stressing the huge discrepancy in attention given to presidential and parliamentary elections. “There was hardly any campaigning, little media exposure, and only one prime-time debate between candidates,” he added. “Most people have little interest in politics and a large minority have none at all. It’s up to politics to go fetch them.”

Politicians, however, have done little to draw attention to the législatives, with the notable exception of Mélenchon, who bounced back from his narrow presidential defeat in spectacular – and highly unorthodox – fashion, urging voters to “elect (him) prime minister” and challenging the assumption that parliamentary votes should necessarily hand the newly elected president a majority.

While the left’s tireless campaigner held rallies up and down the country to drum up support for NUPES candidates, “[Macron] and his allies chose instead to abstain”, wrote French daily Le Monde in a scathing editorial on Monday, noting that the ruling camp had skipped its duty to “argue, clarify and debate” during the campaign.

“Perhaps they placed too much faith in the natural order of things, since recent elections have always rewarded the winner of the presidential race,” the paper added. “No doubt they did so by design too, mindful that low turnout is good news for a party that can count on older, wealthier, more educated voters who are less prone to abstaining.” Either way, “the tactic has backfired, demobilising Macron’s own camp.”

The fact that efforts to remobilise that base rest largely on demonising the opposition points to another weakness in the ruling camp: its reluctance to discuss Macron’s policy agenda for the next five years.

“Macron’s camp has precious little to say aside from attacking Mélenchon – which is a bit thin for a political platform,” said Michel Wieviorka, a sociologist and professor at the École des Hautes Études en Sciences Sociales (EHESS), adding that the president’s decision to “skip” the legislative elections mirrored his “lack of consideration for parliament as a whole”.

Macron’s majority in doubt: Can a united left derail the centrists’ lock on power?

The ruling party was not alone in underestimating this year’s parliamentary polls. Many observers also assumed the re-elected president would sail to a majority just like his predecessors, thereby misreading both the public mood and the shifting balance of power in what is now a tripolar system.

Macron’s re-election on April 24 was historic, making him the first president with a parliamentary majority to win a second term. His failure to follow that up with a win in Sunday’s first round of parliamentary elections was equally historic, since no other president had so far failed to top a legislative vote immediately following a presidential one (counting overseas votes, Macron’s ruling coalition trailed the NUPES by a whisker).

“If you look at genuine support for Macron and his government, you see that only a minority of the French back the presidential camp,” said Dormagen. “It’s a very different situation from five years ago, when Macron’s election signalled a change of power and his parliamentary candidates rode a wave of sympathy. This is why the ruling party is finding these legislative elections so challenging: its supporters are a minority of the French.”

While Macron trounced Le Pen for the second time in the April 24 run-off, only 38 percent of registered voters actually cast a ballot for him – the lowest tally in history. And that was including the many tactical voters who did so out of “republican” duty. According to a recent Elabe poll, an even smaller number – 35 percent – actually want the president to have a majority in parliament.

Those numbers were enough to win re-election in April against a candidate most French voters deem unfit to govern. Whether they can also guarantee the stability that is Macron’s main selling point is far from certain.

I was dying and denied an abortion. Now I’m battling a country’s ban from 6,000 miles…