Fresh protests across the US as new abortion reality takes shape 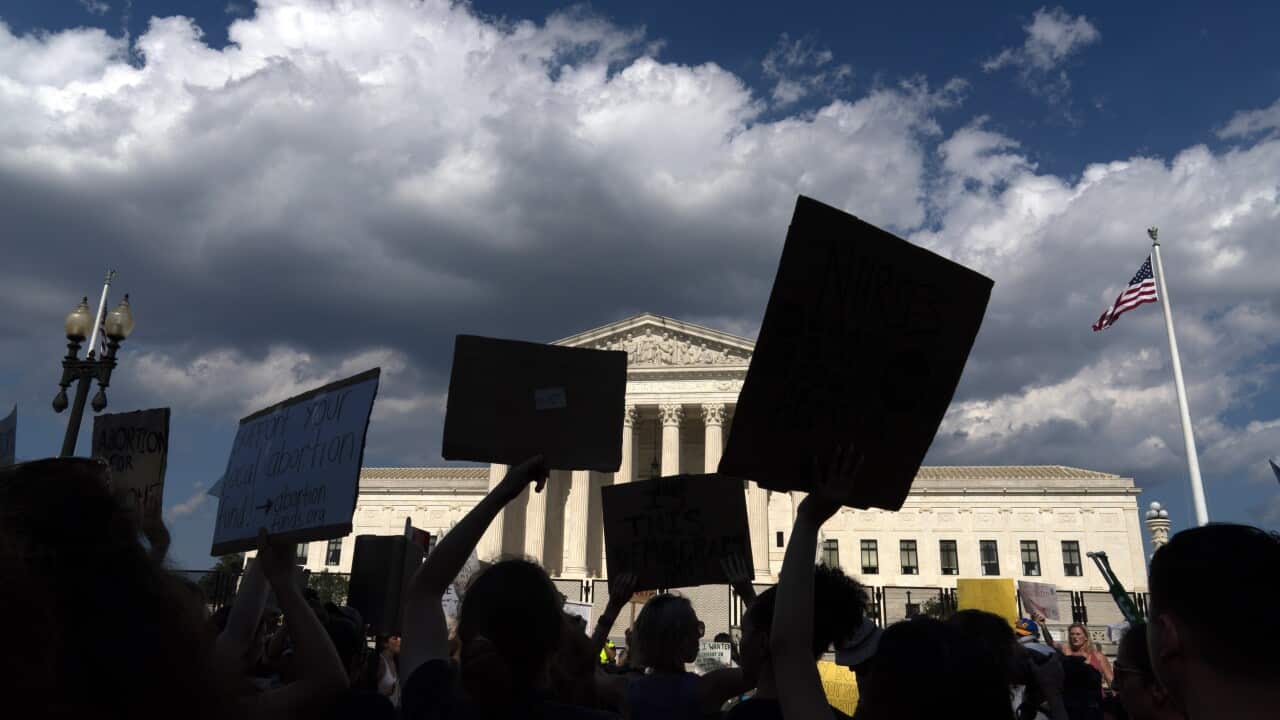 Abortion rights defenders fanned out across America on Saturday for a second day of protests against the Supreme Court’s thunderbolt ruling, as state after conservative state moved swiftly to ban the procedure.
The deeply polarised country woke up to a new level of division: between states that will now or soon deny the right to abortion, enshrined since 1973 and those that still allow it.

After protests went late into the night, several hundred people thronged the streets outside the fenced-off Supreme Court again on Saturday, in hot summer weather, carrying signs that read “War on women, who’s next?” and “No uterus, No opinion.”

“What happened yesterday is indescribable and disgusting,” said Mia Stagner, 19, a political science major in college. “Being forced to be a mother is not something any woman should have to do.”
Twin demonstrations were also getting underway in Los Angeles — one headed to city hall and the other to the federal courthouse — with dozens of smaller rallies planned from coast to coast.
At least eight right-leaning states imposed immediate bans on abortion — with a similar number to follow suit in coming weeks — after the Supreme Court eliminated 50-year-old constitutional protections for the procedure, drawing criticism from some of America’s closest allies around the world.
Fueling the mobilisation, many now fear that the Supreme Court, with a clear conservative majority made possible by Donald Trump, might next set its sights on rights like same-sex marriage and contraception.
President Joe Biden — who has likewise voiced concerns the court might not stop at abortion — spoke out again Saturday against its “shocking decision.”

“I know how painful and devastating the decision is for so many Americans,” said the president, who has urged Congress to restore abortion protections as federal law, and vowed the issue would be on the ballot in November’s midterm elections.

Activists rally in front of City Hall in Los Angeles as they protest the Supreme Court’s ruling on abortion. Source: AP / Keith Birmingham/AP

Women in states that severely restrict abortion or outlaw it altogether will either have to continue with their pregnancy, undergo a clandestine abortion, obtain abortion pills, or travel to another state where it remains legal.

“We are going to see some nightmare scenarios, sadly,” Mr Biden’s spokeswoman Karine Jean Pierre told reporters on Air Force One, as the president headed to Europe for Group of Seven and NATO summits.

“That is not hypothetical,” she said.

Friday’s demonstrations mostly passed off without incident — although police fired tear gas on protesters in Phoenix and Arizona, and in the Iowa city of Cedar Rapids a pickup truck drove through a group of protesters, running over a woman’s foot.
In Washington on Saturday the scene was once again mostly peaceful, barring the odd shouting match between abortion rights advocates and opponents.
Carolyn Keller, 57, who travelled all the way from New Jersey, said she was enraged by the ruling, warning: “They came after women. They will come after the LGBT community and contraception.”
But counter-protesters like Savannah Craven stood firm.
“It’s not a personal choice to have an abortion, it involves two people and unfortunately that choice ends in the ending of someone’s life,” she told AFP.

As protesters like Ms Craven made clear, while Friday’s ruling represents a victory in the religious right’s struggle against abortion, the movement’s ultimate goal is a nationwide ban.

That goal is now within sight in about two dozen states which are now expected to severely restrict or outright ban and criminalise abortions.
Missouri was first to ban the procedure on Friday, making no exception for rape or incest, joined as of Saturday morning by at least seven other states: Alabama, Arkansas, Kentucky, Louisiana, Oklahoma, South Dakota and Utah.
Indiana also announced it would take steps to do the same, and abortion providers in Wisconsin said the procedure was now banned there as well.

In its ruling, the Supreme Court tossed out the argument in Roe v. Wade that women had the right to abortion based on the constitutional right to privacy with regard to their own bodies.

Women in those states will either have to continue with their pregnancy, undergo a clandestine abortion, obtain abortion pills, or travel to another state where it remains legal.

Several Democratic-ruled states, anticipating an influx of patients, have already taken steps to facilitate abortion and three of them — California, Oregon and Washington — issued a joint pledge to defend access in the wake of the court’s decision.

Less than two hours after the court’s decision, the state’s attorney general Eric Schmitt tweeted a photo of himself signing off on the prohibition, calling the occasion “a monumental day for the sanctity of life”.
The swift ban forced the Planned Parenthood clinic on St Louis’ Forest Park Avenue — which had been the last facility providing abortions in the state — to immediately stop offering the procedure.
Standing outside the clinic, Pamela Lukehart choked back tears as she recalled how things were before the landmark 1973 Supreme Court decision enshrining a woman’s right to the procedure.
“Women died getting abortions back then,” the 68-year-old told AFP, her voice breaking as she stood alongside scores of other protesters.

“We were trying to protect women’s rights, women’s lives, and now they’ve taken all that away from us.”

Hundreds of protesters took to the streets in St Louis following the ban, chanting “My body, my choice,” and carrying signs bearing slogans like “Abortion is Healthcare”.

Addressing the crowd through a megaphone, one speaker said: “We cannot stand by while our rights are taken away from us.”

Back at the Planned Parenthood clinic, protester Alec Ryan, 31, said the new bans on abortion would have tangible consequences.
“So there are going to be women and pregnant people who are trapped in abusive marriages because they can’t get an abortion. There are going to be people who are put in situations that they shouldn’t be put into,” he told AFP.
“It’s going to be a tragedy.”
Linda Locke, who sits on the Planned Parenthood’s board in St Louis, worried about the impact of Friday’s decision on younger generations.

“I have granddaughters, right?” she said. “And they all grew up thinking their body was under their control. And today, it’s just shocking to me and disappointing that the Supreme Court just told them that, ‘No, you don’t… We don’t trust you to make decisions about your own body’.”