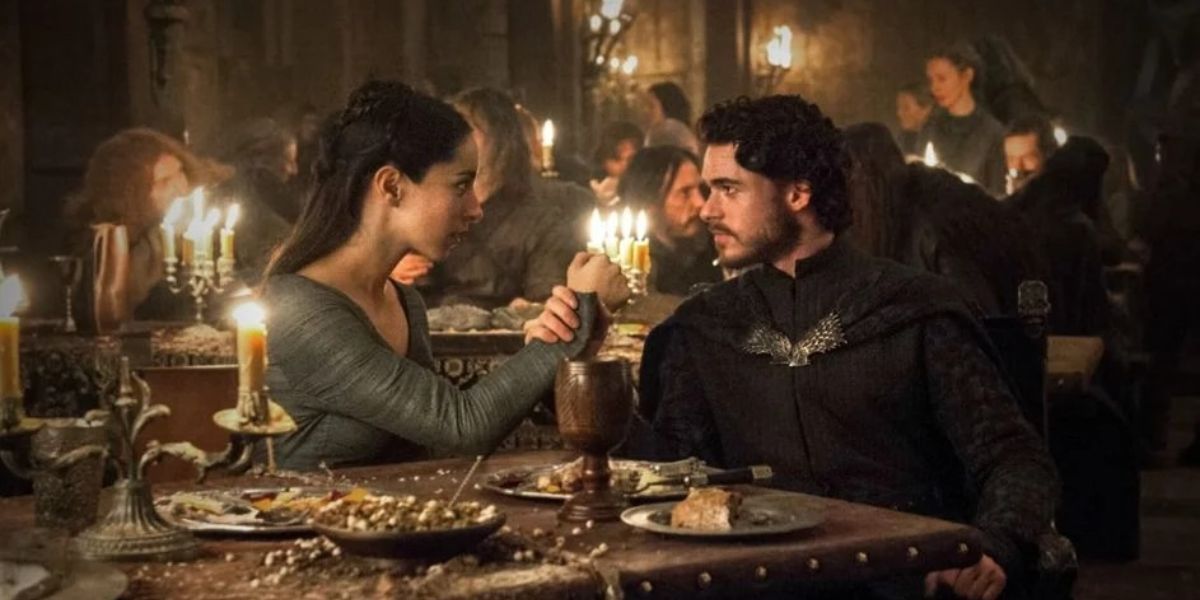 Game of Thrones‘ George R.R. Martin recently opened up about how writing the Red Wedding was a “painful” experience.

The author recalled struggling to draft the chapter, which appeared in the third A Song of Ice and Fire novel, A Storm of Swords, in an interview with The Independent. “I finished the entire book, except for the Red Wedding,” Martin said. “That was such a painful chapter for me to write, losing some characters that I had come to know and love. Nine years I’d been with these characters, and now I was going to kill them horribly! That was difficult.”

Related: GOT Author Discusses House of the Dragon Competing With LOTR: The Rings of Power

“It’s a horrible chapter, and it upsets people,” he added. “It makes people angry, it makes people sad. People throw the book against the wall or into the fireplace. When it was on TV, it had the same effect on tens of thousands, if not millions, of people. To my mind, that’s good. We’re talking about death here!”

The Red Wedding was adapted in Game of Thrones Season 3, Episode 9, “The Rains of Castamere,” which aired in June 2013. The sequence depicts Robb Stark’s betrayal by Roose Bolton and Walder Frey, resulting in the death of Robb, his wife Talisa, mother Catelyn and virtually all of his bannermen, and is frequently cited as one of the most harrowing episode finales of all time. The term “Red Wedding” has since entered the popular lexicon as a way of describing a shocking and disastrous outcome, such as when Legacies and Roswell, New Mexico producer Julie Plec likened The CW’s recent spate of cancellations to the infamous event.

Related: REPORT: HBO’s House of the Dragon Is Already Working on Season 2

Although Game of Thrones‘ initial seasons received considerable acclaim from critics and fans alike for effectively adapting Martin’s novels, the fantasy series’ later seasons were less well received. This was at least partly attributed to showrunners David Benioff and D. B. Weiss running out of books to adapt, as A Song of Ice and Fire remains unfinished to this day. Martin later described the show outpacing the books as one of his biggest Game of Thrones regrets.

The scribe is currently working on the penultimate A Song of Ice and Fire tome, The Winds of Winter, as well as helping oversee the upcoming Game of Thrones prequel series House of the Dragon. Following fan speculation that he’s taken a hands-off approach to House of the Dragon, Martin recently set the record straight in a blog post that confirmed he’s “heavily involved” with the production.

All eight seasons of Game of Thrones are currently streaming on HBO Max. House of the Dragon arrives on the platform on Aug. 21.

Leon is an Associate News Writer at CBR. He reports on the latest developments in film and TV, covering everything from popcorn cinema to prestige mini-series. His previous freelance writing credits include articles on film, TV, comics, and video games for Screen Rant, Polygon, The Things, Cultured Vultures, and Taste of Cinema. Originally from Australia, Leon is currently based in the UK.

modi: Country getting out of ‘vicious cycle’ it was trapped in before 2014: PM Narendra Modi