Get a loan to pay your traffic fines, says Chuck 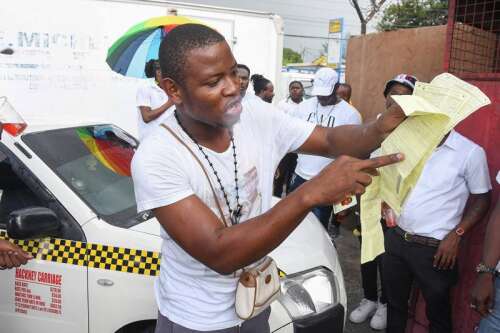 Taxi driver Kenroy Blake, otherwise known as Shamballa, shows numerous traffic tickets he recieved from the police in one day in Half-Way-Tree during a protest last month by taxi and bus operators demanding an amnesty to settle ticket arrears. (Photo: Naphtali Junior)

MONTEGO BAY, St James — Minister of Justice Delroy Chuck has offered motorists who have racked up mountains of traffic tickets a solution: get a loan and pay off your debt.

“We have, you know, over 2,000 persons with over 100 tickets. We have just about 40-odd with over 500 tickets and these are the parties who when they speak to me I say, ‘Man, you want some relief? Go get a loan, get a loan and pay it off. Because if it is not paid by the 31st of January, no relief will be there’,” he said.

Chuck was sharing his views on the issue with a batch of 43 justices of the peace for St James during their commissioning ceremony in Montego Bay last Thursday. He reinforced his earlier expressed hard-line stance against showing leniency to road users who have racked up huge numbers of traffic fines that are then left unpaid.

Some players in the public passenger service have asked for an amnesty but the Government has been reluctant to go that route. It did, however, say that motorists who clear their tabs by January 31 will not incur demerit points. The new Road Traffic Act comes into effect on February 1, 2023.

“If you pay them by the 31st of January, all the demerit points will be waived, we’re starting afresh,” Chuck stressed on Thursday.

The Government, he said, intends to put measures in place to curb the “disorderly, chaotic behaviour” now seen on the roads.

One of the measures to be rolled out next year, Chuck told the gathering, will be an electronic ticketing system that will allow for real time data checks for potential road code violations.

“The police will have very shortly, many of them do but by January, sometime in January they will have a new electronic ticketing system. And when they punch in your name or your TRN [Tax Registration Number] everything about you will come up including if you have any traffic ticket, including if there is a warrant for execution,” he said.

“What is important is that, that warrant can be executed then and there-because the machine will show that there’s a warrant out-and the inconvenience that will be accorded [to the motorist] is not worth it,” he warned.