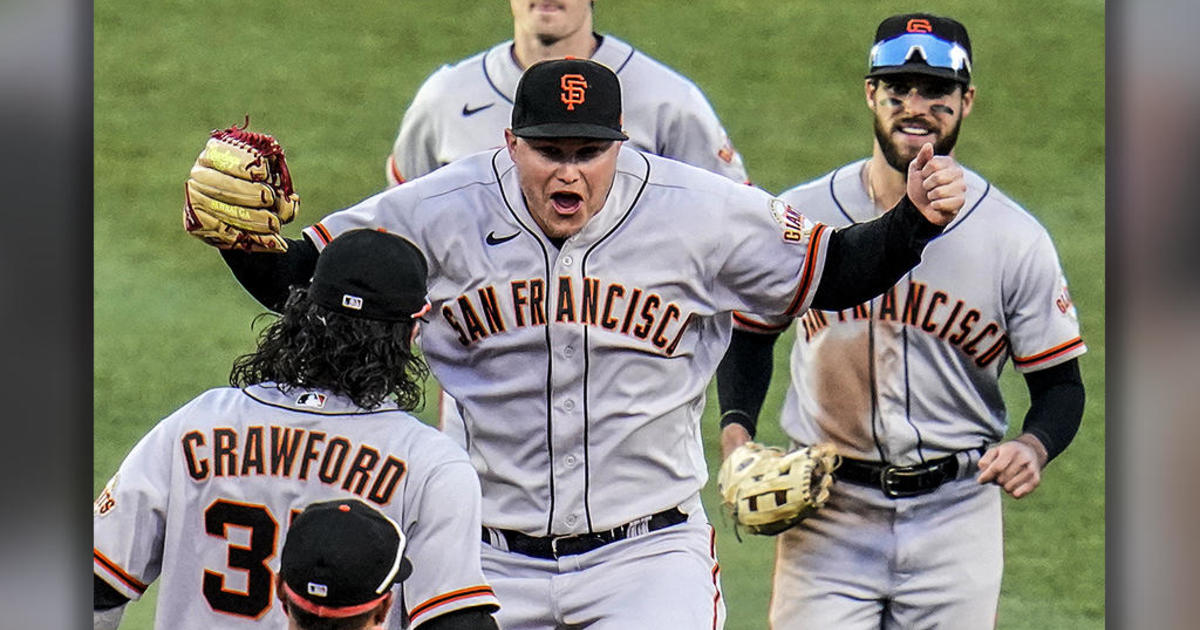 PITTSBURGH (AP) — The San Francisco Giants don’t overwhelm with their bats. Or their pitching. Or their defense. Their margin of error isn’t quite as wide as the two rivals they are trying to chase down in the loaded NL West.

That’s fine with manager Gabe Kapler, who is happy to play the matchups, substitute freely and rely on a fair amount of grit and veteran leadership to hang around in one of the hottest races in baseball.

Brandon Crawford delivered a pair of late RBIs and the Giants took advantage of a shaky performance by Pittsburgh’s bullpen to rally for a 7-5 win on Saturday that pushed San Francisco to a season-best 10 games over .500 (37-27).

The surge has the Giants in the mix with the Los Angeles Dodgers and San Diego Padres in one of the toughest divisions in the majors.

“We’re pretty comfortable making sure that everybody is ready for every big moment and then those guys do a great job of preparing themselves for those,” Kapler said.

Crawford tied the game at 4 with an RBI single off Pirates reliever Wil Crowe (3-4) in the sixth and provided some insurance with a n RBI double in the ninth after Pittsburgh intentionally walked Brandon Belt.

The 35-year-old Crawford — a three-time All-Star and two-time World Series champion who entered the day hitting just .219 as he nears the midway point of his 12th season in San Francisco — still bristles when opponents make it a point to face him instead of a teammate.

“I get (the walk) in a way but you definitely want to do some damage up there after something like that,” Crawford said.

Wilmer Flores and Austin Slater homered for the Giants and Luis González added two hits for San Francisco, including an RBI double in the eighth.

Alex Wood (5-5) surrendered a three-run homer to Pittsburgh’s Diego Castillo in the fourth but hung around long enough to win his second straight start. Wood allowed four runs on six hits with two walks and four strikeouts in 5 1/3 innings.

San Francisco reliever Jake McGee got Pittsburgh’s Tyler Heineman to pop out to Flores at first base with the bases loaded to end the eighth after a 10-pitch at-bat to preserve a one-run lead. Camilo Doval retired the Pirates in order for his 11th save and second in two days.

Pittsburgh starter Jose Quintana allowed three runs in 5 1/3 innings before the bullpen let it slip away.

Crowe allowed each of his first four batters to reach on two walks and two singles. Crawford’s liner up the middle scored Thairo Estrada to pull San Francisco even, and pinch-hitter Mike Yaztremski followed with a sacrifice fly to put the Giants in front.

Chris Stratton came on in the eighth and walked the first two batters he faced before giving up a shot to González that scored Darin Ruf as the Giants clinched their first series win against the Pirates since 2017.

Daniel Vogelbach hit his third career pinch-hit home run in the eighth for Pittsburgh and Castillo drove in four runs — tied for the most by a Pirate this season — but it wasn’t enough to blunt the momentum of a June swoon that’s dropped Pittsburgh to a season-worst 14 games below .500 (25-39).

Pittsburgh shortstop prospect Liover Peguero went 1 for 3 in his major league debut. At 21 years and 170 days old, Pegeuro — called up from Double-A Altoona on Friday after infielder Tucupita Maracana was placed on the COVID-19 injured list — became the youngest Pirate to reach the majors since Aramis Ramirez, who was 19 years and 335 days old at the time of his debut on May 26, 1998.

The Giants claimed catcher/first baseman Yermín Mercedes off waivers from the Chicago White Sox and optioned him to Triple-A Sacramento. To make room for Mercedes on the 40-man roster, San Francisco designated catcher Michael Papierski for assignment.

Giants: Alex Cobb (3-2, 5.73 ERA) returns from a stint on the injured list with a strained neck to make his ninth start of the season in Sunday’s series finale.

Pirates: Mitch Keller (2-5, 5.07) is 0-2 in his career against the Giants. Keller has pitched well of late, posting a 2.76 ERA over his last three starts. following a brief stint in the bullpen.