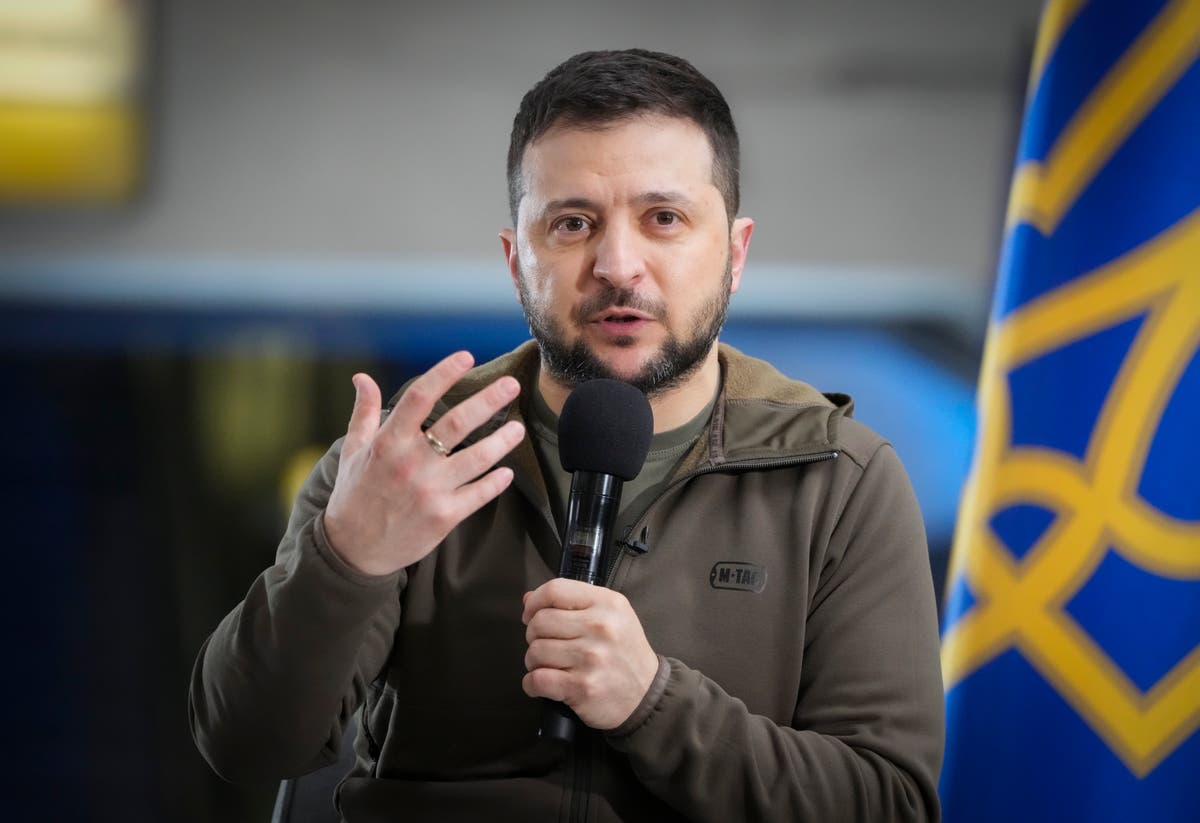 Ukrainian president Volodymyr Zelensky has urged the west to supply his country with more heavy weapons, as Russia continues to bombard the eastern Donbas region.

Speaking on Saturday night, Mr Zelensky said he would meet the US secretary of state Antony Blinken and the US defence secretary Lloyd Austin in Kyiv on Sunday. This will be the first visit by senior American officials to the capital since the war broke out two months ago.

He added that the military equipment received from the west so far had been a big support, but that Ukraine needed long-range air defence systems and more jets.

The day after he made his plea for more military hardware, Mr Zelensky marked Orthodox Easter at the 1,000-year-old St Sophia Cathedral in the Ukrainian capital, drawing on a religious allegory to suggest Ukraine would prevail in the war.

The US state department echoed this message, with its spokesperson telling the BBC: “This is going to be a victory for Ukraine. It is going to be a strategic defeat for Russia. However and whenever that happens, we are confident of that.”

This comes as Russian troops try to capture more territory in east Ukraine, where shelling is said to have intensified in recent days.

On Saturday, the Kremlin’s forces started to attack the Azovstal steel plant, the last Ukrainian foothold in the devastated city of Mariupol, where thousands of Ukrainian soldiers and civilians are holed up.

The assault began two days after Vladimir Putin told his generals not to storm it, but to blockade it instead.

Mr Zelensky said in an interview published on Saturday that if the Mariupol defenders were killed by Russia it could put an end to peace negotiations.

“There are troops there who absolutely hate them, and I don’t think they will let them live,” he added.

His adviser Mykhailo Podolyak called on Moscow to agree to a “real Easter truce”, which would allow civilians to be evacuated from places such as Mariupol.

Amin Awad, the UN’s Ukraine crisis coordinator, called for an “immediate stop” to fighting there, saying that the lives of thousands of trapped citizens were under threat.

“The lives of tens of thousands, including women, children and older people, are at stake in Mariupol,” Mr Awad said. “We need a pause in fighting right now to save lives.”

“The longer we wait the more lives will be at risk. They must be allowed to safely evacuate now, today. Tomorrow could be too late,” he added.

Ukraine’s deputy prime minister Iryna Vereshchuk blamed Russia for the failure to open humanitarian routes out of Mariupol on Sunday.

Ms Vereshchuk called on the UN secretary general Antonio Guterres to demand a ceasefire in Mariupol when he visits Russia next week.

“This is what Guterres should talk about in Moscow, if he is preparing to talk about peace,” she said.

In other developments, eight people were killed in Luhansk province on Saturday in a Russian attack, according to its governor Serhiy Gaidai.

The same number of people died in the Back sea port city of Odesa when two Russian missiles hit a military facility and two residential buildings. A 3-month-old baby was among the dead.

Russia has reportedly suffered “significant” losses in its recent assault in the Donbas, according to the latest British military intelligence.

“Poor Russian morale and limited time to reconstitute, re-equip and reorganise forces from prior offensives are likely hindering Russian combat effectiveness,” it added in a statement on Sunday.